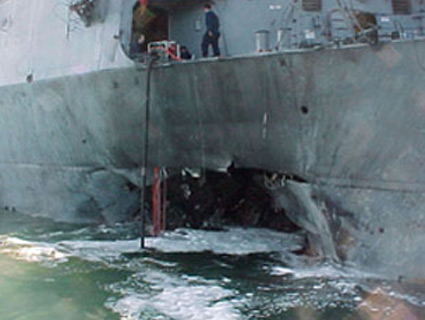 Almost ten years since he was captured, the alleged mastermind of the U.S.S. Cole bombing is closer to getting a trial.

The Pentagon announced Wednesday afternoon that it’s going forward with military commissions charges against Abd Al Rahim Hussayn Muhammad Al Nashiri, accused of planning of the 2000 bombing of the U.S.S. Cole in Yemen, which killed 17 American sailors. Military prosecutors are seeking the death penalty, which will require a unanimous jury verdict, as opposed to the two-thirds majority needed in non-capital cases.

What’s strange is that Nashiri is being charged in a military commission at all. Attorney General Eric Holder originally said that the attack on the Cole “was an attack on a United States warship, and that, I think, is appropriately placed into the military commissions setting.” While the attack occurred after Osama bin Laden’s declaration of war on the United States, it took place prior to the 9/11 attacks, and therefore before the military commissions system was created. The case was investigated as a law enforcement matter—in fact, last year, one of the FBI investigators on the Cole case, Ali Soufan, chastised the Bush administration for not prosecuting Nashiri earlier.

While such obstacles were not unexpected, what surprised us was the lack of support from home. No one in the Clinton White House seemed to care about the case. We had hoped that the George W. Bush administration would be better, but except for Robert Mueller, the director of the F.B.I., its top officials soon sidelined the case; they considered it, according to Paul Wolfowitz, the deputy defense secretary, “stale.” Even the families of the sailors were denied meetings with the White House, a disgrace that ended only when President Obama took office—and a precedent I hope the administration maintains.

Nashiri’s prosecution by military commission may simply be a consequence of his treatment at the hands of American authorities. Nashiri was one of three terror detainees who were waterboarded. He was also subjected to other so-called “enhanced interrogation techniques,” including mock executions involving a gun and a power drill. Despite the fact that Nashiri’s treatment appears to fall outside even the “legal” enhanced interrogation guidelines authorized by the Bush administration, the Obama administration, which conducted an investigation into interrogations that went beyond those guidelines, decided against filing any charges related to Nashiri’s treatment. Since the Obama administration said their intention was to try Nashiri by military commission even before Congress placed restrictions on its ability to transfer Gitmo detainees to the US for trial, it’s a good bet that the reason he’s being tried by military commission has more to do with the fact that the case against him has been marred by torture.

There’s no guarantee of course, that given his past treatment, prosecution by military commission will be any easier. During the trial of former Gitmo detainee Ahmed Ghailani for his involvement in the bombings of US embassies in Kenya and Tanzania, Judge Lewis Kaplan wrote that even in a military commission, the Constitution would likely bar evidence gained through coercive means.