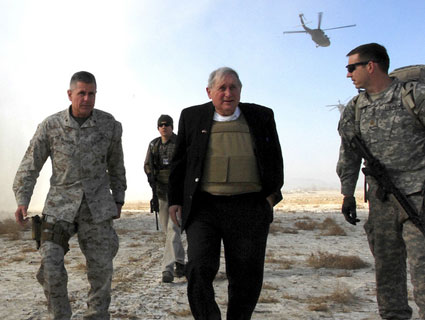 We know from the death of extremist cleric Anwar al-Awlaki last week that Obama administration’s stated authority to kill American citizens suspected of terrorism is no longer a matter of legal theory. What we still don’t know is the administration’s legal rationale for doing so.

Tuesday, Sen. Carl Levin (D-Mich.), the chairman of the Senate armed services committee, told a group of reporters that the administration should release a legal memo drafted by the Department of Justice outlining the government’s legal authority to kill al-Awlaki without charge or trial.

“I would urge them to release the memo. I don’t see any reason why they shouldn’t,” Senate Armed Services Committee Chairman Carl Levin, a key ally of President Barack Obama, told reporters…I support the decision to do it. He has declared war on us, and in war you’re allowed to attack your enemy[.]”

The Washington Post reported last week on the existence of the memo—the disclosure of which is the one issue that both opponents and supporters of the administration’s policy on targeted killing can probably agree. (My colleague Nick Baumann also wrote about the likely existence of the memo—and calls to release it—back in January.) Former Bush-era head of the Office of Legal Counsel Jack Goldsmith called on the administration earlier this week to release a “a redacted version of the opinion, or should extract the legal analysis and place it in another document that can be released consistent with restrictions on classified information.” Georgetown Law Professor David Cole, a critic of the administration’s targeted killing policy, wrote last week that “If we are engaging the enemy within the rule of law…we should have the courage to make our policies transparent, so that the people, both in the United States and beyond, can judge for themselves.”

Administration officials like State Department Legal Adviser Harold Koh and White House Counterterrorism Adviser John Brennan have outlined the administration’s justifications for targeted killing without mentioning al-Awlaki by name. The administration has also spent years leaking information about al-Awlaki’s alleged role in al-Qaeda in the Arabian Peninsula in order to justify targeting him, even as they avoided ever actually indicting him for a crime. Given the administration’s past willingness to release Bush-era memos justifying the use of torture, it’s difficult to imagine how a lack of disclosure here would be justified. Whether or not you believe al-Awlaki’s killing was legal or justified, the legal explanation for how American citizens can be sentenced to death on suspicion of terrorism should not remain a state secret.