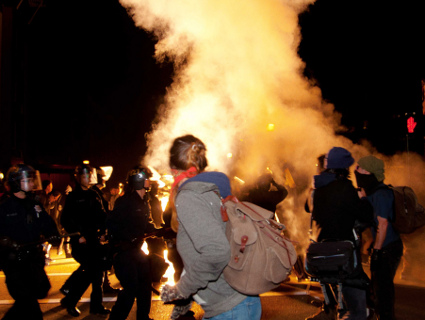 On Saturday, Occupy Oakland re-entered the national spotlight during a day-long effort to take over an empty building and transform it into a social center. Oakland police thwarted the efforts, arresting more than 400 people in the process, primarily during a mass nighttime arrest outside a downtown YMCA. That number included at least six journalists, myself included, in direct violation of OPD media relations policy that states, “Even after a dispersal order has been given, clearly identified media shall be permitted to carry out their professional duties in any area where arrests are being made unless their presence would unduly interfere with the enforcement action.”*

After an unsuccessful afternoon effort to occupy a former convention center, the more than 1,000 protesters elected to return to the site of their former encampment outside City Hall. On the way, they clashed with officers, advancing down a street with makeshift shields of corrugated metal and throwing objects at a police line. Officers responded with smoke grenades, tear gas, and bean bag projectiles. After protesters regrouped, they marched through downtown as police pursued and eventually contained a few hundred of them in an enclosed space outside a YMCA. Some entered the gym and were arrested inside.

See photos of protesters trying to outmaneuver police in downtown Oakland on Saturday.

As soon as it became clear that I would be kettled with the protesters, I displayed my press credentials to a line of officers and asked where to stand to avoid arrest. In past protests, the technique always proved successful. But this time, no officer said a word. One pointed back in the direction of the protesters, refusing to let me leave. Another issued a notice that everyone in the area was under arrest.

I wound up in a back corner of the space between the YMCA and a neighboring building, where I met Vivian Ho of the San Francisco Chronicle and Kristin Hanes of KGO Radio. After it became clear that we would probably have to wait for hours there as police arrested hundreds of people packed tightly in front of us, we maneuvered our way to the front of the kettle to display our press credentials once more.

When Hanes displayed hers, an officer shook his head. “That’s not an Oakland pass,” she was told. “You’re getting arrested.” (She had a press pass issued by San Francisco, but not Oakland, police.) Another officer rejected my credentials, and I began interviewing soon-to-be-arrested protesters standing nearby. About five minutes later, an officer grabbed my arm and zip-tied me. Around the same time, Ho was also apprehended.*

As I waited in line to be processed and transported to jail, Ho approached me with an officer who had released her from custody. The two explained to my arresting officer that I was with the media. “Oh, he’s with the media?” the officer replied, although I had already repeatedly told him as much and my credentials had been plainly visible all night. He appeared ready to release me, until a nearby officer piped in, without explanation: “He’s getting arrested.”

Later, before I was loaded on a police bus with about 50 protesters, another officer told a protester an independent videographer in front of me that he should have left after police issued dispersal orders. When I told the officer that I had attempted to do just that, he asked, “How long have you been out here today?” “Since about 1:30.” Flashing a smile and telling me that he didn’t care I was a reporter, he replied, “We’ve been issuing dispersal orders all day.” Kettled protesters claimed that no orders were issued until they had no means of escape, but in either case the orders were difficult to hear over the commotion of the crowd. 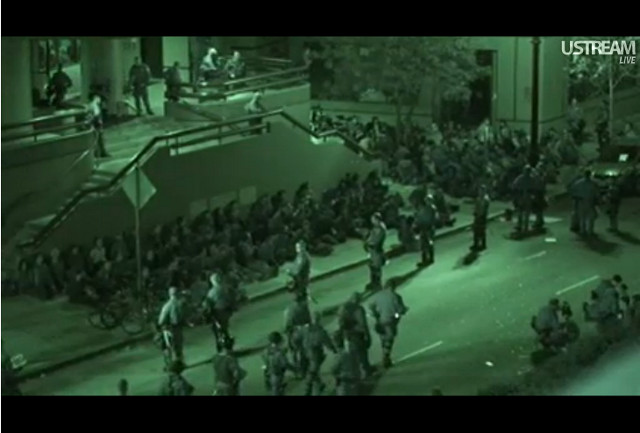 Police round up Occupy Oakland protesters outside a downtown YMCA.: Spencer Mills (@OakFoSho)

As police rounded up protesters into buses outside the YMCA, several occupiers who managed to avoid capture retaliated by vandalizing City Hall. Others protested outside an Oakland jail where the officer driving the bus I was escorted onto had promised to take us, “if you don’t piss me off.” Instead, he had to drive to a county jail in Santa Rita about 40 minutes away. (Officers from at least seven outside agencies came to Oakland in response to the day’s events.)

After spending about an hour locked up alone in a drunk-tank cell block, OPD Sergeant Jeff Thomason arrived to release me, thanks to a call from Mother Jones co-Editor in Chief Monika Bauerlein. “You probably shouldn’t have been in here to begin with,” he told me apologetically as he escorted me in his personal car back to the scene of my arrest to retrieve my backpack where I’d stashed my steno pad. But for the time-being, it was irretrievable under a massive pile of occupiers’ bags in the back of a police van.

At least five other reporters were arrested last night: Hanes, Ho, John C. Osborn of the East Bay Express, Yael Chanoff of the San Francisco Bay Guardian, and graphic journalist Susie Cagle, who was previously arrested during the short-lived occupation of a vacant downtown building following Occupy Oakland’s first port shutdown last November. Chanoff was taken to the Santa Rita jail. The others were all released at the scene. (An officer told Cagle that he was doing her a “favor.”)

Oakland police, who have been instructed ahead of past Occupy Oakland protests not to prevent anyone “claiming media affiliation” from “engag[ing] in activity afforded to media personnel,” particularly “during times of civil unrest,” have also violated department policy on crowd control responding to previous Occupy protests. The ongoing game of cat-and-mouse between police and protesters has frustrated officers forced to work overtime hours at a department that will likely be placed in federal receivership for civil rights violations that predate the Occupy movement. Last week, a federal judge ruled that the OPD remains “woefully behind its peers around the state and nation.”

“The Bay Area Occupy movement has got to stop using Oakland as their playground,” Oakland Mayor Jean Quan said in a statement during last night’s arrests that made no mention of her police department’s lack of regard for journalists’ First Amendment protections. Last week, the United States dropped 27 spots in Reporters Without Borders’ annual press freedom index due to police treatment of journalists covering the Occupy Wall Street movement. By Josh Stearns’ count, more than three dozen reporters have been arrested since the movement began last year in Manhattan.

Correction: An earlier version of this story mistakenly reported that Ho had OPD credentials. She only had credentials issued by the San Francisco Police Department.

Clarification: This quote, taken from a November contingency plan quoting OPD policy, has been updated to more accurately reflect the department’s policy violation Saturday evening and clarify that officers did not appear to be specifically targeting journalists for arrest.