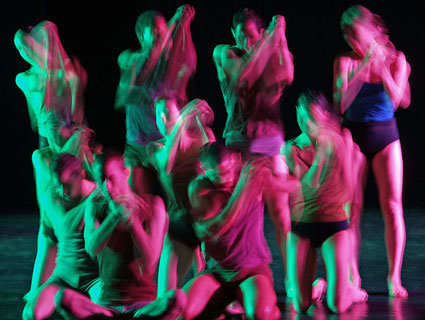 The Israeli contemporary dance company Batsheva has enthralled audiences internationally with its visceral choreography and raw style of movement. Its director, Ohad Naharin, is one of the most renowned choreographers today, his works regularly commissioned by the fanciest opera ballets in the world.

But the company is facing a less-than-warm welcome in many of the stops on its current five-week North American tour on account of the fact that it’s partially backed by the Israeli Ministry of Foreign Affairs, which funds a “Brand Israel” campaign to send artists overseas in order to “show Israel’s prettier face, so we are not thought of purely in the context of war.” In response, protesters have been gearing up to picket outside theaters as the tour heads to the East Coast and Canada. Outside the show in San Francisco on Saturday night, a group of activists with signs and fliers waylaid fans heading inside. Contending that Batsheva was shilling for the Israeli government by whitewashing its cultural image, one protestor likened their campaign to the boycotting that ended apartheid in South Africa. Batsheva’s communications department told me that “Batsheva’s core is art and creation, and as such does not represent governmental policies.”

I’m a big fan of Naharin. The first work I saw of his–Minus 16–blew my mind. His work careens between extremes, both physical and emotional, but he also plays with space and silence, both between bodies and within them. The movement vocabulary he created, called Gaga, is about “moving from sensation” rather than from received ideas of moves or shapes. His dancers, who collaborate actively in his choreography, improvise without mirrors, instead working from metaphors he suggests. This process creates a quality that is raw rather than showy:

The hour-long piece they are touring, Max, is more understated than many of his other works, which walk the knife edge between violence and rapture, but it is unmistakably Naharin. Lacking any defined narrative, the piece segues from scenes of struggle to silliness to pure movement compositions. The dancers, clothed simply in tank tops and briefs, perform endless series of schizophrenic but seamless movements, whether in silent unison, to a heavy beat, or on top of an eerie baritone. Torsos seem to melt from the inside as arms float and palms are sucked inwards to freeze at the waist. Dancers cut arcs with their legs, then crumple to the floor.

While the movement in this work is fierce, it can often feel unemotional. Still, it is sometimes punctured by dramatic moments. One section seems to mirror the role activists allege Batsheva plays as a great artistic institution caught in an ugly geopolitical web. The dancers form a sloped wedge facing the audience, with those in the front on their knees and those in the back standing. In perfect unison they execute a series of frantic gestures with their upper bodies, bobbing heads wildly, slicing angular elbow shapes, clasping hands and slamming them into their chests. Then they abruptly stop and look out at the audience with big false smiles, as if to paper over what just happened. The piece ends with a repeat of this same scene, except the fake smiles are replaced with unison singing: loud and strained and childlike.

Afterwards, I asked audience members for their thoughts on the show and the demonstration outside. Karin Tatoyan, a musician (who, interestingly, is Syrian), said “They may be funded by the Israeli government, and all that has implications, but art is an expression of the human condition, separate from national identity.” Another audience member told me that dance “connects people as humans, no matter who’s funding it.”