The National Rifle Association continues to press more states to adopt Florida-style “stand your ground” laws like the one that’s made it difficult to prosecute George Zimmerman, the self-appointed neighborhood watch captain who shot and killed 17-year-old Trayvon Martin in Sanford, Florida, in late February. Zimmerman has claimed self-defense despite the fact that Martin was unarmed. Since “stand your ground” laws allow people who feel threatened to use deadly force—even if they have an opportunity, as Zimmerman did, to safely avoid a confrontation—Zimmerman has not been arrested or charged. (If you haven’t heard about the Martin case, get the full rundown in our explainer.)

The proliferation of these laws is part of a deliberate lobbying campaign by the NRA. In 2005, at the NRA’s urging, Florida became the first state to pass a “stand your ground” law. Before that, most states required you to retreat from a confrontation unless you were inside your own home. Now 25 states have these “stand your ground” laws, which critics call “shoot first” laws (Gawker’s pseudonymous blogger “Mobuto Sese Seko” calls the laws “a great, legally roving murder bubble”) because they authorize citizens to use deadly force even if the person who makes them feel threatened is, like Martin, unarmed. Here’s a map of the current situation: 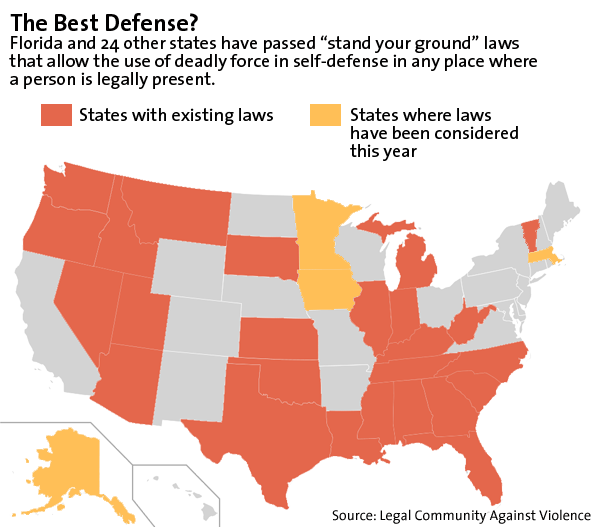 Prosecutors hate “stand your ground” laws because they make it much harder to successfully prosecute people who claim self-defense. In Florida, a defendant doesn’t have to actually prove he acted in self-defense—the prosecution has to prove “beyond a reasonable doubt” that he didn’t do so, a very high bar to clear. The upshot? In 2010, the Tampa Bay Times reported that “justifiable homicides”—i.e., killings that were deemed legitimate—have skyrocketed in Florida over several years since the “stand your ground” law went into effect: 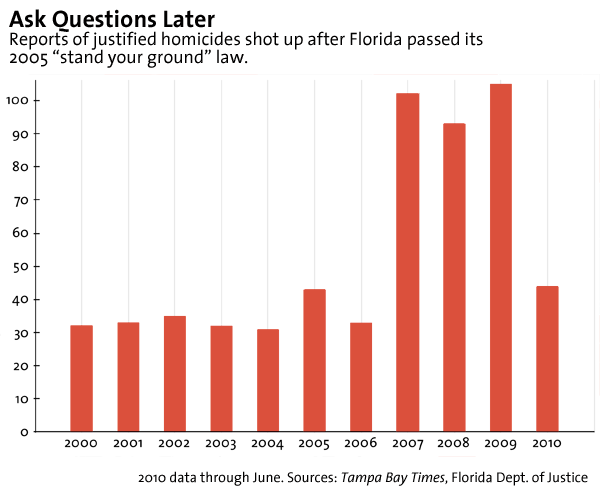 That’s how you end up with stories with headlines like “How to Get Away With Murder.” But the NRA continues to forge ahead, pushing to expand the legislation to even more states.

On March 1, just days after Martin was killed, the NRA’s Institute for Legislative Action posted a blog post urging Minnesota Gov. Mark Dayton (D) to sign a bill bringing a Florida-style law to his state. Dayton vetoed the bill, noting that law enforcement officials had complained it would make it harder for them to do their jobs. Over at Media Matters, Matt Gertz notes several other examples of the NRA pushing these laws in recent weeks:

The Massachusetts legislature’s joint committee on the judiciary held a hearing on yet another similar law in February.