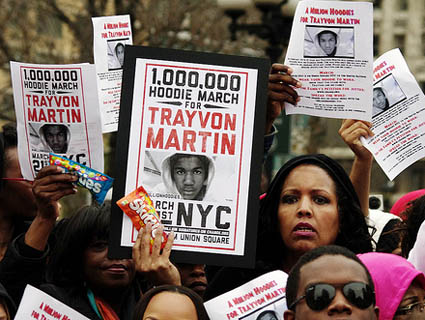 President Barack Obama spoke to the press about slain Florida teen Trayvon Martin on Friday morning, saying, “When I think about that boy, I think about my own kids…. If I had a son, he’d look like Trayvon. I think they are right to expect that all of us as Americans are going to take this with the seriousness this deserves and get to the bottom of what happened.”

That was enough to cause some corners of the conservative media to go nuts.

Following along with theme of racial paranoia set by Glenn Beck’s website The Blaze, conservative media icon Matt Drudge’s page stoked fears of “retaliation,” citing Louis Farrakhan. Conservative columnist Michelle Malkin accused Obama of “political opportunism” and trying to “pour gas on the fire” for empathizing with Martin’s parents. The Daily Caller appears to have discovered the Trayvon Martin case on Thursday of this week, but it had already decided that the most important angle was what the New Black Panther Party thought. Perhaps that was to lay the groundwork for Friday’s piece by Matthew Boyle, which implies a causal link between the Panthers’ outrage and Obama’s remarks on the subject. Going to the New Black Panthers to find out what black people think is like going to the Ku Klux Klan to find out what white people think, except if the KKK were a bunch of clowns who no one cares about instead of a group with a history of racist terrorism.

Obama isn’t the first national political figure to weigh in on the Martin case, but he’s the first to generate a spasm of outrage from the conservative media, which up till now had remained mostly silent. Somehow, both Rep. Allen West (R-Fla.) and former Secretary of State Condoleeza Rice managed to weigh in on the Martin story, both in support of a federal investigation of the incident, without provoking right-wing speculation that they were in league with black separatists.

Sadly, prior to Obama’s remarks the Martin case had avoided being sucked into a partisan vortex. Fox News virtually ignored the issue, and National Review has published several well-considered pieces on the subject. On Friday, Senate Minority Leader Mitch McConnell (R-Ky.) called Martin’s death “an incredible tragedy” and said “I’m glad it’s being investigated and we’ll take a look at it as the investigation moves along.”

I would have preferred the president not weigh in on the Martin case, lest he taint a potential jury trial for George Zimmerman, who maintains he shot Martin in self-defense. But I also suspected that his silence prevented the whole incident from turning into a partisan food fight, with conservatives having to choose between common decency and agreeing with their hated enemy. Because it was obvious, when it came to that, what some of them would choose. Hopefully actual elected officials won’t follow their lead.