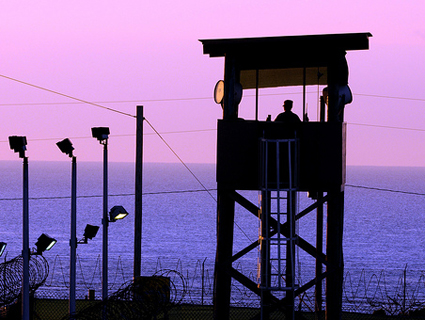 The Supreme Court’s decision on Monday not to hear appeals from a group of Gitmo detainees leaves the remaining 169 detainees at the facility with little chance of securing their freedom through US courts.

In the 2008 case Boumediene v. Bush, the Supreme Court ruled detainees at Gitmo could challenge their detention in US courts. That decision was seen as effectively ending the Bush administration’s attempt to carve out a legal black hole for suspected terror detainees. Shortly thereafter, Gitmo detainees began appealing their detentions—and frequently winning in court. But in the years since the decision, conservative judges on the DC Circuit have interpreted the law in a way that assumes many of the government’s claims are true and don’t have to be proven in court. By not taking any of these cases, the Supreme Court has ensured these stricter rules will prevail. Civil-libertarian groups say that essentially leaves detainees at Gitmo with habeas rights in name only, since the rules make it virtually impossible for detainees to win in court. A Seton Hall University School of Law report from May found that, prior to the DC Circuit’s reinterpretation of the rules, detainees won 56 percent of cases. Afterwards, they won 8 percent.

Others, such as the Brookings Institution’s Benjamin Wittes, have argued that more detainee losses don’t mean the new standards are unfair. In May, Wittes wrote, “I don’t think one can simply assume that a world in which detainees aren’t winning is a world in which review is meaningless either. Maybe, just maybe, it’s a world in which a lot of detainees are more likely than not—based on the available materials—’part of’ enemy forces.”

It only takes four votes to ensure a case gets heard. That means one of the four Democratic appointees on the court voted not to hear the detainee cases. As the American Prospect‘s Scott Lemieux notes, why that happened will remain a subject of speculation: Either one of the four Democratic appointees fears that the Supreme Court might make the situation worse, or they concur with what the DC Circuit has done. Some other configuration of six “no votes” is also possible. The result is the same regardless: The decision means that the DC Circuit’s de facto reversal of Boumediene will stand, leaving Gitmo detainees with very slim chances of securing their freedom by challenging their detention in court.

The Obama administration shares some of the blame for this result. As a presidential candidate in 2008, then-Sen. Barack Obama praised the Boumediene decision. Earlier this year, his administration urged the Supreme Court not to take the Gitmo detainees’ appeal, leaving in place legal standards that civil libertarians argue render Boumediene almost meaningless.

Gitmo detainees have now lost virtually every avenue—other than dying in detention—for leaving the detention camp. Congress has curtailed transfers to other countries by making the restrictions on them nearly impossible to meet. Gitmo detainees can’t be brought to the United States for trial in federal court. And the Supreme Court has now effectively blessed legal standards that make success in court almost impossible. There are now 169 detainees left at Gitmo, and like the facility itself, they aren’t going anywhere.