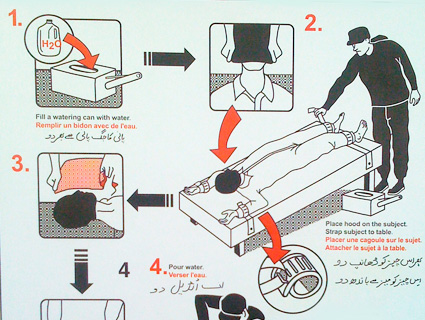 Human Rights Watch has released a report suggesting that waterboarding, a form of torture that President George W. Bush’s administration insisted was only practiced on three detainees, was more widespread than previously known.

The report mostly focuses on the counterterrorism relationship between Moammar Qaddafi’s Libya and the Bush administration, in particular the US’s practice of handing over suspected terrorists to Libyan authorities to be tortured. Human Rights Watch (HRW) interviewed 14 former detainees, most of them ex-members of the militant Islamist Libyan Islamic Fighting Group, which resisted Qaddafi and had been designated a terrorist organization by the US government in 2004. A few ex-LIFG participants joined al Qaeda, but by 2009 several of the group’s former members were publicly distancing themselves from Osama bin Laden’s terror syndicate.

If true, the allegations made by the former detainees would mean that the Bush administration tortured more prisoners in American custody than previously acknowledged:

One former detainee, Mohammed Shoroeiya, provided detailed and credible testimony that he was waterboarded on repeated occasions during US interrogations in Afghanistan. While never using the phrase “waterboarding,” he said that after his captors put a hood over his head and strapped him onto a wooden board, “then they start with the water pouring… They start to pour water to the point where you feel like you are suffocating.” He added that, “they wouldn’t stop until they got some kind of answer from me.” He said a doctor was present during the waterboarding and that this happened numerous times, so many times he could not count. A second detainee in Afghanistan described being subjected to a water suffocation practice similar to waterboarding, and said that he was threatened with use of the board. A doctor was present during his suffocation-inducing abuse as well.

Bush administration officials and torture apologists had defended the use of waterboarding in part by arguing that its use was limited and that those who were subject to it—Abu Zubaydah, Khalid Sheikh Mohammed, and Abd-Rahim Al-Nashiri—were among the most hardcore al Qaeda-affiliated detainees in US custody. (The claims about Zubaydah’s connections to al Qaeda, in particular, turned out to be exaggerated.) Shoroeiya and the other detainee who described treatment similar to waterboarding, Khalid al-Sharif, were captured in Pakistan in 2003. The HRW report states that al-Sharif is now head of the Libyan National Guard.

When approached by the New York Times about the interviews, the CIA had a very curious response:

Asked about the reported fourth case of waterboarding, a C.I.A. spokeswoman, Jennifer Youngblood, said, “The agency has been on the record that there are three substantiated cases in which detainees were subjected to the waterboarding technique under the program.”

As Lawfare‘s Benjamin Wittes notes, Youngblood’s construction leaves “open the possibility that there may have been unsubstantiated additional cases of waterboarding outside of the agency’s formal high-value detainee interrogation and detention program.” Anyone involved in such cases, however, may have little to worry about: In keeping with the president’s stated policy of “looking forward” when it comes to torture, the Obama administration declined last week to prosecute individuals involved in the deaths of two detainees in US custody. Though the president banned the use of techniques like waterboarding his first few days in office, the fact that no one has been held accountable for their use means that a future president—like say Mitt Romney—could allow the United States to torture again.