As news broke of the Newtown school shooting, horror and grief transcended party lines. But for some conservatives, the shooting—and the ensuing calls for reassessing gun policies—also presented a political challenge. Some notable tweets:

.@hyperboledetect Gun Control is not aimed at criminals. It is aimed at the law-abiding only. The liberal dream is us disarmed & docile.

Liberals believe the world should be free of evil, and that step one is preventing good people from resisting it. #caring

Let’s regulate knives too. You can’t have steak knives in your kitchen anymore because a crazy person may stab someone with it.

Thanks to Obama, most schools can no longer afford appropriate security.

Despite heavy gun laws, newly-instituted security procedures, left blames the weapons rather than the monster who killed children.

Some suggested that the fix is not fewer guns, but more:

Only one policy has ever been shown to deter mass murder: concealed-carry laws. – bit.ly/VGDNBo

Somebody else shooting that guy would have stopped him. Yes. Dead in his tracks before the tragedy grew larger. @patchesmc

In just the past four years, the NRA has helped pass weaker gun restrictions in 37 states, making the weapons easier to own, carry and conceal. At the same time, the number of mass shootings has increased in America.*

HUCKABEE: Ultimately, you can take away every gun in America and somebody will use a gun. When somebody has an intent to do incredible damage, they’re going to find a way to do it… People will want to pass new laws, but unless you change people’s hearts, they’re our transition to the pastor side. This is a heard issue, it’s not something, laws don’t change this kind of thing.

CAVUTO: How could God let this happen?

HUCKABEE: Well, you know, it’s an interesting thing. When we ask why there is violence in our schools, but we’ve systematically removed God from our schools. Should we be so surprised that schools have become a place for carnage because we’ve made it a place where we don’t want to talk about eternity, life, responsibility, accountability? That we’re not just going to have to be accountable to the police, if they catch us. But one day, we will stand in judgment before God. If we don’t believe that, we don’t fear that.

Bryan Fischer of the American Family Association took a similar tack on his radio show today, claiming that God has abandoned our schools because prayer is no longer allowed.

Fischer tweeted this too:

We’ve spent 50 years kicking God out of our public schools, then wonder why he’s not around when we need him. 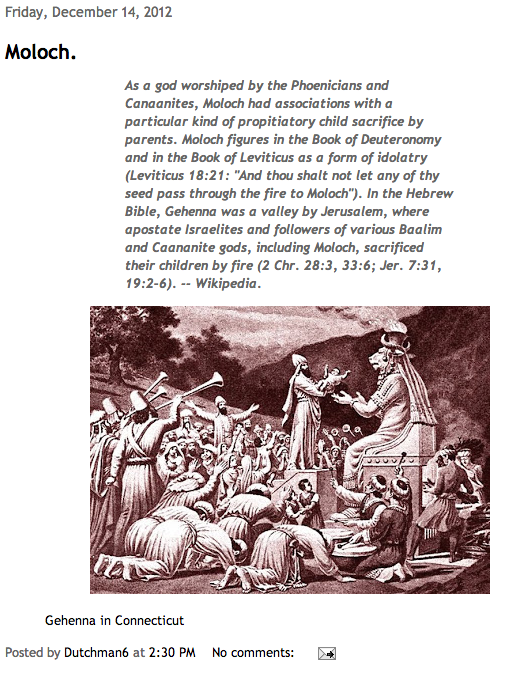 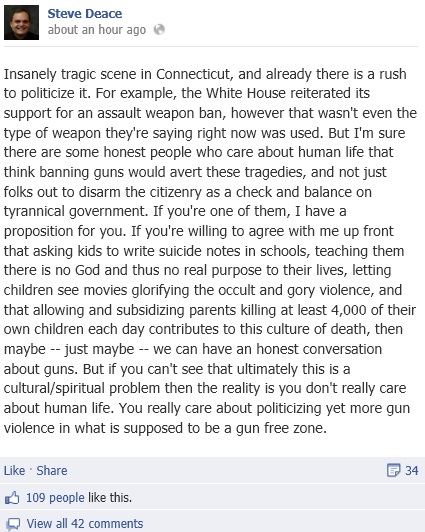 Deace wasn’t the only one who lashed out against people who speaking against gun laws. Michelle Malkin’s aggregator account, Twitchy, offered this:

Rush Limbaugh struck a related note on his radio show:

And even as we speak, the Drive-By Media and the Democrats are attempting to politicize the issue to advance their own agenda. In this case, probably an assault on the Second Amendment again. I guarantee you that they are overturning everything they can in their quest to be able to blame this on Republicans. This, to them, is an opportunity.

I’m going to have some class and avoid this political fight today, but it’s important to show what Bloomberg is saying and now pushing for in the wake of tragedy.

(After the Aurora shootings, our colleague Adam Serwer weighed in on why national tragedies are political.)

Brandon Darby, an one-time radical leftist turned FBI informant had yet another takeaway:

I’m a little bit more of a homeschooling advocate today than I was yesterday.

NewsBusters, which is devoted to responding to liberal media bias, hasn’t addressed the shooting at all on its homepage. This screenshot was taken at 3:45 PM PST. 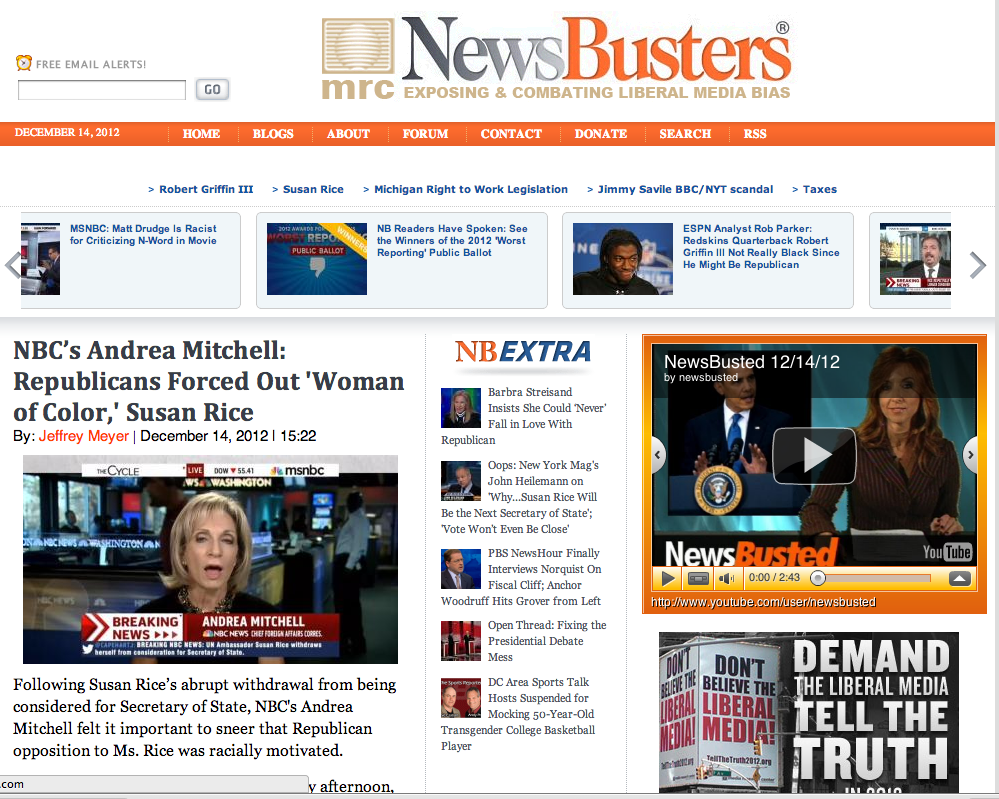 And the NRA? It has been silent since this tweet, just before news of the Newtown shooting broke.

Meanwhile, The Daily Caller‘s Tucker Carlson has moved on:

Here’s a counterintuitive view. The pleasures of whaling: dailycaller.com/2012/12/13/the…

Correction: An earlier version of this article incorrectly stated that gun violence has increased.