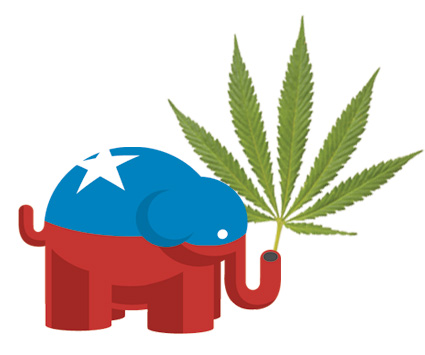 Indiana Gov. Mitch Daniels told National Review that he believes federalism “is, first and foremost, a protection of liberty” and that, without specifically endorsing the legalization of marijuana, he believes Washington and Colorado “under our system, had a right to do it.”

This is federalism in action, according to the Republican governor. “A lot of the worst problems we’ve got in this country, and some of the worst divisions we have, came when the right of citizens in community and in politics, like their state, had those rights usurped by the federal government,” Daniels said. “And having disagreed with it when it happened on other occasions, I sure wouldn’t call for it here.”

Now, I won’t come right out and say that federalism is an inherently bad thing. After all, I’d rather see the war on drugs suffer a setback on a state-by-state level than not at all. Still, I can’t help but be reminded of the many ways that so-called “states’ rights” federalism has been used to strip away much more fundamental human rights. This includes the fact that someone in Indiana today would still face a far harsher penalty under current drug laws than Daniels faced when he was busted for possession as a young man.

Indeed, federalism is a double-edged sword, and as the saying goes, it can cut both ways. And more often than not it has been damaging to the nation.

The elephant in the room is, of course, slavery. At no point in America’s history has the federal government so “usurped” the power of the states than during the Civil War. The Southern states’ right to secede, in order to carry on the “right” to own slaves, is perhaps the clearest example of states flexing their muscle, but there are others.

The state-by-state effort to grant gay couples the right to marry has taken a distinctly federalist shape in recent years, with one after another adopting equality laws. This is a liberal manifestation of federalism, much like state-by-state marijuana liberalization has a distinctly liberal flare to it.

But federalism has not been enough to attain clear victory in either case. It’s not enough that gay couples can enjoy marriage rights in one state but in another would not be given hospital visitation rights for a spouse. It’s not enough that when states like Washington legalize gay marriage, companies such as Boeing can simply decide not to offer same-sex pension benefits to gay employees. (Soon the federal government will get more involved.) And it’s not enough that citizens in Colorado can enjoy marijuana consumption without the threat of prison hanging over their heads while citizens across the rest of the country (and in countries like Mexico) face the full brunt of the war on drugs.

Meanwhile, federalism takes on a much more dubious role in states like Arizona and Alabama, which have unilaterally decided that enforcing immigration laws is now magically the role of state and local governments. In Roe v. Wade, the Supreme Court effectively curtailed federalism over the issue of abortion, though in recent years an onslaught of more and more onerous regulations of reproductive rights has given rise to a new federalist push to take the choice out of the equation for as many women as possible.

Federalism is inefficient as well. The Affordable Care Act was designed to give each state the power to create its own exchange program, allowing each to craft its own version of the health care exchanges so long as they met the bare minimum standards. This only makes sense in the most abstract of terms. Much like there is little reason to have states administer Medicaid, as opposed to the federal government, there is no logical reason to leave the health care exchanges in the hands of the states.

Of course, many conservative states are already declining to set up these exchanges, so citizens of those states will be able to participate in exchanges designed and administered by the federal government instead.

Meanwhile, in education we have designed a system that gives each state the capacity to set its own standards and measure its own success, leading to an almost impossible labyrinth of test scores and results. The federal government plays carrot and stick with the states, because too often in a system dependent on federalism the federal government will need to resort to threats and bribes in order to carry out even the simplest of tasks.

So while I celebrate the legalization of marijuana and gay marriage across the country, I hesitate to cheer on the movements as federalist victories. Gov. Daniels said he hoped people would be consistent in their support for federalism. He’s right about that. But there’s no way I can consistently support the actions of states across this country when that also means gutting women’s rights, creating terrifying immigration laws, or stamping down on the right of workers.