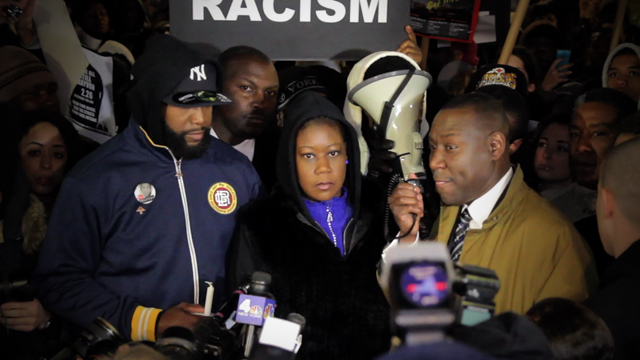 A few hundred demonstrators chanted “Hoodies up! Hoodies up!” in New York City’s Union Square earlier tonight to mark the exact minute that Trayvon Martin, an unarmed 17-year-old, was shot and killed by Florida neighborhood watch volunteer George Zimmerman one year ago. Zimmerman was ultimately charged with second-degree murder in the case, which sparked a national debate over racial profiling.

Dark hoodies drawn over their heads in remembrance of what their son was wearing that night, Trayvon’s parents stood with their lawyer, Benjamin Crump, and Oscar-winning actor Jamie Foxx to lead a candlelight vigil that doubled as a call to action against profiling, gun violence, and the proliferation of so-called Stand Your Ground laws.

“This is a somber day for us,” said Trayvon’s father, Tracy Martin, with the help of a bullhorn. “This is a day that won’t be forgotten. It seems like yesterday that Trayvon was here.”

Foxx spoke briefly and quietly: “We had a moment together,” he said of his meeting with Sybrina Fulton, Trayvon’s mother. “I want you to know this is a personal thing.” He promised to use his fame to help push for justice in Trayvon’s case. Crump told demonstrators that Foxx had flown in from Los Angeles especially to meet with the family on the one-year anniversary. Foxx sang a short tune, “No weapon formed against you shall prosper,” before concluding, “We love you.” He hugged the pair. 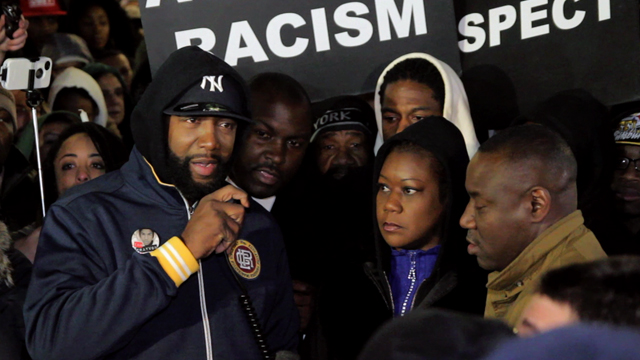 Martin thanks the crowd in Manhattan’s Union Square. James West

Trayvon’s parents led the crowd in a minute of silence. People bowed their heads and closed their eyes. It was the only moment Fulton looked unruffled by the horde of reporters, leaning close to Crump.

As the clock struck 7:17, the moment the killing took place, Fulton and Martin spoke a short prayer in unison over the bullhorn: “We remember Trayvon Martin. Gone but never forgotten.” The words were repeated several times by the crowd, a mix of activists. protesters, and New Yorkers on their way home from work.

Fulton then began to count, “One… two…” As the minute came to a close, and rain began to fall, she said, “three,” and everyone blew out their candles and cheered. 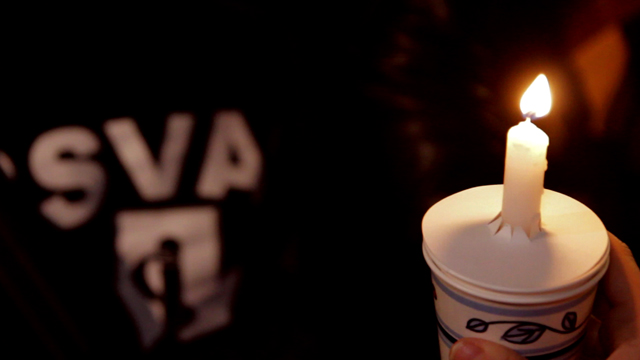 A participant holds a candle at the Trayvon Martin vigil. James West