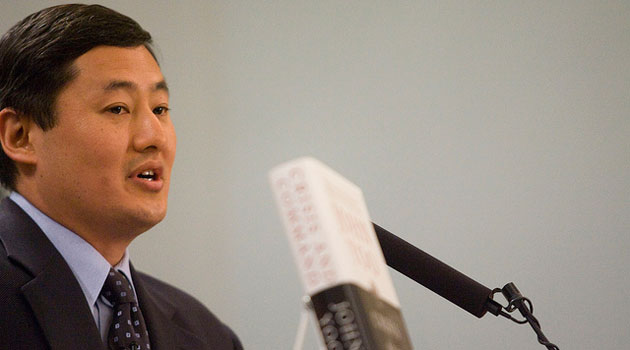 Torture memo author John Yoo and others who have called for Boston marathon bombing suspect Dzhokhar Tsarnaev to be held in military detention are claiming vindication following reports that Tsarnaev stopped talking to interrogators after a judge advised him of his right to remain silent.

“Apparently the FBI interrogated the younger Tsarnaev for 16 hours,” wrote torture memo author John Yoo at National Review. “And then, for reasons that are still unknown, the government read him his rights.”

Yoo has never met a right he didn’t want to ball up like a piece of paper and toss into a trash can in the name of national security. But despite being an attorney and professor at the prestigious University of California Berkeley School of Law, Yoo is either misleading his readers about why Tsarnaev was read his rights or unaware of a basic legal rule.

The judge appeared at the hospital because the Federal Rules of Criminal Procedure state that suspects have to be brought before “a magistrate judge, or before a state or local judicial officer” and it must be done “without unnecessary delay.” The Supreme Court has held that, absent exigent circumstances or the suspect waiving the right to go before a judge—as wannabe Times Square bomber Faisal Shahzad reportedly did—a suspect has to appear before a judge within 48 hours of being apprehended. This is usually referred to in legal shorthand as “presentment,” as in, “presentment before a judge.”

“In practice, this means that law enforcement officers usually have no more than 48 hours to interrogate suspects without [informing them of their rights], and usually far less,” explains Steve Vladeck, a law professor at American University School of Law. “Once presentment occurs, the judge, if not the interrogating officers, will advise the suspect of all of his rights.”

That’s what happened in this case. Tsarnaev’s interrogators didn’t read him his rights. Nor did the “Obama administration,” as some, including Sen. Dan Coats (R-Ind.), have claimed. A judge did it. The 48-hour rule exists to prevent the government from detaining people secretly and without a suspect knowing the charges against them. Needing to interrogate a suspect is not included in the exigent circumstances that can be used to justify delaying bringing the suspect before a judge. And the government could not have legally placed Tsarnaev in military detention, either, because absent evidence of concrete operational connections between Tsarnaev and Al Qaeda or its affiliates it would not be legal to do so—and it might not be constitutional even if it were technically legal.

“This is a rule of law issue, and it’s also an effectiveness issue,” says Hina Shamsi, an attorney with the ACLU. “Calls to do an end-run around constitutional rights are not just wrong they prevent a fair and effective prosecution.”

The feds have every reason to play this one by the book. Few things could compound the tragedy of Boston like jeopardizing Tsarnaev’s prosecution because of a rush to trample his constitutional rights.