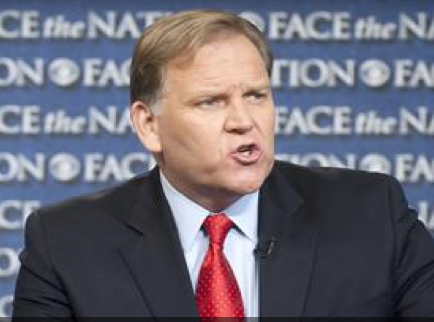 The FBI Agents Association, which represents thousands of active and retired FBI agents, announced Monday that it wants Rep. Mike Rogers (R-Mich.), the chairman of the House intelligence committee, to be the next head of the FBI. If nominated by President Obama, Rogers would take over from Robert S. Mueller III, whose term ends in September. Konrad Motyka, president of the Association, said in a statement that Rogers “exemplifies the principles that should be possessed by the next FBI director.” What are those principles? Here’s where Rogers stands on four key civil liberties issues:

Rogers introduced the Cyber Intelligence Sharing and Protection Act (CISPA), not once, but twice (the bill has so far failed to advance through the Senate both times.) CISPA aimed to beef up US cybersecurity efforts by lowering the legal barriers that keep the government and tech companies from openly sharing your personal information. As dozens of privacy groups pointed out, this meant that companies like Facebook and Google could potentially give the content of your emails to government agencies without a search warrant or court order. As this handy infographic from Boing Boing shows, under CISPA, you wouldn’t necessarily need to be suspected of crime for the government to see your emails—being the unlucky target of a few key search words, like “marijuana,” could be enough.

Since February, prisoners at the Guantanamo Bay Detention Center have been on a hunger strike to protest conditions at the prison. President Barack Obama has acknowledged that Guantanamo is a “lingering problem that is not going to get better, it’s going to get worse. It’s going to fester.” Obama has put some of that blame on Congress. Rogers is one of the lawmakers who has blocked US funds from being used to transfer prisoners out of Guantanamo. He has said, of terrorism, “We do not need [famed federal Prohibition agent] Eliot Ness on the battlefield; what we need is Gen. George S. Patton.”

In a March op-ed published in U.S. News and World Report, Rogers criticized the Obama Administration for trying Sulaiman Abu Gaith, a man identified as Osama bin Laden’s son-in-law, in a federal New York City court: “Recognizing we are at war means understanding it is dangerous and ineffective to bring the enemy to the United States, to grant him the same rights as U.S. citizens standing trial, including Miranda rights, the right to remain silent, and the right to a U.S. taxpayer funded attorney.”

When Boston Marathon bombing suspect Dzhokhar Tsarnaev, a US citizen, was read his Miranda Rights, Rogers called the decision “confusing…horrible, [a] God-awful policy, and dangerous to the greater community.” As my colleague Adam Serwer notes, “the only thing more embarrassing than being a federal prosecutor who doesn’t understand the federal rules of criminal procedure is being a former FBI agent who doesn’t understand them.”

As congressman, Rogers has supported extending the Patriot Act’s “roving wiretaps“, waiving the requirement to have a warrant under the Foreign Intelligence Surveillance Act (FISA) for wiretapping at home and abroad, and allowing electronic surveillance without a warrant.

Even though President Obama could hypothetically use drone strikes to kill US citizens on American soil, and reports show the program has minimal congressional oversight, Rogers isn’t concerned: “I as chairman review every single air strike we use in the war on terror, both on the civilian and the military side when it comes to terrorist strikes,” he told The Hill in February. “There’s plenty of oversight there.”