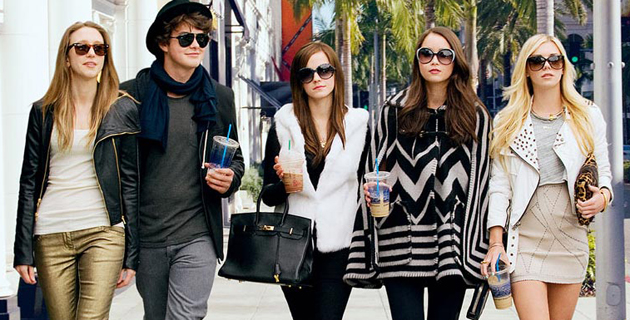 Emma Watson is developing a habit of robbing the homes of Hollywood celebrities. Earlier this month, ensemble comedy This Is the End (sort of a Left Behind for potheads) hit theaters. That film, set in Los Angeles during the Rapture, features Watson brandishing a gigantic ax and angrily stealing food from James Franco‘s house. In The Bling Ring, Watson assumes a similar role, burglarizing the homes of Lindsay Lohan, Paris Hilton, Megan Fox, Rachel Bilson, and Audrina Patridge.

Watson plays Nicki, one-fifth of the “Bling Ring,” a group of disaffected, bored, fashionista teenagers who decide to rob the houses of famous people. (The rest of the crew is played—with commendable Valspeak dedication—by Katie Chang, Claire Julien, Taissa Farmiga, and Israel Broussard.) Their months-long crime spree snags them a small fortune in jewels, clothing, booze, and designer bags.

As you might have heard, this film is based on actual events. Writer/director Sofia Coppola adapted journalist Nancy Jo Sales‘ amazing 2010 Vanity Fair article (now a 268-page book) profiling the Bling Ring, a.k.a. the “Hollywood Hills Burglar Bunch.” And Coppola did so in a way that emphasizes blunt sentiment and sly commentary over exploitative cinematic impulses. “Sofia and I met several times over the year she was writing the script,” Sales writes in an email. “I was a fan of the director’s and knowing her work there’s no way it could have turned into an exploitation flick…It’s a dark story, a cautionary tale.”

A predictable avalanche of infamy and giddy public fascination followed the arrests of the real-life Bling Ringers. “Think of a major news organization and they were [at the Bling Ring hearings],” Sales says. “The New York Times put it on the cover of the Sunday Styles section.” What followed the requisite press coverage was a cyclone of ill-gotten, reality-TV-abetted fame that wasn’t so much a train wreck as it was a heaving paroxysm of America’s worst voyeuristic and material tendencies. (To understand exactly what I mean, watch this psychotic slice of television.)

Sofia Coppola wanted to do everything she could to avoid further fueling the stardom of the real-life Bling Ring—hence her script’s heavy fictionalization and the name changes. For the same reason, I’m declining to print the Bling Ring members’ real names, and will not delve into their post-arraignment exploits. Instead, I will direct you to Sales’ riveting Vanity Fair story and encourage you to watch the film’s insane trailer here:

The movie is artful and wickedly fun, and pulled off with a welcome maturity. To get her cast in character, Coppola had them stage a mock home invasion. “I believe it was her sister-in-law’s house,” The Bling Ring star Israel Broussard tells me. “She gave us a detailed list, by brand name, color, designer of the cloths we needed to get in the closet, shoes, handbags…[Sofia] gave us an address, the list, and told us to hop in the minivan and go!” The scene in which the Bling Ring raids Paris Hilton’s house was filmed on-site—the socialite opened up her Beverly Hills mansion for the cast and crew to recreate the robbery. Hilton’s home is located in a mega-wealthy gated community where film crews aren’t permitted. So Coppola and company had to sneak in, shoot the sequences, and get the hell out of Dodge. “[Paris] was very gracious,” Broussard says. They then made their swift getaway—an exit befitting the story of the adolescent gang they unlovingly portray.

The Bling Ring gets released on Friday, June 21. The film is rated R for teen drug and alcohol use, and for language including some brief sexual references. Click here for local showtimes and tickets.