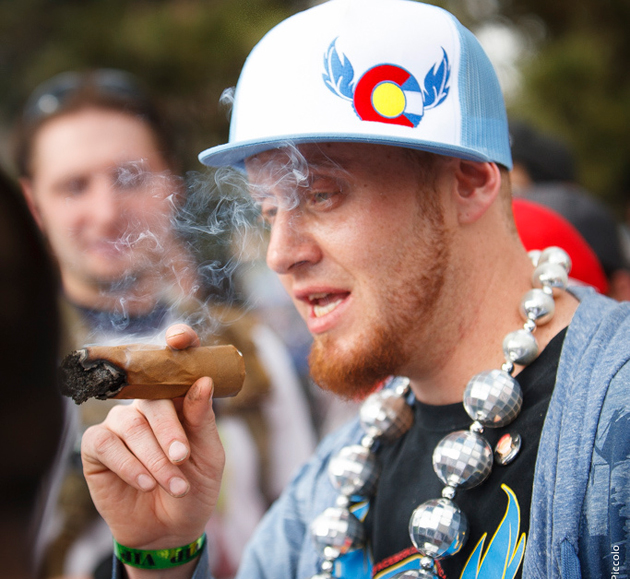 In a memo released this afternoon, the Department of Justice signaled that it will not meddle with state efforts to legalize and regulate the consumption and sale of pot. “Basically what it says is that the federal government is waving a white flag,” says Dan Riffle, the director of federal policies for the Marijuana Policy Project (MPP). “Today’s announcement is a major historic step toward ending marijuana prohibition.”

The federal government typically hasn’t prosecuted individual pot smokers, but the memo breaks new ground by applying a similarly permissive approach to marijuana dispensaries, which have often been the targets of federal raids. Under the new policy, the DOJ will leave recreational and medical pot dispensaries alone in states that it believes are regulating them adequately.

Prosecutors “should continue to review marijuana cases on a case-by-case basis,” the memo says, “and weigh all available information and evidence, including, but not limited to, whether the operation is demonstrably in compliance with a strong and effective state regulatory system.”

The DOJ signaled that it will allow Colorado and Washington to proceed with legalizing and regulating the sale and recreational consumption of marijuana so long as they can prevent:

“Those are all reasons we’ve cited for why we should tax and regulate marijuana,” the MPP’s Riffle points out.

But other pro-marijuana activists are concerned that the memo gives federal prosecutors too much leeway. In particular, it’s not clear whether the feds will stop prosecuting pot dispensaries in California. Unlike Colorado and Washington, California provides little state-level oversight of its medical pot industry, relying instead on a patchwork of local laws.

“I certainly hope that it applies to us and I certainly think it should, but we will need to wait and see,” says Steve D’Angelo, founder of Harborside Health Center, a large and respected pot dispensary in Oakland that has been the target of federal raids. Last year, the DOJ filed a civil suit against Harborside’s landlords, seeking to seize buildings it rents in Oakland and San Jose. The case prompted the City of Oakland to countersue the DOJ on Harborside’s behalf; the matter is now before the 9th Circuit Court of Appeals.

“Our experience with the Obama administration so far has been lots of double-talk.”

It’s also not clear how the memo will influence other federal agencies that have targeted California dispensaries. The Internal Revenue Service has prosecuted the dispensaries under a clause of the tax code that prevents drug traffickers from deducting business expenses such as rent and payroll. The Treasury Department has told credit card processors they can’t work with the pot shops. And the Drug Enforcement Administration recently told armored-car companies that they can’t carry cash from medical marijuana sales.

“While we’re hopeful that the Justice Department will adhere to these policies” in the memo, Steph Sherer, the executive director of a group called Americans for Safe Access, said in a press release, “our experience with the Obama administration so far has been lots of double-talk.”

Either way, Riffle believes the DOJ memo will put pressure on lawmakers to amend our national drug policy. “Rather than have the administration ignore a broken law,” he says, “it is time for Congress to go in and fix it.”