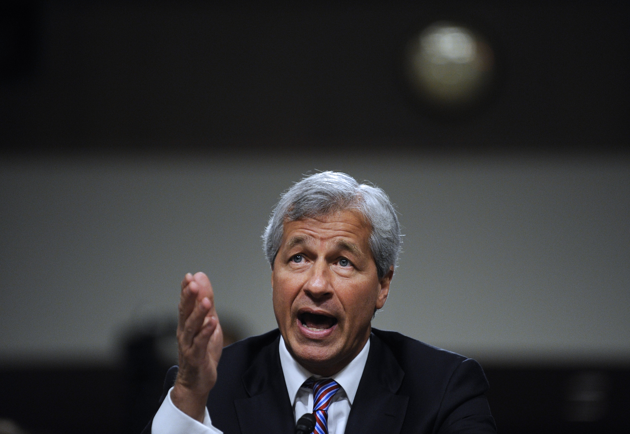 JPMorgan Chase is probably going to have to pay a record $13 billion fine because it created and sold dicey financial products that helped cause the financial crisis that sparked an economic crash in 2008. JPMorgan CEO Jamie Dimon has groused that this an unfairly large sum. But some experts beg to differ, noting that if the world were fair, Dimon’s bank would have to pay a lot more.

On Saturday, JPMorgan reached a tentative deal with the Department of Justice, which has investigated the megabank for having packaged poor quality mortgages into securities that it sold to investors. (Some of the securities were peddled by Washington Mutual and the investment bank Bear Stearns, two failing firms that JPMorgan absorbed in 2008.) The $13 billion penalty, which is not yet final, would cover about $9 billion in fines paid to the federal government and $4 billion in relief for struggling homeowners. It would be the largest penalty that a single company has ever paid in settling a case with the Justice Department.

The historic deal is a sign that the Obama administration’s crackdown on Wall Street is finally gaining steam. But experts note that the $13 billion fine—which seems a gargantuan amount—is not nearly enough. First, the fine is really only $9 billion, says William Black, an associate professor of economics and law at the University of Missouri-Kansas City and a former bank regulator who led investigations of the savings and loan crisis of the 1980s. The $4 billion in relief to homeowners, he explains, represents loan modifications that the bank would have made in any event to minimize losses and avoid foreclosures. (And that $9 million, he adds, is tax-deductible.) Second, Black says, the total damages JPMorgan, Washington Mutual, and Bear Stearns inflicted directly on purchasers of the shoddy mortgage-backed securities is estimated to be $100 billion. “The normal rule in terms of remedies for frauds of this scope,” he says, “is that you pay for your damages that you caused.” And if those damages were caused by fraud as opposed to mere negligence, Black adds, the US legal system often makes the fraudster pay punitive damages of at least twice that amount. “A normal recovery would be in the range of $200 billion,” he says.

But that would likely bankrupt JPMorgan, and, Black notes, “there’s absolutely no chance the the Justice Department is going to seek a recovery remotely that large.”

Consumer advocates are concerned about how the $4 billion will be parceled out to homeowners. In other settlements related to the financial crisis, such as the $25 billion agreement with five major banks in 2012 regarding flawed foreclosure practices, much of the money that has been dispensed so far provided “relief” that benefited banks more than homeowners.

“The history of the Obama administration is the they make these announcements of big numbers, but they do not benefit homeowners,” says Bruce Marks, the CEO of the Neighborhood Assistance Corporation of America, a major housing counseling group.

Kevin Whelan, an advocate at the Home Defenders League, a housing advocacy group,  hopes the JPMorgan settlement will be different. “If it’s $4 billion that really helps reduce principal for underwater loans in communities that were hardest hit by predatory lending, it’s certainly not going to fix all the damage caused, but it would be noticeable relief for families,” he says.

Parts of the deal are still being ironed out, including how much wrongdoing JPMorgan will admit.The civil settlement does not prevent a criminal inquiry from going forward; that’s a victory for consumer advocates.

JPMorgan has had many troubles in recent years, falling under scrutiny from multiple federal and state regulators for issues including multibillion-dollar trading losses, poor money-laundering controls, and the possible manipulation of power markets.

Marks says that the penalty leveled against JPMorgan are steps in the right direction, but ensuring banks don’t screw homeowners again will require more severe measures. “It’s good to send a message to the banks,” he says, “but this is no skin off their backs because they make money hand over fist… The message needs to be prosecution and jail time.”