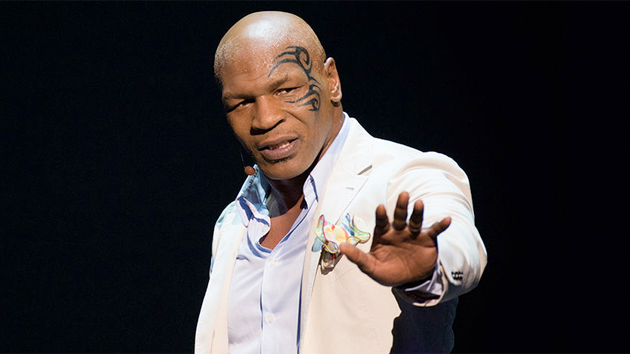 Mike Tyson: Undisputed Truth affords Mike Tyson yet another big opportunity to open up. Spike Lee‘s new film (premiering Saturday at 8 p.m. ET/PT on HBO) documents the controversial boxing legend’s one-man Broadway show. Tyson—sharply dressed, sweaty, charismatic—commands the stage for an hour and a half, dishing on his public and private ups and downs. (The show was written by his wife, Kiki Tyson.)

“I came from the gutter,” he says to the packed theater. He discusses (in full-on emotional vulnerability mode) his rough childhood and deaths in the family; his star-making fights and his history of substance abuse; his adrenaline rushes and his rude awakenings. He cracks a lot of cheap jokes, including one about Mitt Romney‘s whiteness and one about George Zimmerman.

This documentary and one-man show are the latest steps in his years-long effort to reinvent himself. Instead of a drug-addled, off-putting, ear-chomping fighter, he’s now a sensitive, vegan funnyman who writes for New York magazine, appears in the Hangover franchise, dances with Neil Patrick Harris and Bring It On cheerleaders, and makes fun of Oscar-bait and George W. Bush with Jimmy Kimmel:

Tyson’s life story—the grit, the career renaissance—is no doubt compelling. But there is a hugely significant part of his “truth” that is very much disputed. On stage, Tyson ever so briefly addresses his 1992 rape conviction. Tyson served three years in prison for the rape of 18-year-old Desiree Washington, a contestant in the Miss Black America pageant. Medical examination following the incident found Washington’s physical state to be consistent with rape. High-profile lawyer Alan Dershowitz tried and failed to get him off on an appeal, and Tyson maintained that the encounter was consensual and that Washington had a history of crying rape. “I did not rape [her],” Tyson says to the applauding New York audience in Undisputed Truth. (What makes this more awkward is that, in the same performance, Tyson jokes about not knowing whether to beat or sexually attack young pretty-boy Brad Pitt, who he once caught supposedly having an affair with ex-wife Robin Givens.)

“How do you rape someone when they come to your hotel room at two in the morning?” Tyson has written, in what has got to be one of the all-time worst rebuttals to serious accusations of brutal rape.

Tyson’s repeated denials seem to have worked, at least in the eyes of his famous friends, his supporters, and his many fans. Even before his revival in recent years, he was visited in prison by Whitney Houston, John Kennedy, Jr., Larry King, Al Sharpton, and Tupac Shakur, among others.
Nowadays, he’s part of a popular culture that appears to have absolved him or simply forgotten what landed him in prison. In an episode of NBC’s Law & Order: Special Victims Unit that aired in February, Tyson played a murderer on death row who is also a victim of rape. Evidently, the thought of having a convicted rapist portray a rape victim wasn’t enough for the network to derail this bit of stunt-casting. (NBC did, however, change the episode’s air date to ensure that it didn’t premiere on the eve of One Billion Rising, a worldwide protest against rape and violence against women.)

The fact that a society quickly forgives celebrities for crimes and bad behavior shouldn’t come as news to anyone. Depressingly enough, the tendency to disregard sometimes extends to rape and sexual assault. Acclaimed director Roman Polanski—who raped a 13-year-old—can still freely win an Academy Award, work with Kate Winslet, get defended by Martin Scorsese, and comically torture Jackie Chan and Chris Tucker on-screen. The entertainment industry and too many of its patrons maintain an exceedingly high threshold for indefensibility. And in the case of Undisputed Truth, a convicted rapist owns the night as a beloved icon, a good storyteller, and an apparently gentle giant.

Horrible crimes don’t automatically disqualify an artist or performer’s contribution. But rape isn’t something an unrepentant soul should ever get to live down.