It’s well known that people of color are vastly overrepresented in US prisons. African Americans and Latinos constitute 30 percent of the US population and 60 percent of its prisoners. But a new study by University of California-Berkeley researcher Christopher Petrella addresses a fact of equal concern. Once sentenced, people of color are more likely than their white counterparts to serve time in private prisons, which have higher levels of violence and recidivism (PDF) and provide less sufficient health care and educational programming than equivalent public facilities.

The study compares the percentage of inmates identifying as black or Hispanic in public prisons and private prisons in nine states. It finds that there are higher rates of people of color in private facilities than public facilities in all nine states studied, ranging from 3 percent in Arizona and Georgia to 13 percent in California and Oklahoma. According to Petrella, this disparity casts doubt on cost-efficiency claims made by the private prison industry and demonstrates how ostensibly “colorblind” policies can have a very real effect on people of color. 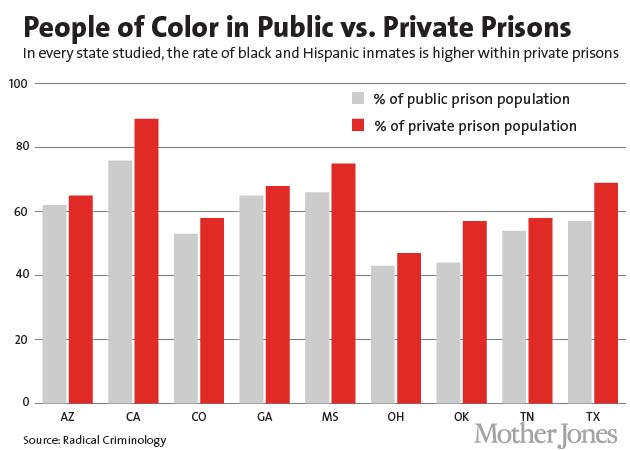 The study points out an important link between inmate age and race. Not only do private prisons house high rates of people of color, they also house low rates of individuals over the age of 50—a subset that is more likely to be white than the general prison population. According to the study, “the states in which the private versus public racial disparities are the most pronounced also happen to be the states in which the private versus public age disparities are most salient.” (California, Mississippi, and Tennessee did not report data on inmate age.) 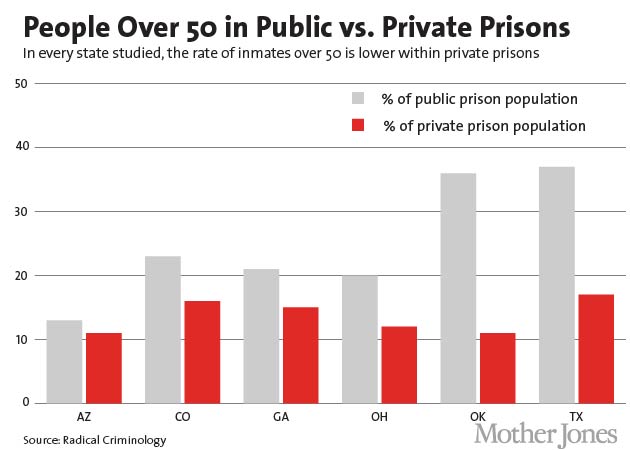 Private prisons have consistently lower rates of older inmates because they often contractually exempt themselves from housing medically expensive—which often means older—individuals (see excerpts from such exemptions in California, Oklahoma, and Vermont), which helps them keep costs low and profits high. This is just another example of the growing private prison industry’s prioritization of profit over rehabilitation, which activists say leads to inferior prison conditions and quotas requiring high levels of incarceration even as crime levels drop. The number of state and federal prisoners housed in private prisons grew by 37 percent from 2002 to 2009, reaching 8 percent of all inmates in 2010.

The high rate of incarceration among young people of color is partly due to the war on drugs, which introduced strict sentencing policies and mandatory minimums that have disproportionately affected non-white communities for the past 40 years. As a result, Bureau of Justice Statistics data shows that in 2009, only 33.2 percent of prisoners under 50 reported as white, as opposed to 44.2 percent of prisoners aged 50 and older.

So when private prisons avoid housing older inmates, they indirectly avoid housing white inmates as well. This may explain how private facilities end up with “a prisoner profile that is far younger and far ‘darker’… than in select counterpart public facilities.”

Private prisons claim to have more efficient practices, and thus lower operating costs, than public facilities. But the data suggest that private prisons don’t save money through efficiency, but by cherry-picking healthy inmates. According to a 2012 ACLU report, it costs $34,135 to house an “average” inmate and $68,270 to house an individual 50 or older. In Oklahoma, for example, the percentage of individuals over 50 in minimum and medium security public prisons is 3.3 times that of equivalent private facilities.

“Given the data, it’s difficult for private prisons to make the claim that they can incarcerate individuals more efficiently than their public counterparts,” Petrella tells Mother Jones. “We need to be comparing apples to apples. If we’re looking at different prisoner profiles, there is no basis to make the claim that private prisons are more efficient than publics.”

He compared private prisons to charter schools that accept only well-performing students and boast of their success relative to public schools.

David Shapiro, former staff attorney at the ACLU National Prison Project, agrees. “The study is an example of the many ways in which for-profit prisons create an illusion of fiscal responsibility even though the actual evidence of cost savings, when apples are compared to apples, is doubtful at best,” he says. “Privatization gimmicks are a distraction from the serious business of addressing our addiction to mass incarceration.”

But in addition to casting doubt on the efficacy of private prison companies, Petrella says his results “shed light on the ways in which ostensibly colorblind policies and attitudes can actually have very racially explicit outcomes. Racial discrimination cannot exist legally, yet still manifests itself.”

Alex Friedmann, managing editor of Prison Legal News, calls the study a “compelling case” for a link between age disparities and race disparities in public and private prison facilities. “The modern private prison industry has its origins in the convict lease system that developed during the Reconstruction Era following the Civil War, as a means of incarcerating freed slaves and leasing them to private companies,” he says. “Sadly, Mr. Petrella’s research indicates that the exploitation of minority prisoners continues, with convict chain gangs being replaced by privately-operated prisons and jails.”

*The study draws on data from nine states—Arizona, California, Colorado, Georgia, Mississippi, Ohio, Oklahoma, Tennessee, and Texas—selected because they house at least 3,000 individuals in private minimum and medium security facilities.