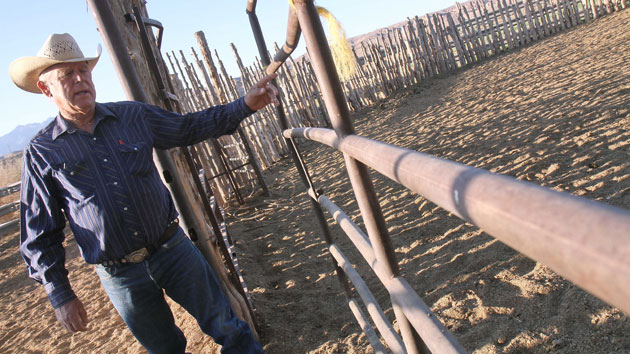 You might have trouble keeping track of all the racists in the news cycle these past few days. But even though deadbeat rancher Cliven Bundy’s 15 minutes seem to have faded—especially with his conservative media pals no longer championing him following his remarks denigrating “the Negro”—a public statement he issued on Friday that drew little press attention is notable. Here is a classic example of a racist who’s been revealed (by his own words) trying to claim that he’s not a racist and—what’s more!—he’s really just like a civil rights hero. We’ve seen this before, with affirmative-action foes insisting they are more akin to Martin Luther King Jr.—who asked people to judge a person by the content of their character rather than the color of his or her skin—than are advocates of affirmative action. Adopting this black-is-white defense, Bundy went with Rosa Parks, not MLK Jr., and issued a press statement with this absurd argument:

I am standing up against [the federal government’s] bad and unconstitutional laws, just like Rosa Parks did when she refused to sit in the back of the bus. She started a revolution in America, the civil rights movement, which freed the black people from much of the oppression they were suffering. I’m saying Martin Luther King’s dream was not that Rosa could take her rightful seat in the front of the bus, but his dream was that she could take any seat on the bus and I would be honored to sit beside her. I am doing the same thing Rosa Parks did—I am standing up against bad laws which dehumanize us and destroy our freedom.

This probably ain’t worth unpacking. But Bundy is likening having to pay the government a below-market-rate grazing fee for feeding his cows on federal land to segregation. And in the full statement, he goes further, comparing what he considers to be modern-day federal overreach to…yes, slavery. Looking to repair his reputation, Bundy—or whoever wrote this statement—embraced the conservative trope that the current taxing, spending, and regulatory policies of the federal government are equivalent to slavery. Remember when Sarah Palin likened the federal debt to slavery? Bundy takes it to the next level:

We are trading one form of slavery for another.

What I am saying is that all we Americans are trading one form of slavery for another. All of us are in some measure slaves of the federal government. Through their oppressive tactics of telling the ranchers how many cows  they can have on their land, and making that  number too low to support a ranch, the BLM has  driven every rancher in Clark County off the land, except me. The IRS keeps the people of America in fear, and makes us all work about a third or a half of the year before we have earned enough to pay their taxes. This is nothing but slavery from January through May. The NSA spies on us and collects our private phone calls and emails. And  the government dole which many people in America are on, and have been for much of their lives, is dehumanizing and degrading. It takes away incentive to work and self respect. Eventually a person on the dole becomes a ward of the government, because his only source of income is a dole from the government. Once the government has you in that position, you are its slave.

Bundy is extending his original case. He goes beyond his initial argument that Americans who receive federal assistance (meaning African Americans) are no better off than the slaves of old. He asserts that all of us have been enslaved by the federal government.

Bundy notes, “I am trying to keep Martin Luther King Jr.’s dream alive.” And he ends the statement with contradictory references to Concord and Lexington and a call for “peaceful revolution to regain our freedom.” The folks who were aiming assault weapons at federal officers during the standoff two weeks ago near Bundy’s ranch didn’t look that peaceful. And Bundy has repeatedly hinted that he’s willing to use violence against the feds.

Bundy’s statement shows that this episode is really not about a grazing-fee dispute. He and his comrades view it in a larger and extreme context, and it is Bundy who has racialized the episode—and continues to do so by equating himself to Parks and King and insisting that he knows best about the plight of today’s low-income African Americans. As of now, Bundy has lost his right-wing media darling status, and perhaps the feds will figure out a way to deal with him without another high-profile showdown in the desert. If so, this may be the last statement from Bundy that anyone—outside of the black helicopter, anti-government militia set—will have to pay attention to.