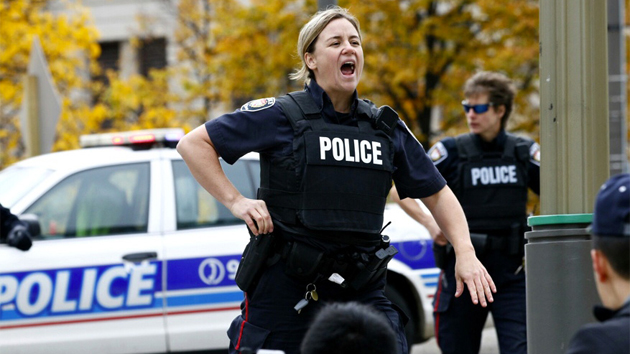 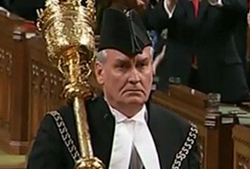 Anchored by the unflappable Peter Mansbridge, news of the shootings in Ottawa unfolded live on the CBC much like they do here in the United States: lots of sketchy details, conflicting reports, unreliable witnesses, and a thick fog of confusion. All of that was familiar. What was less familiar was how Mansbridge and his team managed that confusion, conveying a concise and fact-based version of fast-moving events to viewers across Canada and the world.

This live bit of level-headed reporting by Mansbridge, from around 11:10 a.m. Wednesday, should be given to journalism students around the country. It basically contains everything you need to know about why CBC did its audience proud:

MANSBRIDGE: And so, the situation is, as we say, tense and unclear. And it’s on days like this—we keep reminding you of this and it’s important—it’s on days like this, where a story takes a number of different pathways, a number of changes occur, and often rumors start in a situation like this. We try to keep them out of our coverage, but when they come, sometimes from official sources, like members of Parliament, you tend to give them some credence. But you carefully weigh it with what we’re also witnessing. It’s clear that the situation is not over. It is clear the police are in an intense standby situation and continue to be on the lookout, and until somebody blows the all-clear on this we will continue to stay on top of it and watch as the events unfold.

Watch below, courtesy of the CBC:

The broadcast was deliberative and deferential to the facts even when they were sparse. Exacting and painstaking, but never slow or boring, Mansbridge weighed the credibility of every detail, constantly framing and reframing what we knew and, most crucially, how we knew it. He literally spoke the news as it happened, using his experience not to opine nor fill the gaps in his knowledge, but to provide the necessary support for his team’s reporting.

Getting things wrong during fast-moving live coverage is, of course, common. Coverage of the Washington Navy Yard shooting last year got the details wrong early and often: It misstated the perpetrator’s name, age, and how many guns he had. Following the Boston Marathon bombing in April 2013, there was false coverage about the identity of the bombers, and anonymous sources leading journalists to nonexistent bombs and arrests. On the Media‘s handy “breaking news consumer’s handbook” is a great roundup of the reporting errors that get repeated every time there is a mass shooting.

No newscast, especially live news, is immune to mistakes, and during the initial haze of leads and counterleads, it’s easy to point fingers. But for the six-some hours of CBC broadcasting I watched off-and-on (mostly on) today, I never once felt lost in the wall-to-wall speculation that has characterized so many recent breaking-news broadcasts in the United States.

CBC, by the way, has not gone to break in over two hours. Peter Mansbridge has barely exhaled. Grand work by our public broadcaster.

.@CBCNews anchor @petermansbridge has been brilliant today, and US news could learn a lot: http://t.co/PvnyhNVzLs pic.twitter.com/gKaO6lo6n5