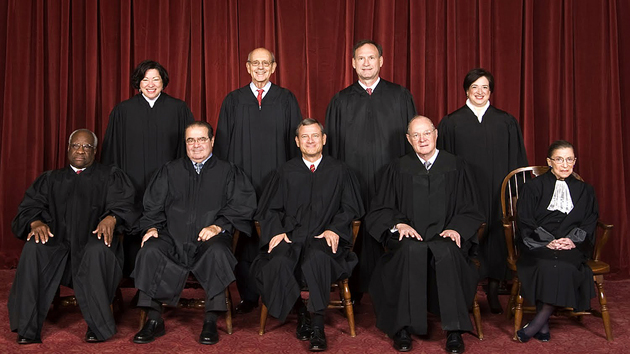 Justice Ruth Bader Ginsburg’s fans might refer to her as The Notorious RBG, but when it comes to understanding rap culture, the Supreme Court has some catching up to do. That was clear on Monday, when the justices heard arguments in Elonis v. United States, a case about whether gory, rap-style rhymes posted on Facebook by a Pennsylvania man constituted a real threat to his estranged wife.

Lawyers for Anthony Elonis asserted that his posts should be read as creative self-expression. (Some sample lyrics: “There’s one way to love you but a thousand ways to kill you. I’m not going to rest until your body is a mess, soaked in blood and dying from all the little cuts.”) Justice Samuel Alito didn’t seem convinced that these lines weren’t menacing. “This sounds like a road map for threatening a spouse and getting away with it,” he said. “So you put it in a rhyme…and you say, ‘I’m an aspiring rap artist,’ and so then you are free from prosecution.” Those comments are consistent with how judges and jurors tend to think about rap lyrics—they’re likely to see them as autobiographical and literally true, even though many rappers assume fictional personas.

The Elonis case isn’t the first time the Supreme Court has grappled with what constitutes legitimate artistic expression. From declaring that movies can be broadly censored because they could be “used for evil” to deciding that G-strings don’t limit nude dancers’ freedom of expression, the past results have been decidedly mixed. Here’s are the justices’ most offbeat efforts to play art critic:

The facts: An Ohio law required anyone who wanted to show a film to get permission from a board of censors, who charged for approval. Mutual Film Corporation, a motion picture company best known for producing Charlie Chaplin comedies, didn’t want to pay. It argued that its movies were protected by the First Amendment because of their power to enlighten and entertain.

It took until 1952 for the court to decide that film had proved itself “a significant medium for the communication of ideas.”

The outcome: The justices unanimously sided with the state on the grounds that movies were a business, not an art form—and that they could corrupt the hearts and minds of innocent children. “They, indeed, may be mediums of thought, but so are many things,” wrote Justice Joseph McKenna. “They may be used for evil, and against that possibility the statute was enacted. Their power[s] of amusement…make them the more insidious.” It took until 1952 for the court to decide that film had proved itself “a significant medium for the communication of ideas.”

The facts: Customs agents at the Los Angeles airport stopped Milton Luros on his way home from Europe and confiscated 37 photos of couples having sex, based on a 1930 law banning the importation of obscene material. Luros claimed that the photos, which he’d planned to use to illustrate a copy of the Kama Sutra, shouldn’t have been confiscated because they were for private use.

The outcome: The court concluded that Luros’ right to privately possess obscene material didn’t extend to the airport. “A port of entry is not a traveler’s home,” Justice Byron White wrote. But Justice Hugo Black, a First Amendment absolutist, penned a scathing dissent. “I can imagine no more distasteful, useless, and time-consuming task for the members of this Court than perusing this material to determine whether it has ‘redeeming social value,'” he seethed.

(What’s with the weird name: Cases in which a federal court seizes property are traditionally named after the item seized, not the item’s owner—hence the epic-sounding 2011 case U.S. v. One White Crystal-Covered ‘Bad Tour’ Glove and other Michael Jackson Memorabilia.)

The facts: Two exotic dance clubs in South Bend, Indiana, wanted to add completely naked dancers to their lineup. State law required that the dancers wear at least pasties and a G-string. The clubs sued, arguing that the law infringed on the dancers’ freedom of expression.

Medal of Honor and Resident Evil 4 were delivered to the court so justices could see what playing a video game was like.

The outcome: No redress for the would-be strippers. The fact that the nakedness would have been consensual didn’t matter to Justice Antonin Scalia, who wrote, “The purpose of Indiana’s nudity law would be violated, I think, if 60,000 fully consenting adults crowded into the Hoosierdome to display their genitals to one another, even if there were not an offended innocent in the crowd.”

The facts: After a scandal over artists receiving federal funding—including Andres Serrano, whose 1987 photo Piss Christ depicted a crucifix submerged in a jar of urine—Congress added “taking into consideration general standards of decency” to the NEA’s grant requirements. Performance artist Karen Finley, whose work involved covering her naked body with chocolate, sued the government after her grant application was denied. She argued that the new grant requirements suppressed unorthodox ideas.

The facts: EMA, a trade association for the home entertainment industry, challenged California’s ban on the sale of violent video games to minors. Before the justices heard the case, they had copies of Medal of Honor and Resident Evil 4 delivered to the court so they could figure out what playing a video game was like.

The outcome: The gaming experience must have won the justices over. They ruled that video games deserved First Amendment protection, overturning California’s law. “Like the protected books, plays and movies that preceded them, video games communicate ideas—and even social messages—through many familiar literary devices… and through features distinctive to the medium,” Scalia wrote in his pro-gamer majority opinion.