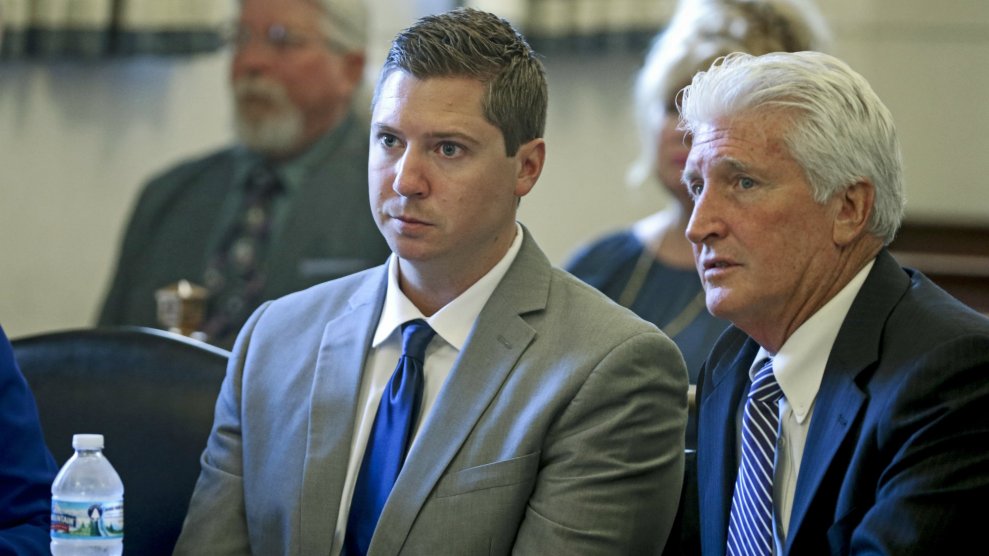 A judge declared a mistrial Friday after an Ohio jury failed to reach a unanimous verdict in the trial of a police officer who shot and killed a man during a July 2015 traffic stop. University of Cincinnati officer Ray Tensing, who is white, had been charged with murder in the death of 43-year-old Sam DuBose, who was black. The trial was the second for Tensing for the same incident—his first trial also resulted in a deadlocked jury and mistrial last November.

DuBose’s shooting made national headlines in 2015 after video of the incident recorded by Tensing’s body camera showed the officer shooting DuBose point-blank in the head. Tensing, who was patrolling off campus, had pulled over DuBose because he was driving without a front license plate. After an exchange about DuBose’s license and registration, the video appears to show DuBose start his car. Tensing testified that he shot DuBose after DuBose attempted to drive off. Tensing said that he thought he was going to be dragged underneath the car because his arm was pinned in DuBose’s passenger-side car window. But a forensic video expert testified for the prosecution that the video showed that Tensing’s arm was not pinned and that Tensing pulled his gun and aimed it at DuBose before the car began moving forward. The prosecution and defense made largely the same arguments and called many of the same witnesses in both trials.

DuBose’s shooting followed a traffic encounter between a police officer and 28-year-old Sandra Bland in Waller County, Texas, which had taken place roughly a week earlier. Video of that incident also went viral—and protests followed after it was reported that Bland had been found dead in her jail cell several days later; her death was ruled a suicide.

The Tensing verdict also comes amid a string of police-related news over the past week. Last Friday, a jury found a Minnesota police officer, Jeronimo Yanez, not guilty of second-degree manslaughter in the shooting death of Philando Castile during a traffic stop last July. On Wednesday, a jury in Milwaukee found another officer, Dominique Heaggan-Brown, not guilty of reckless homicide and other charges in the shooting death of Sylville Smith last August.

In a statement Friday, DuBose’s mother, Audrey DuBose, said that her family was “outraged that a second jury has now failed to convict Ray Tensing” and called for peaceful protests and another retrial. She also said that the family stands in solidarity with the families of Castile, Smith, and others who were killed by police.

JUST IN: Statement from family of #SamDubose as a second mistrial declared in trial against #RayTensing, officer who killed him @WCPO pic.twitter.com/xDHTTYds1d