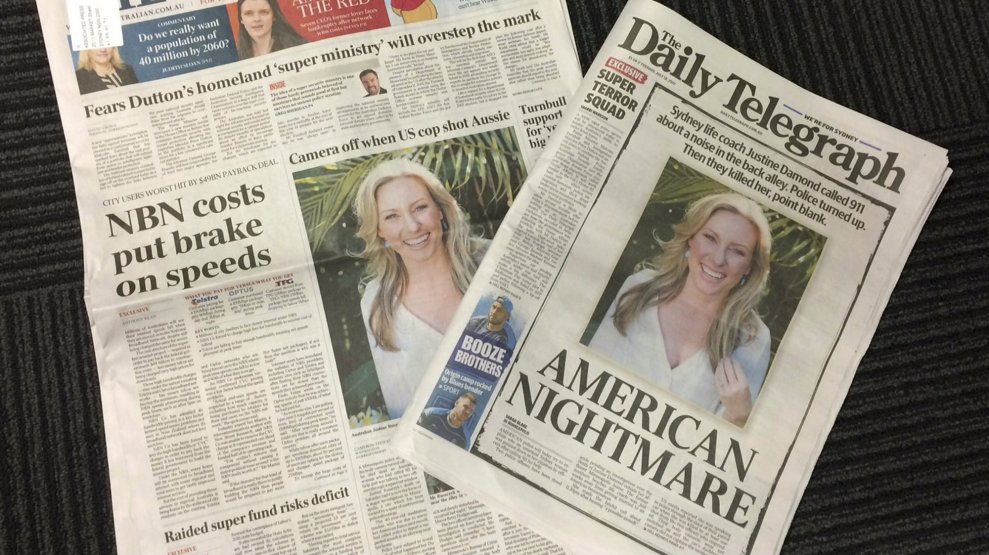 The front page of Australian newspapers covering the police shooting of an Australian national in Minneapolis.Kristen Gelineau

The shooting of an Australian woman by an American police officer this past weekend in Minneapolis has sparked widespread outrage from Australian nationals and in the country’s media. Many of the country’s major papers are touting headlines today slamming the act of violence as an “American Nightmare“—seen by many Australians as part of an American culture intimately tied to gun violence.

Justine Damond, 40, was shot and killed by a police officer outside her home late Saturday night in what was at least the third Minneapolis-area police shooting—alongside that of Philando Castile and Jamar Clark—to make national headlines since 2015.

Damond had called police to report a possible assault in an alley near her home. When police arrived, she approached the driver’s side of the police car in her pajamas, according to the Minneapolis Star Tribune. At some point thereafter, an officer pulled his gun and shot Damond through his car window, killing her. Police officials have said no weapon was found at the scene and that neither of the two responding officers’ body cameras were turned on at the time of the shooting. As of writing, police have released no information about why the shooting occurred.

Damond moved to the United States from Sydney, Australia, in 2015 to live with her fiancé, Don Damond. (She took his last name ahead of their wedding, which was scheduled for August.) She was a certified veterinarian and yoga instructor and owned a meditation and life-coaching company. The officer who shot Damond has been identified by multiple media outlets as 31-year-old officer Mohamed Noor.

“Our lives were forever changed from having known her,” Damond’s fiancé said during a press conference on Monday. “It’s difficult to fathom how to go forward in my own life without her here.” In a Facebook post, according to multiple news reports, Sarah Darmody, who identified herself as a longtime friend of Damond’s and still lives in Australia, expressed disbelief at the number of gun-related deaths that occur in the United States. “There is no good reason and there are no other countries in the world where people would rather arm everyone than stop this happening,” Darmody wrote. “I’m so sad and so angry I can’t even breathe.”

Numerous headlines from Australian media outlets expressed the same sense of shock and anger. Here are some of the most provocative front pages about the shooting from Australian press today: