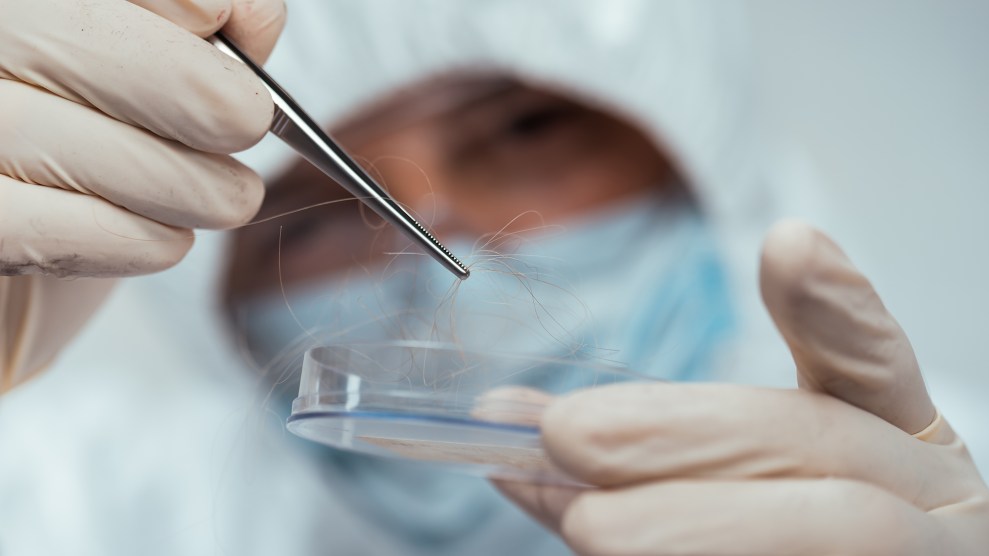 Forensic science is an embattled field. As DNA testing has overturned hundreds of convictions based on flawed forensic evidence, scientists and lawyers are increasingly skeptical that culprits can be accurately identified by matching fingerprints, hair samples, bite marks, bullets, and tread marks to suspects. In a landmark 2009 report, the National Academy of Sciences found that nuclear DNA testing was the only reliable forensic discipline; those based on expert analysis, as opposed to laboratory testing, weren’t really science at all. The report found that crime labs nationwide lacked uniform standards, practices, accreditation, and oversight. In 2015, the FBI found that its own microscopic hair analysts made errors at least 90 percent of the time in testimony and lab reports.

But Attorney General Jeff Sessions has resisted efforts to rein in forensic science and hold it to higher standards. And this week, he appointed a senior adviser on forensics who has a history of opposing reforms that would bring more accountability and scientific rigor to forensic crime labs and expert testimony.

The appointment of Ted Hunt, a Missouri prosecutor, came amid a broader announcement of Justice Department initiatives to improve forensic science. As the new senior forensic adviser, Hunt will oversee a “forensic science working group” to create guidelines for forensic examiners to follow in court testimony.

The announcement drew condemnation from the Innocence Project, which uses DNA evidence to exonerate the wrongfully convicted. “We are deeply disappointed…that these initiatives reflect an intent to move away from a public, transparent, and science-centered process for improving standards of testimony in forensic science, instead returning to an insular process conducted solely within the DOJ,” the group said in a statement on Monday. “The initiatives announced today will run counter to the recommendations of the National Academy of Sciences, the President’s Council on Science and Technology, the National Commission on Forensic Science, and a growing chorus of researchers, statisticians, forensic scientists, criminal justice stakeholders, and policymakers.”

Announcing the new initiatives, Deputy Attorney General Rod Rosenstein acknowledged that the Justice Department’s support for forensic methods has come under criticism. “The Department is fully committed to examining and strengthening forensic science despite efforts in the courtroom and elsewhere to reject reliable and admissible forensic evidence,” Rosenstein said in a statement Monday.

Sessions’ own views on forensic science are well known. “I don’t think we should suggest that those proven scientific principles that we’ve been using for decades are somehow uncertain,” he said during a 2009 Senate hearing on the National Academy of Sciences report. Sessions has advocated for more money for crime labs but has opposed efforts to place more regulations on labs that would bring accountability and transparency.

The department’s new efforts include scrapping a group created by the Obama administration, the National Commission on Forensic Science, which brought together prosecutors, defense attorneys, crime lab chiefs, and scientists to create recommendations for improving the field. In April, Sessions allowed the commission’s charter to expire. In its place, Hunt’s new working group will set standards for testimony, set up a monitoring program to ensure that government experts follow the guidelines, and help determine how to allot resources to forensic practitioners. The working group will consider input from defense attorneys, scientists, and forensic experts.

A scandal within the FBI, which trains forensic experts around the country, illustrated the problems with forensic testimony. A 2015 review of FBI experts’ microscopic hair testimony in 268 trials found that experts systematically overstated the certainty of their findings, testifying to the “near-certainty of ‘matches’ of crime-scene hairs to defendants, backing their claims by citing incomplete or misleading statistics drawn from their case work,” the Washington Post reported. But they were often wrong. Santae Tribble spent 28 years in prison for murder based on FBI expert testimony that hair from the crime scene matched Tribble’s “in all microscopic characteristics.” He was exonerated in 2012 based on DNA evidence. One of the hairs presented at trial turned out to be a dog hair.

Still, many prosecutors defend forensic practices. The chairman of the National District Attorneys Association, William Fitzpatrick, told the commission this spring that his organization believes “the comparative identification disciplines—such as tool marks, identification, ballistics, fingerprints, bite mark evidence, tire and footwear impressions—are reliable science.” To dismiss these disciplines, he stressed, would impede his ability to prosecute criminals. Sessions, a former federal prosecutor, has been hostile throughout his career to reforms that make it more difficult to win convictions. Hunt’s own record of opposing new standards for forensic testing and testimony suggests a similar perspective.

Hunt was a member of the national commission that his new group will replace. His job now is to create forensic standards, but he often voted against improving scientific methods, increasing oversight of labs, and requiring more scientific measures of accuracy of expert witnesses. (In response to a list of questions for Hunt, a Justice Department spokeswoman said he will officially begin his new role later this month and that “we are looking forward to continuing the Department’s work advancing forensic science.”)

In March 2016, the commission recommended that then-Attorney General Loretta Lynch direct forensic experts and attorneys working on behalf of the Justice Department to stop using the phrase “to a reasonable degree of scientific certainty.” The phrase is commonly used on witness stands and in lab reports and gives juries and judges a sense of factuality, but it is subjective and lacks any agreed-upon meaning across the sciences. Hunt was one of two commission members who opposed the recommendation, which Lynch adopted last September.

Lynch also adopted a recommendation by the commission requiring forensic testing labs that work with the department and its attorneys to publicize their internal procedures, from equipment maintenance to estimations of uncertainty, in order to foster transparency, trust, and best practices in the industry. Hunt was one of four commissioners who opposed it.

Last September, when the commission released a document supporting stricter accreditation standards for forensic labs, Hunt voted against it. And when the commission recommended that the National Institute of Standards and Technology conduct scientific evaluations of the “technical merit of test methods and practices used in forensic science disciplines,” he opposed that, too. At its final meeting, when members had already been informed that the group would be coming to an end, several commissioners pushed for a resolution encouraging experts to use more quantitative language to convey the accuracy of forensic testimony. The resolution narrowly failed, with Hunt among the nays.

Hunt’s charge, as explained by the department, is to create standards for experts so that “the Department’s forensic testimony is consistent with scientific principles and just outcomes.” Given his votes on the commission, critics of unchecked forensic testimony have doubts that his work will truly be scientific.