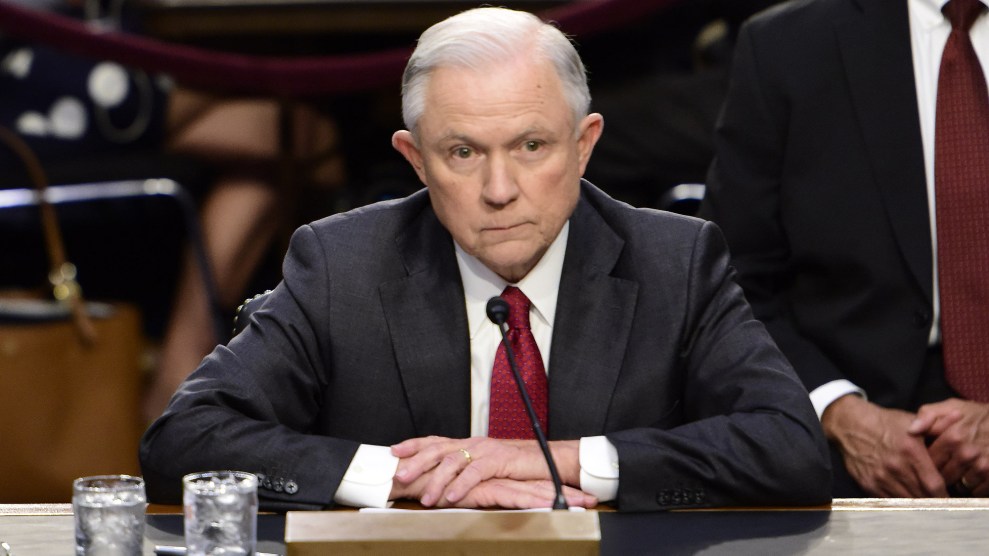 In a speech Monday to police chiefs from around the world, Attorney General Jeff Sessions designated the transnational gang MS-13 an official “priority” for the federal government’s “Organized Crime Drug Enforcement” task forces, which combine resources from an array of federal agencies, including the DEA, FBI, ATF, IRS, and ICE, among others.

These task forces “will go after MS-13 with a renewed vigor and a sharpened focus,” Sessions told a crowd at the annual conference of the International Association of Chiefs of Police in Philadelphia. “I am announcing that I have authorized them to use every lawful tool to investigate MS-13—not just our drug laws, but everything from RICO to our tax laws to our firearms laws.”

Sessions compared this approach to the one the feds used to lock up Al Capone, who was sentenced to prison in the early 20th century for tax evasion.

His speech was yet another iteration of the Trump administration’s ongoing attempts to tie MS-13—which Sessions called “perhaps the most brutal” of the gangs and cartels contributing to America’s opioid crisis—to the international drug trade and to lax immigration policies.

Sessions made similar comments in Boston last month, saying the Department of Justice would “hunt down” MS-13 members. Trump has frequently used MS-13 as a bogeyman to advocate for harsher immigration law enforcement, and his administration has argued that the influx of unaccompanied minors entering the United States in recent years has contributed to the rise of the gang—which has existed for decades and has its origins in 1980s Los Angeles.

The administration’s framing doesn’t help the people for whom MS-13 poses an actual threat—Latino communities.

But Héctor Silva Ávalos, a research fellow at the Center for Latin American and Latino Studies at American University who has spent more than a decade researching MS-13’s presence on the East Coast, told me the gang has little to do with international drug trafficking—and even less to do with the opioid crisis.

What’s more, he says, the administration’s persistent framing doesn’t help the people for whom MS-13 poses an actual threat, like Latino communities in the United States and Central America that are directly affected by its brutal tactics.

The administration’s false narrative goes like this, Ávalos says: MS-13 is the primary public enemy in the United States. It’s a Latin American product. And sanctuary city laws and other supposedly loose immigration policies are responsible for bringing that violence here.

Particularly troubling to him and other advocates is the DOJ’s partnership with ICE in targeting MS-13, which critics say will decrease cooperation between local police and Latino community members who might otherwise serve as witnesses in homicide cases, for example, that aim to prosecute gang leaders and members.

“If what you’re doing is giving resources to federal law enforcement agencies to enforce immigration policy,” Ávalos says, “that’s not the way to combat MS-13.” (As CNN reported in July, the Trump administration’s heightened immigration enforcement may actually contribute to an increase in MS-13’s activity.)

During his speech, Sessions also announced $100 million in grants to help local jurisdictions hire more police—a response, he said, to an increase in the national violent crime rate (a highly misleading statistic)—as well as a new oversight position for the DOJ’s controversial civil asset forfeiture program, which Sessions reinstated this past summer. His predecessor, Eric Holder, ended it two years ago because of constitutional concerns.