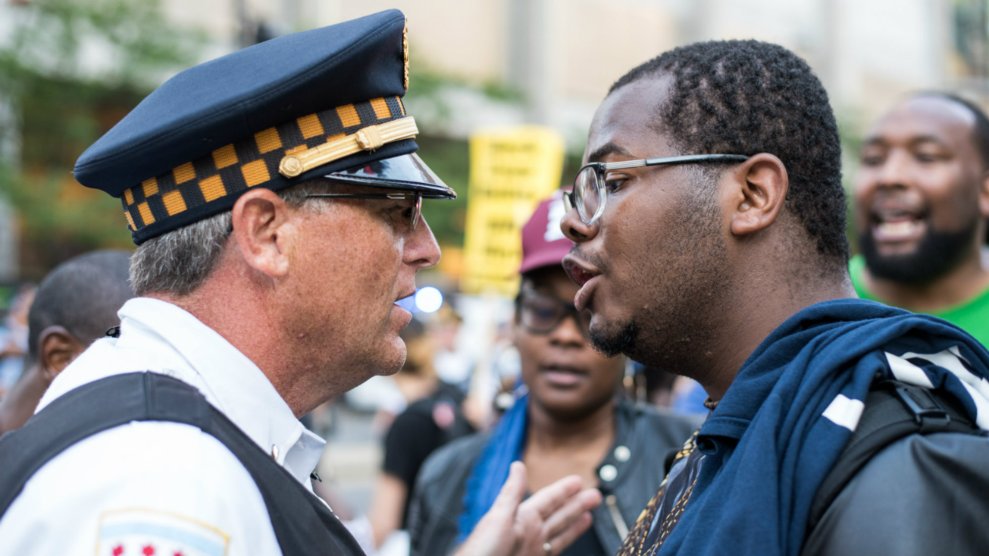 A man confronts a Chicago cop after officers forcibly removed protesters from the street during a 2016 march against police violence.Max Herman/NurPhoto

Mayor Rahm Emanuel’s proposal to build a state-of-the-art police training facility in an underserved neighborhood has become the latest flashpoint in the troubled relationship between Chicago residents and their embattled police department.

Emanuel has billed the $95 million academy project as necessary to carry out reforms recommended by the Department of Justice in a scathing January report, which among other things noted that tattered equipment at the Chicago Police Department’s 41-year-old training hub hampers the department’s ability to train its officers effectively.

The new facility would include attributes the current police training center lacks, including an outdoor shooting range, a mock apartment building and other structures for scenario-based training, and a driving course. (The grounds would be shared with the Chicago Fire Department.) Emanuel has argued that the thousands of officers who frequent the new facility will help drive economic investment in downtrodden West Garfield Park, the proposed site, and improve public safety there. (The neighborhood’s alderman supports the project.)

“This facility would not have prevented [officer] Jason Van Dyke from emptying an entire clip” into Laquan McDonald.

Earlier this month, the city council voted almost unanimously to buy land in West Garfield Park as the first step in a two-year, 30-acre construction project. But the plan has sparked fierce opposition from a coalition of more than 40 community groups, organized under the banner #NoCopAcademy. An expensive new training center, they say, is no fix for the department’s systemic problems, which contributed to the fatal police shooting of a teenager, Laquan McDonald, in 2014—which numerous media outlets billed as an “execution”—and to the city’s botched handling of the case. “This facility would not have prevented [Officer] Jason Van Dyke from emptying an entire clip into that 17-year-old,” says Page May, an organizer with the youth empowerment group Assata’s Daughters. “They don’t need new facilities. They need accountability.”

Since September, teenage members of Assata’s Daughters’ have canvassed six times in West Garfield Park, called hundreds of neighborhood residents to inform them about the project, and educated subway riders about the proposal in what they call “train takeovers.” This and other organizations have also staged protests and testified at city council hearings, arguing that the money would be far better spent on the city’s cash-strapped school system, mental health services, and community programs the activists say will help reduce violence in West Garfield Park and elsewhere—thereby reducing the need for police intervention.

Their opposition campaign has drawn the support of a homegrown superstar, Chance the Rapper, who also has been a staunch advocate for Chicago’s public schools. Chance showed up to testify against the academy at the same November hearing where the city council voted to buy the land. (Emanuel stepped out of the hearing before the rapper got his turn on the mic—he needed to call his mother on her birthday, he says.)

Chicago has neglected its police department’s training facilities for decades, according to the Justice Department report. The CPD’s primary facility has had few upgrades since it was built—the DOJ called it “exceptionally substandard” and “potentially dangerous” to train in. But the report also identified deeper problems with training: The academy was understaffed, it found, and instructors were sometimes using outdated teaching materials that didn’t comply with legal standards about when an officer is justified in using lethal force. The police department’s failure to weed out low-performing recruits also resulted in cops on the street who were “ill-equipped and perhaps incapable” of constitutional policing, the report notes. In addition, at the time, the department did not mandate any annual training for officers already on the streets.

Chicago police plan to beef up training. In reality “they need to revamp their whole curriculum,” says a former DOJ official.

“You can have the most up-to-date training facility in the world and still have officers that go out and consistently do the wrong thing if the content of the training isn’t appropriate,” says Christy Lopez, who oversaw police reform efforts at the Department of Justice under President Barack Obama. So while a new facility could help, she notes, “If they’re being strategic about it, they would put some more money into training content and be able to show a difference there before they start asking for money for brick and mortar.”

The chart below demonstrates how police training nationwide is geared more toward proficiency with firearms than teaching officers how to avoid using deadly force.

In September, responding to the DOJ report, Chicago police officials announced plans to beef up training efforts next year—annual supplemental training in de-escalation tactics and crisis intervention will now be required for all officers. The department has already started retraining its 12,000-plus officers in a new use-of-force policy. But in reality, says Lopez, the former DOJ official, “They need to revamp their whole curriculum.”

Lopez also doubts, given the shortcomings in the city’s training infrastructure, that the department will be able to balance heavier training requirements with its plan to hire about 1,000 additional officers next year. (The DOJ report raised the same concern.)

“This is an area of the city that has been historically marginalized and divested from.”

May, the local activist, would rather the city put its money toward improving local communities, not just policing them. “This is an area of the city that has been historically marginalized and divested from. And it’s appalling to see that, once again, the only resources being offered are more police. That’s not fixing the problem,” she says.

Early next year, the city council plans to start discussing how Chicago might pay for the new training center—the city has been in financial crisis for years, and even Emanuel concedes it doesn’t have the money to see the project through. May says her group and its #NoCopAcademy partners will keep spreading the word about the proposal and asking community members how they think that $95 million should be spent. “It’s time to start getting to the root cause of what’s causing the problems in West Garfield Park. And “when you do that,” she adds, a need for additional policing is not “what you hear.”