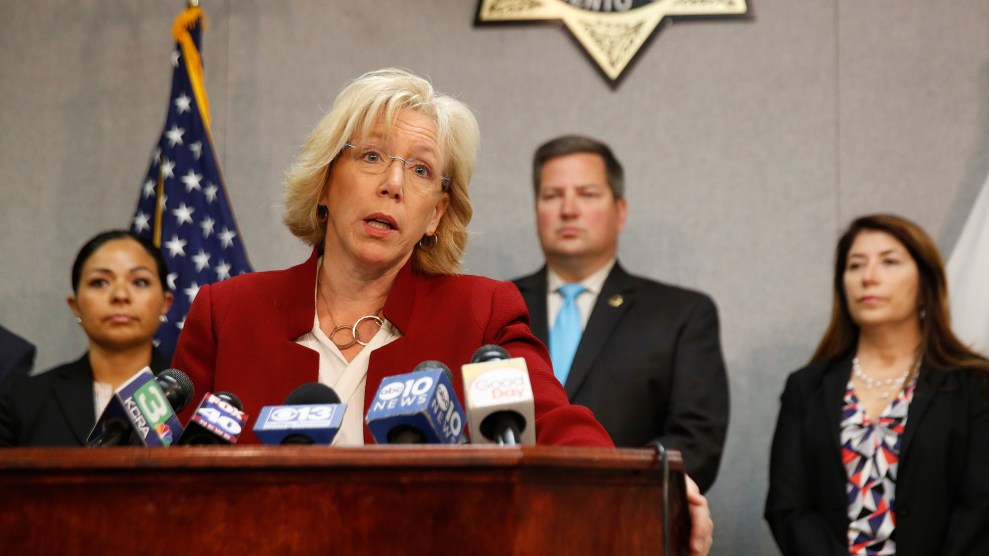 District attorney races are rarely competitive. Roughly 85 percent of incumbents run unopposed in campaigns that draw little fanfare. The result, some criminal justice experts say, is that tough-on-crime DAs have reigned for decades, driving a nearly 30-year surge in jail and prison populations with their aggressive charging and sentencing policies. And while this inertia persists, a recent push by progressive groups to replace old-school DAs with reform-minded challengers is reshaping local races all over America this year.

There are more than 2,400 district attorneys nationwide, but because most DA races happen during midterm elections, only about 100 were up for reelection last year. Only a few of them faced challenges from criminal justice reform candidates. (Exhibit A was Philadelphia’s Larry Krasner, who promised to work toward reducing the number of people behind bars and won handily.) This year, more than 1,000 incumbents are up for reelection and at least 40 are being challenged by reformers, according to Becky Bond, executive director of Real Justice PAC, a national organization run by former Bernie Sanders campaign staffers.

Some reform-minded DA candidates have received a boost from local organizing. Billionaire George Soros has also reportedly funneled at least $11 million into nearly 20 local district attorney races around the country since 2015. Progressive national groups such as the American Civil Liberties Union, Real Justice PAC, and Color of Change PAC have gotten involved, too.

These groups are scaling up their efforts this year, injecting money and manpower into dozens of local DA races. “It’s often prosecutors that are standing in the way of even the most modest, common sense reforms to the criminal justice system,” says Taylor Pendergrass, a senior campaign strategist at the ACLU’s Campaign for Smart Justice. The campaign, which aims to reverse mass incarceration, was heavily involved in last year’s Philadelphia race. Krasner, who took over as DA in January, has already made significant reforms, eliminating bail requests for many low-level offenses and directing his assistant DAs not to charge some smaller offenses at all.

“It’s often prosecutors that are standing in the way of even the most modest, common sense reforms.”

This year, Pendergrass says, the ACLU plans to get involved in 25 to 30 DA races in at least 14 states. These include the race in Oakland, California—where Pamela Price, a career civil rights attorney, is running on a platform to end cash bail and expand diversion programs for low-level offenders—and in the most populous county in Massachusetts, which includes Cambridge, where Donna Patalano, a defense attorney, is campaigning on promises that include getting rid of mandatory minimum sentences. Other DA candidates are promising to hold police accountable for missteps and provide the public with greater transparency. “Our focus on prosecutors now is borne out of a desire to tackle head-on the way prosecutors drive mass incarceration and racial disparities in the criminal justice system through their daily decision-making,” Pendergrass told me.

The Black Lives Matter movement—and recent research involving prosecutors’ embrace of tools such as mandatory minimums and three-strikes laws—have highlighted the role of district attorneys in driving mass incarceration. The primary aim of the ACLU, Pendergrass says, is to educate voters about a district attorney’s role in shaping decisions about bail, charging, and sentencing; point out how candidates differ on key issues; and encourage people to support those who support reforms. (As a non-partisan organization, the ACLU cannot endorse specific candidates.) “There’s almost no criminal justice reform we talk about that a DA in theory couldn’t do on their own,” says John Pfaff, a criminal law professor at Fordham University. So “any amount of attention on them has to be good. It’s not going to be a cure-all, but it’s an important and significant step forward.”

DAs are now “being defeated in a lot of races where there’s a focus on policy. And the policy that’s winning is: ‘Let’s get fairer.'”

The ACLU, Pendergrass says, is especially interested in races in cities that, like Philadelphia, are major contributors to their state’s prison population. In that race, the group’s Pennsylvania branch teamed up with about a dozen local groups to create and distribute mailers, and hired formerly incarcerated people to canvass in neighborhoods with historically low voter turnout—places where many residents have had close encounters with the criminal justice system. The group also organized a voter forum where candidates were pressed on their positions. The effort helped drive a nearly 70 percent increase in voter participation over the previous election. Krasner won in a landslide.

“I think it’s a significant shift in criminal justice politics,” says David Sklansky, an expert on prosecutorial powers at Stanford Law School. When district attorney races were competitive in the past, those races “focused on personality. To the extent that they focused on policy, they competed on who could issue the harshest punishment.” Now DAs are “being defeated in a lot of races where there’s a focus on policy. And the policy that’s winning is not ‘Let’s get tougher,’ but ‘Let’s get fairer.'”

Real Justice PAC, meanwhile, has sought to recruit candidates to challenge incumbent DAs, and it works directly with the candidates it endorses, says activist Shaun King, an organizer for the group. In Dallas, King says, RJP helped Democratic candidate Elizabeth Frizell shape talking points and craft promotional materials in advance of her March primary. RJP also worked with the Texas Organizing Project to assemble some 15,000 volunteers to canvass and send out mailers, and raised $100,000 to help the local group mobilize volunteers in the days before the balloting. Frizell won more votes on Election Day than her opponent did, King says, but she ultimately lost based on early voting for her opponent by mail.

RJP is now mounting similar efforts in cities such as Sacramento, California, which is still reeling from the fatal police shooting of Stephon Clark—and where incumbent DA Anne Schubert has been criticized for her failure to file charges in numerous police shooting cases on her watch. Last week, RJP donated $13,000 to candidate Noah Phillips, currently an assistant DA, who is challending Schubert with a reform platform that includes greater transparency about the DA’s handling of officer-involved shootings.

Bond, RJP’s director, says her group now relies on a tactic that was key to the unexpected success of the Sanders campaign: It identifies likely supporters of its favored DA candidate using publicly available information and then reaches out to those people. Hundreds of volunteers are calling and texting these potential supporters, asking them to donate, volunteer, and, of course, vote for the preferred candidate when the time comes. “People are hungry for change and want to get involved. They’re just not being asked to do something that’s actually going to solve the problem,” Bond says. “Part of what we do at Real Justice PAC is we’re telling people, ‘Here’s one way you can solve part of this really important problem’—and then we give them a role.”

In Texas in March, 7 of 13 incumbent DAs up for reelection were defeated.

The local push for decarceration is a far cry from the criminal justice policies endorsed by the Trump administration. Last May, Attorney General Jeff Sessions directed federal prosecutors to charge nearly all defendants with the “most serious readily provable” offense. Last month, on the direction of the president, Sessions instructed prosecutors to seek the death penalty against certain drug traffickers. The progressive focus on DA races appears to be paying off, though. In Texas last month, 7 of 13 incumbent DAs seeking reelection were defeated, the Texas Tribune reported—and often by reform-minded challengers.

Pendergrass hopes to capitalize on anti-Trump energy to boost those numbers further. In a national poll conducted for the ACLU last October, nearly 90 percent of respondents said prosecutors should actively work to end mass incarceration and to reduce racial bias in the criminal justice system. “The public wants issues of mass incarceration and racial injustice to be tackled. So I think that the public statements from Trump and Jeff Sessions supporting a return to the tough-on-crime [and] the war on drugs era is really concerning,” he says. “It can be very motivating to a public that has a really strong desire to see elected officials confront mass incarceration and racial injustice and take it head on.”