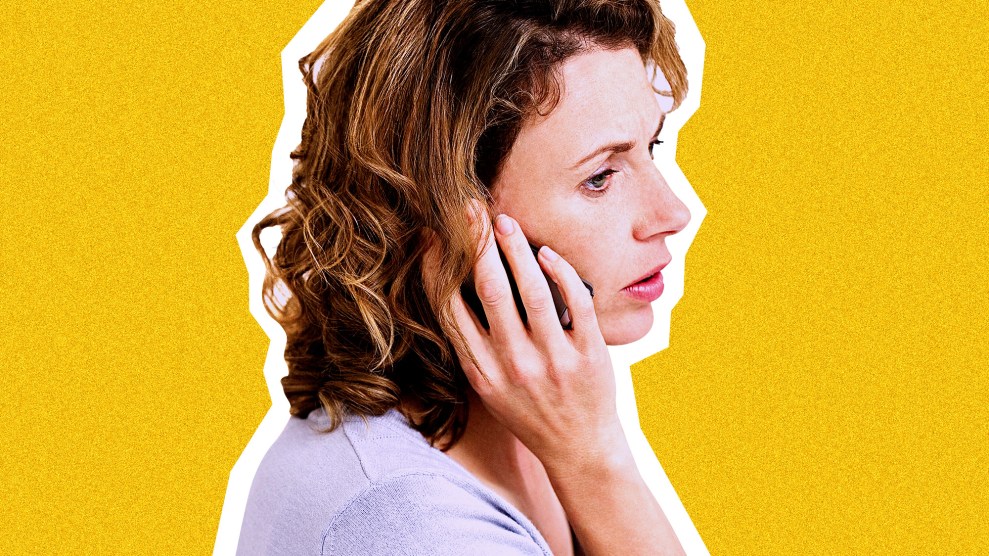 Fight disinformation. Get a daily recap of the facts that matter. Sign up for the free Mother Jones newsletter.
You may have heard about that unsettling incident last week—the one in which a white Yale graduate student called campus police on a black classmate who’d fallen asleep on the sofa in the common room of their student apartment building. Yale officers detained the black student, Lolade Siyonbola, for 15 minutes in order to, as one cop put it, “make sure you belong here.”
The caller clearly had issues—and to their credit, the Yale cops say they admonished her that this wasn’t a matter requiring police intervention. Yet it was just the latest in a series of recent encounters between police and African Americans that highlight just how low the bar is for white Americans to sic law enforcement on black people.
The police calls that have made headlines in recent weeks are a minority of those made to law enforcement—in fact, police chiefs often rationalize the heavy law enforcement presence in black and brown communities by noting that people in those communities make more calls to the police by far. Still, calls from white Americans like what we saw at Yale happen every day, and the attention these incidents have received from national media—including Mother Jones—marks a welcome shift in our dialogue around race and policing.
In the month since two law-abiding black men were arrested at a Philadelphia Starbucks, white people have called police on a group of black women who were golfing too slowly, on a group of black girls goofing around outside a formal dinner, and on a black real-estate investor who was inspecting a house he had under contract. White staff at a Nordstrom Rack called police on three black teens shopping for prom clothes because they wrongfully suspected them of stealing—and I quickly discovered this wasn’t a first for Nordstrom Rack.
These preventable police encounters are often triggered by ignorant calls from people who view black people through a lens of suspicion.
During the same time period, a former Obama staffer was reported to police as a possible burglar while moving things into his new apartment on Manhattan’s Upper West Side and black women picking up trash on the side of a Pennsylvania highway as community service for their sorority were questioned by police after someone called and claimed they were fighting. (They were not.) In Oakland, California, a white woman called police after confronting two black men barbecuing with charcoal in a lakeside area designated for gas grills. This list goes on.
These completely preventable police encounters are triggered by ignorant calls from people who view black people through a lens of suspicion, and they only add to the routine profiling of black folks by police, who already ticket and/or arrest us for minor violations such as jaywalking and pot smoking at disproportionate rates. In a 2016 Pew survey, nearly half of black respondents said they had been treated with suspicion because of their race within the past year, and 18 percent said they had been unfairly stopped by police.

Police agencies encourage citizens to act as their eyes and ears, to make a report whenever something doesn’t seem quite right—better safe than sorry. And that may sound reasonable. But when black skin is an ingredient for appearing “suspicious,” citizen vigilance becomes an invitation for trouble. In a 2017 Mother Jones essay titled, “Why the NRA Has Been a Disaster for Black People,” Harvard researcher Caroline Light described new research that demonstrates how race distorts American people’s perceptions:

Psychologists showed facial photos of young black men and young white men to 951 study participants. The black men were consistently judged to be bigger and stronger than the white men, even though all were roughly the same size. In addition, nonblack participants in the study judged the black men as “more capable of causing harm in a hypothetical altercation and, troublingly, [believed] that police would be more justified in using force to subdue them, even if the men were unarmed,” explained the study’s lead author, Montclair State University researcher John Paul Wilson. Darker-skinned men and those with more stereotypically black features “tended to be most likely to elicit biased size perceptions,” he added.

Remember that George Zimmerman, who was of Peruvian and German descent, called the cops on Trayvon Martin after racially profiling him as a potential burglar. Zimmerman then stalked, confronted, and killed the boy before police arrived. “If I had a son, he’d look like Trayvon,” former President Obama remarked on the case in 2012, noting that he, too, had experienced racial profiling before he became president.
If the past month’s headlines have shown us anything, it’s that white people often need to take a deep breath and ask themselves whether calling the police is really necessary in a given situation—because many times it is not. Getting law enforcement involved is an extreme response that tends to escalate conflicts. For black people, that call to law enforcement can have dire consequences—black men ages 15 to 34 were killed by police at four times the rate of our white counterparts in 2016.

That’s why it’s especially egregious when white people use 911 like a personal grievance hotline, summoning officers for something as minor as a black person arguing with restaurant staff—or because our behavior makes the caller uncomfortable, or because they think we might be up to no good. There’s an old adage that police aren’t just enforcers of the law, as Jason Johnson noted in The Root after the Starbucks arrests; they are also the enforcers of social norms and hierarchies. In America, the norm is white comfort and the hierarchy is racial. We often see this dynamic play out in fast-gentrifying cities where white people deploy the police to bully unfamiliar black people out of their neighborhoods and away from their establishments.
White Americans who want an end to police abuses against black people need to interrogate their own role.
These frivolous calls to police may be an even more intractable problem than police bias. They implicate not just a few hundred thousand cops but nearly 200 million white people. Accountability requires examining not just how police wield the powers assigned them by a badge, but how whites wield the racial privilege they enjoy from birth.
The solution to this problem isn’t clear. Maybe there isn’t one. Plenty of white folks view the police as their protectors, and in a nation literally founded on racism there will always be those who seek protection from blackness. What’s clear, though, is that it’s time for a broader discussion about how white civilians facilitate anti-black policing.
To that end, white liberals will have to alter their rhetoric: “Silence is violence” is a favorite saying among those who fashion themselves allies of the Black Lives Matter movement. In other words, by failing to speak out against police brutality, whites allow it to perpetuate—and that’s certainly true. But that language overlooks their shared responsibility in bringing police violence to bear. White Americans who want to see an end to police abuses against black people need to interrogate their own role, consider what they can do differently, and encourage their peers to do the same.
This might mean choosing not to call law enforcement even when a call seems warranted—something some black people already do for our own safety, ironically enough. I recently spoke with Tiny Grey-Garcia, an organizer with the Oakland nonprofit Poor Magazine, which runs workshops encouraging people of all backgrounds to think about how they can resolve conflicts without the police.
The man whose call sparked the police encounter that killed  Stephon Clark now regrets he ever picked up the phone.
The workshops include de-escalation techniques for mental health crises and other conflicts, but part of the process is to help participants to examine their own knee-jerk tendencies to call police first and ask questions later. “The reality is teaching them about themselves and getting them to confront that particular urge,” Grey-Garcia says. Many of Poor Magazine’s organizers are formerly homeless and/or have mental health conditions that previously resulted in citizen calls to the police. “We’re asking people, how have they equated safety and comfortability with a 911 call?”
Dave Reiling, the white man whose call sparked the police encounter that killed Stephon Clark, now regrets he ever picked up the phone. In March, Reiling called in to report that someone was breaking into cars on his block in south Sacramento. The responding officers encountered Clark, whom they identified as the suspect, in his grandparents’ backyard and then, apparently mistaking his cellphone for a gun, shot at him 20 times. The fatality made Reiling “never want to call 911 again,” he told a local paper. And his was, by most measures, a reasonable police call. Many are not.
Black people have enough to worry about in this country without police encounters initiated by people who invent reasons to call the cops on us. Their knack for doing so has become more and more offensive given the can of worms they must know they are opening. You want to talk about policing in America? Cool. While we’re at it, let’s talk about calling the police in America. Judging by recent headlines and the reactions to them, maybe that’s a conversation at least some white Americans are ready to have.
This article has been revised.