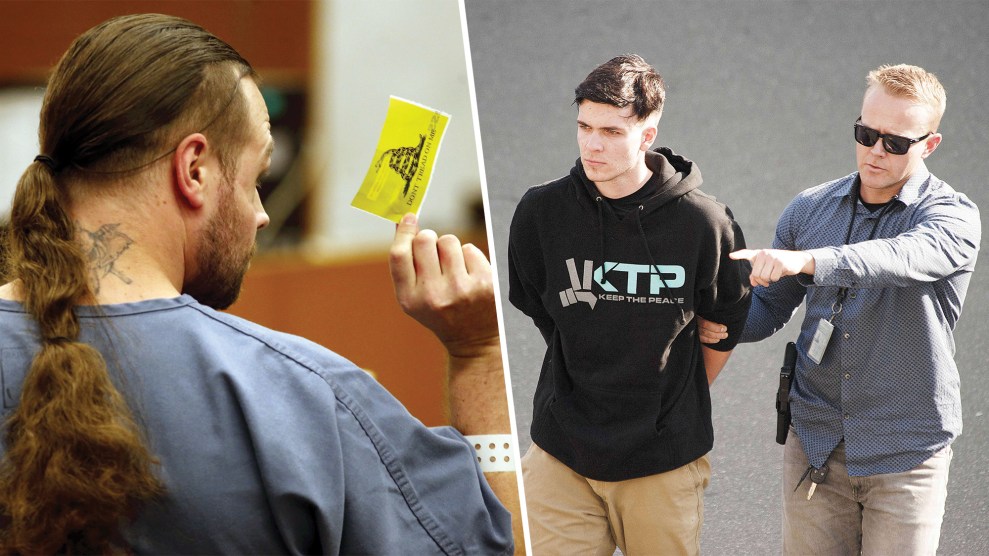 Four days after a homemade bomb blew through the window of a mosque in Bloomington, Minnesota, in August 2017, Sebastian Gorka, then a national security aide to President Donald Trump, commented about the attack. Though the culprits were still unknown, Gorka suggested that the bombing may have been a “fake hate crime” ginned up by leftists. He also scoffed at journalists who had raised questions about right-wing domestic terrorism: “It’s this constant, ‘Oh, it’s the white man. It’s the white supremacists. That’s the problem.’ No, it isn’t.”

Seven months later, federal prosecutors charged three suspects in the bombing. The accused, all white men who belonged to a militia group called the White Rabbit 3 Percent Illinois Patriot Freedom Fighters, allegedly hoped to “scare [Muslims] out of the country” by telling them, “You’re not welcome here—get the fuck out.” (The three were also charged for a failed bombing at an Illinois abortion provider.) About four months prior to the mosque attack, the alleged ringleader, a 47-year-old contractor named Michael Hari, had submitted a proposal to help build Trump’s border wall. Hari’s company pitched a “culturally significant” design that would “protect our way of life” and defend America’s “Anglo-Saxon heritage, Western culture, and English language.”

The United States has seen a spate of violent far-right extremism since the 2016 election. Trump’s response has been dismissive at best. Just six days after the Minnesota mosque bombing, white supremacists gathered for a torchlight march in Charlottesville, Virginia. Even after a Nazi sympathizer drove into a crowd of counterdemonstrators, killing one and injuring 20, Trump said the press had treated the marchers “absolutely unfairly” and famously declared some of them “very fine people.”

“It’s very dangerous because these people who have a history of violence now feel they have state sanction to commit violence.”

A month later, Congress passed a joint resolution “urging the President and the President’s Cabinet to use all available resources to address the threats” posed by “the growing prevalence” of “White nationalists, White supremacists, the Ku Klux Klan, neo-Nazis, and other hate groups.” Trump signed the bill quietly. That same day, he tweeted 11 times but said nothing about the joint resolution. Two months later, he retweeted graphic anti-Muslim videos posted by a far-right hate group—continuing his long-running pattern of amplifying content from extremists.

Domestic terror attacks in the United States have long been linked to a range of political motives, from the bombings of the Oklahoma City federal building and the Atlanta Olympics in the 1990s, to this decade’s Boston Marathon bombing and mass shootings in San Bernardino, California, and Charleston, South Carolina. Last year, politically motivated attacks included a shooting rampage targeting Republican members of Congress on a baseball field and a lethal truck attack by a radical Islamist along a New York City bike path. Yet numerous recent episodes show that the twin rise of online extremism and Trumpism has made for a combustible mix. According to research by Mother Jones, since October 2016 there have been at least two bomb plots and 15 violent attacks and killings around the country committed by people who expressed racist, xenophobic, anti-Semitic, or right-wing anti-government views—leaving 21 people dead and 27 others injured.

The 15 violent attacks—five of them since Charlottesville—have been investigated and prosecuted by local and federal authorities. When the suspect in the Charlottesville attack was charged with hate crimes in late June, Attorney General Jeff Sessions said in a statement, “Today’s indictment should send a clear message to every would-be criminal in America that we aggressively prosecute violent crimes of hate that threaten the core principles of our nation.” Yet, according to a senior federal law enforcement official who is knowledgeable about domestic attacks, the Trump administration has not focused on thwarting danger from far-right groups. “I’ve seen nothing to indicate it’s a priority,” the official told me recently.

“We have gotten no indication or communication from the administration to demonstrate that they have so much as lifted a finger,” says Rachel Cohen, a spokeswoman for Sen. Mark Warner (D-Va.), who introduced the joint resolution signed by Trump in September 2017.

A Trump administration official declined to answer questions about whether the White House has taken any specific steps since last September to focus on domestic far-right threats. A Justice Department official reiterated the agency’s commitment to investigating hate crimes and provided a list of prosecutions by the Civil Rights Division dating from January 2017.

Since the 2016 presidential election, white supremacists have targeted and committed violence against political protesters around the country—and in some cases they have done so with no legal consequences, as ProPublica’s Documenting Hate project has uncovered in detail.

“Clearly, the racist rhetoric throughout the presidential campaign and continuing into Trump’s administration has empowered white supremacist groups to be much more public,” says Michael German, who infiltrated neo-Nazi and militia groups as an FBI agent and is now a fellow at New York University’s Brennan Center for Justice. “It’s very dangerous because these people who have a history of violence now feel they have state sanction to commit violence.”

The plots and attacks researched by Mother Jones include alleged and convicted perpetrators who belonged to neo-Nazi groups, participated on far-right hate sites, and, in several cases, explicitly championed Trump’s politics. Here are some notable cases:

Patrick Stein, Curtis Allen, and Gavin Wright, middle-aged members of a “Crusaders” militia, prepared to bomb an apartment complex where many Somali immigrants lived. They had shared xenophobic and pro-Trump rhetoric online, and in the presence of an FBI informant they had threatened to kill Muslim “cockroaches” and “fucking raghead bitches.” (That was just “locker room talk,” their defense attorney argued, apparently in the parlance of the times.) According to prosecutors, the trio planned their attack for the day after the 2016 election because they didn’t want to hurt Trump’s chances of winning. They were convicted this April.

Jeremy J. Christian, 35, who had a criminal record and a history of racist and xenophobic outbursts, angrily accosted two teenage girls, one wearing a hijab, on a train. When other passengers intervened, Christian allegedly stabbed them, killing two and wounding another. “You call it terrorism—I call it patriotism!” he shouted at his arraignment.

Taylor M. Wilson, 26, was heavily armed and poised to turn violent after he entered a restricted area on an Amtrak train and applied the emergency brake, according to prosecutors. (He was thwarted by Amtrak personnel.) According to the federal criminal complaint, investigators found a cache of weapons at Wilson’s residence in Missouri and evidence that he was involved with white supremacist groups, including having traveled with one to Charlottesville for the infamous Unite the Right rally that August.

William Atchison fatally shot two students and then himself inside his former high school. The 21-year-old had frequented white supremacist and neo-Nazi websites such as the Daily Stormer. He had obsessed about school shootings and had posted a barrage of pro-Trump memes and violently racist rants in the run-up to the 2016 election.

Prosecutors allege that 20-year-old Samuel Woodward stabbed Blaze Bernstein, a 19-year-old Jewish college student who was openly gay, more than 20 times before burying his body in a park. According to an investigation by ProPublica, the grisly murder was celebrated by members of Atomwaffen Division, a neo-Nazi group Woodward belonged to. “We’re only going to inspire more ‘copycat crimes,’” one wrote in a private online forum. “All we have to do is spread our image and our propaganda.”