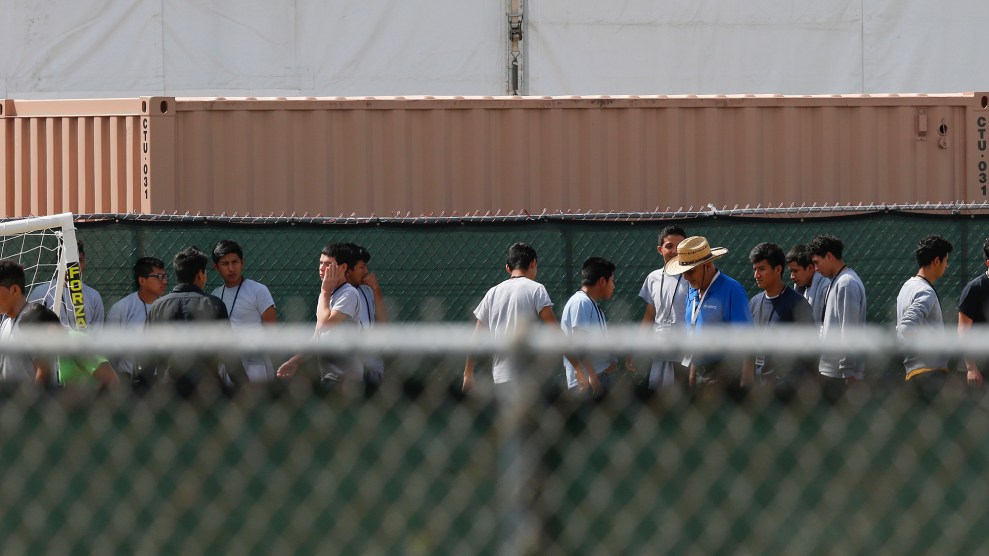 Migrant children at a temporary shelter in Florida in June.Brynn Anderson/AP

Shortly after reaching the United States and turning himself over to Border Patrol, Alonzo, a 16-year-old immigrant from El Salvador, was invited to speak with a psychologist at the Bristow, Virginia, shelter where he was detained. She asked him to talk about his life back home, and he told her how his brother had been involved in a gang and was wanted for murder. His parents had urged Alonzo to flee his home country because they worried he’d fall prey to the same gang.

Within hours of talking to the psychologist, Alonzo, whose real name has been withheld for privacy reasons, was transferred to the nearby Shenandoah Valley Juvenile Center. This made the teen’s situation even grimmer: Shenandoah is one of three juvenile detention centers in the United States where the Office of Refugee Resettlement (ORR) sends unaccompanied minors who are believed to require higher security. Last month, Virginia’s governor ordered an investigation of Shenandoah after children claimed guards had broken their bones and strapped them to chairs with bags over their heads. Immigrant kids detained there say they have been beaten while handcuffed and isolated for long periods in solitary confinement. “They treat us like criminals,” Alonzo explained in a recent court filing. He believes the psychologist mistakenly recommended his transfer because she thought he was in a gang. “[She] misunderstood me, and wrongly thought that I had killed someone,” he said.

Alonzo’s not the only one to suffer as a result of a misunderstanding. A federal lawsuit filed late last month in California argues that ORR is holding immigrant children in jail-like conditions at juvenile detention centers and other facilities, often based on claims that they are dangerous, without giving them a fair chance to refute the allegations against them. The lawsuit was filed by attorneys at the Center for Human Rights and Constitutional Law, the Immigration Law Clinic, and the National Center for Youth Law on behalf of five kids from Mexico, El Salvador, Guatemala, and Honduras. The attorneys are seeking class-action status. They argue that hundreds of immigrant children likely have similar cases—whether they fled to the country alone, were separated from their parents at the border, or came into federal custody after many years of living in the United States.

Kids report being awakened during the early hours of morning and flown in shackles across the country to juvenile halls without advanced notice or an explanation.

Kids report being awakened during the early hours of morning at shelters and flown in shackles across the country to juvenile halls without advanced notice or an explanation. Some have been sent to psychiatric facilities, where they are forcibly held down and injected with powerful psychotropic drugs without their consent, as Reveal and the Houston Chronicle have reported. At any given time, ORR detains nearly 100 kids in juvenile detention or psychiatric facilities and another 100 or so in what’s known as staff-secure facilities, which are less jail-like than juvenile hall but still involve heightened security.

Lucas R., a 12-year-old from Guatemala, is one of the plaintiffs named in the lawsuit. After arriving at the US-Mexico border in February, he was held in federal custody in Arizona. There, he became depressed with thoughts that he might never be released to his family, so he was transferred to the Shiloh psychiatric facility in Texas, where he was put on Zoloft against his will. Another child, 17-year-old Miguel Angel S., was also medicated without his consent and says he was physically abused by staff members at Shiloh, including one who allegedly ripped an earring out of his earlobe while putting him in a headlock.

According to the lawsuit, children can’t be released from the treatment center until medical personnel declare them mentally fit—but they’re being denied the administrative hearings necessary to make their case. It’s “the functional equivalent of indefinite civil commitment without due process of law,” their attorneys write. They argue the setup violates the Fifth Amendment as well as the Flores settlement, a 1997 federal court decision that limits the detention of immigrant kids and requires those who are kept in government custody to be held in the “least restrictive setting” possible. (Several of the California attorneys, including Carlos Holguín of the Center for Human Rights and Constitutional Law, have worked on the original Flores case.)

The Flores settlement does allow minors to be kept in juvenile hall in certain circumstances, including if they have committed a violent crime or have threatened violence. “Generally, we see a child in a shelter care facility who for whatever reason acts out—could be because of trauma,” says one of the attorneys, Holly Cooper, co-director of the Immigration Law Clinic at the University of California-Davis. After 30 days at one of these facilities, ORR is supposed to review the child’s file and consider whether he or she may be released or moved back to a low-security shelter. But Cooper says she has yet to find a single child who had a chance to participate in that review process, or whose parent or attorney had an opportunity to join the proceedings.

When a judge in California recently considered the cases of 29 immigrant kids held in juvenile halls, 90 percent were found not dangerous and were released.

If a child believes he has been transferred in error, he has a right under the Flores settlement to file an action in federal district court, but many kids say they are not given notice of this right and lack counsel to take advantage of it. “The vast majority of children who end up in secure custody through ORR have never been charged, let alone convicted, of crimes in the US or in their home country,” the attorneys write. According to an April court filing, when a judge in California recently considered the cases of 29 immigrant kids held in juvenile halls, 90 percent were found not dangerous and were released.

The lawsuit filed last month also alleges that children are detained longer than necessary because ORR makes it too difficult for parents and other relatives to take them back into their care. Family members hoping to become a child’s legal guardian must produce documents to prove they are safe and financially secure. They must also allow everyone in their household to be fingerprinted, and they often have to allow inspectors to visit them at home.

Parents have been told they are unfit for a range of reasons: One mom was denied because officials found gang graffiti two blocks from her house. Others were rejected because they lacked the funds to pay for medication their children were forced to take in federal custody. Some have too many young kids already living at home. Miguel Angel S., who was put in the headlock at Shiloh, could not be released to his father in San Jose, California, because a case worker required that his father prove the boy was enrolled in school, but the local school refused to enroll him unless he was physically present. According to the lawsuit, parents who are deemed unfit are not offered a fair chance to inspect or rebut the evidence against them.

The Department of Health and Human Services, which oversees ORR, declined to comment on the pending litigation. In a May court filing in a related lawsuit, ORR argued its procedures for transfers to secure facilities did not violate the Flores agreement. The agency said its requirements for vetting sponsors are sometimes drawn out in an attempt to ensure that children are not released to traffickers and will be taken care of properly in their new homes.

Meanwhile, kids like Lucas R., the 12-year-old at Shiloh, remain in detention. His sister in Los Angeles was deemed unfit to take him in because her roommate’s brother, who did not live at her house but was visiting during the home inspection, did not appear for fingerprinting. According to the lawsuit, the agency told the sister its decision was final and did not allow her any hearing or right to an administrative appeal.

So Lucas, now diagnosed with “major depressive disorder,” waits in the psychiatric facility in Texas. Among his “major stressors,” the facility notes, is the fact that he is “being kept from family and in ORR custody.” Still, he has been told that he won’t be released to his sister until medical personnel can declare him psychologically sound.