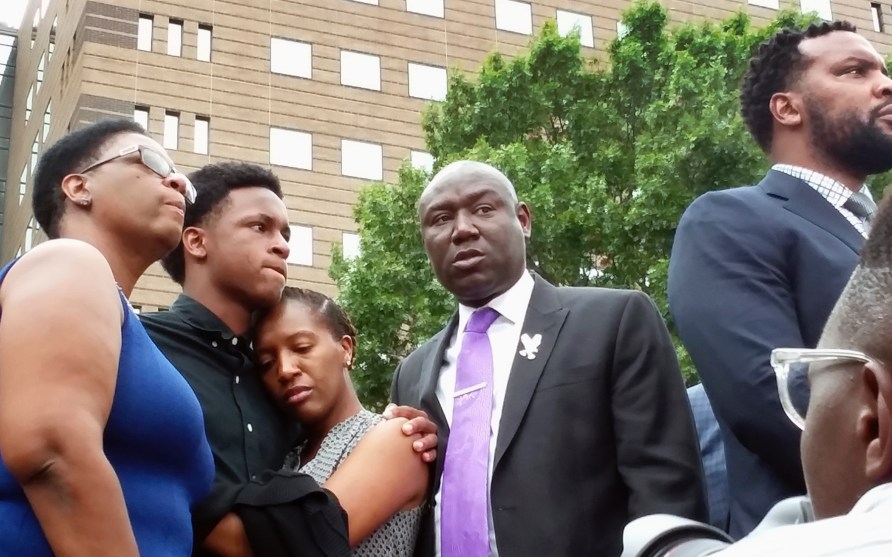 Attorneys for the family of Botham Shem Jean, along with his relatives, at a press conference September 10Ryan Tarinelli

Mourners will congregate at Dallas West Church of Christ in Texas on Thursday for the funeral of Botham Shem Jean, the 26-year-old African American man who was shot and killed in his own apartment last week by an off-duty police officer, even as questions abound about what exactly happened that evening.

Authorities say Amber Guyger, 30, shot Jean after she parked on the wrong floor of the complex they both lived in. Guyger encountered Jean, whom she thought was a burglar, when she mistakenly entered his apartment thinking it was her own. Attorneys for Jean’s family have raised a number of issues with the official account, however, including the fact that more than one witness has said they heard knocking and/or an exchange of words before shots were fired.

Jean was an accountant at PricewaterhouseCoopers. A naturalized US citizen, he moved to Arkansas from his birthplace of St. Lucia to attend a private Christian college. As an undergraduate, he sang in an a capella group and often led songs at campus events, according to the Washington Post. He came from a prominent family in his island nation—his mother is a former senior official in St. Lucia’s Ministry of Education, Innovation, Gender Relations and Sustainable Development, according to a report by a St. Lucian newspaper.

The shooting took place last Thursday, after which Guyger was placed on administrative leave by the Dallas Police Department. On Sunday, she was arrested on a charge of second-degree manslaughter and released on $300,000 bond. A grand jury will ultimately decide whether to indict her and on what charges, Dallas County District Attorney Faith Johnson has said. Guyger, a Dallas cop for five years, was involved in another shooting in 2017, this time while on duty, and was determined not to be at fault.

The authorities have yet to release audio of the 911 call Guyger placed after last week’s shooting. In the arrest affidavit, however, police assert that Guyger, still in uniform after a 15-hour shift, parked on the fourth floor of the complex rather than the third, where she lives. She headed toward Jean’s apartment, located directly above her own.

When Guyger arrived at Jean’s door, according to the affidavit, she stuck her key in the lock, but the door was slightly ajar and opened fully when she tried to unlock it—this “alerted Complainant Jean to Guyger’s presence.” The officer then noticed “a large silhouette across the room of her apartment.” Believing she’d caught a burglar in the act, the affidavit continues, Guyger drew her gun, “gave verbal commands that were ignored,” and then fired twice, striking Jean once in the torso. He died at the hospital.

This account, written by an officer with the Texas Rangers, the state agency investigating the shooting, conflicts with an earlier account from a search warrant written by another ranger. That document asserts that as Guyger was “attempting to enter” the apartment, Jean “confronted the officer at the door,” and a neighbor said “he heard an exchange of words” before shots were fired.

“We don’t actually know what happened. We still don’t have all the evidence.”

Attorneys for Jean’s family challenged the new affidavit in a press conference Monday. One of the attorneys, Lee Merritt, said one witness who was reading in her apartment at the time of the incident told him she heard “pounding at the door” followed by a female voice shouting “Let me in!” prior to the gunshots—both of which, if true, would suggest that Jean’s door was closed and he had opened it. The witness then heard a man say, “Oh my God! Why did you do that?”—Jean’s last words, the attorneys speculate. That same witness has since given a statement to the DA’s investigators, according to Merritt, and another tenant also said they heard pounding.

“We don’t actually know what happened. We still don’t have all the evidence,” Merritt said. However, “we know that the evidence that exists contradicts this version of events that seems to offer as little culpability for this officer as possible.”

Another attorney at the press conference criticized the decision not to arrest Guyger immediately after the shooting—as police likely would have with a civilian—and wait three days, which would have given Guyger time to get her story straight. “This is what we were afraid of,” the attorney said. “When a police officer is allowed to stay on the street for 72 hours and have access to an attorney, this is what we start to see happening—these type of statements.”

Merritt challenged other parts of the affidavit, which he called “demonstratively false,” in a CNN interview Tuesday, including its assertion that Botham’s door was already open. The front doors of the apartments in her complex close automatically, he said—Botham’s door could not have been open unless it had been physically propped open, and it hadn’t been.

A lawyer for the victim’s family thinks it’s unlikely the officer was intoxicated.

Jean and Guyger did not know each other, Merritt told me in a phone interview, rejecting an online rumor that a lovers’ quarrel may have precipitated the shooting. The results of a drug and alcohol test administered to Guyger after the shooting also won’t come back for a month, he said. There’s been plenty of speculation as well about whether the officer was intoxicated if, in fact, she missed all the warning signs she was on the wrong floor and in the wrong apartment. Merritt doesn’t think intoxication was a factor—none of the police who viewed body camera footage of the responding officers, which included Guyger, felt she appeared to be under the influence, he told me. Her words didn’t appear slurred on her 911 call, he added, and she submitted voluntarily to a blood test which, as a peace officer, she would have been within her rights to refuse under Texas law.

All of which makes Guyger’s narrative all the more puzzling. There were “indicators all throughout the hall” she was on the wrong floor, Merritt says, adding that Jean also had a bright red doormat in front of his door. “I went down to her floor, and not too far from her door is a woman who has a vase about five feet high. She walks down the hallway and doesn’t notice that large vase is not there?”

But if Guyger, in fact, recognized she was not at her apartment, then why would her key have been in the door when officers arrived on the scene, as those officers reported? “It’s possible she concocted this excuse after the fact and stuck her key in the door,” Merritt says.

Merritt wouldn’t share the other theories he’s exploring. He says officials he spoke with at the Texas Rangers told him Guyger had clocked out of work, which is walking distance from her apartment, around 9 p.m. She shot Jean just before 10 p.m.

“It’s easy for me to shoot down what she’s claiming and dissect the affidavit and point out all the lies and inconsistencies and things that just don’t work logically,” he says. “But I can’t replace it with the actual truth. Something did happen within that 50 minutes to cause her to kill this young man. I don’t know what it was.”