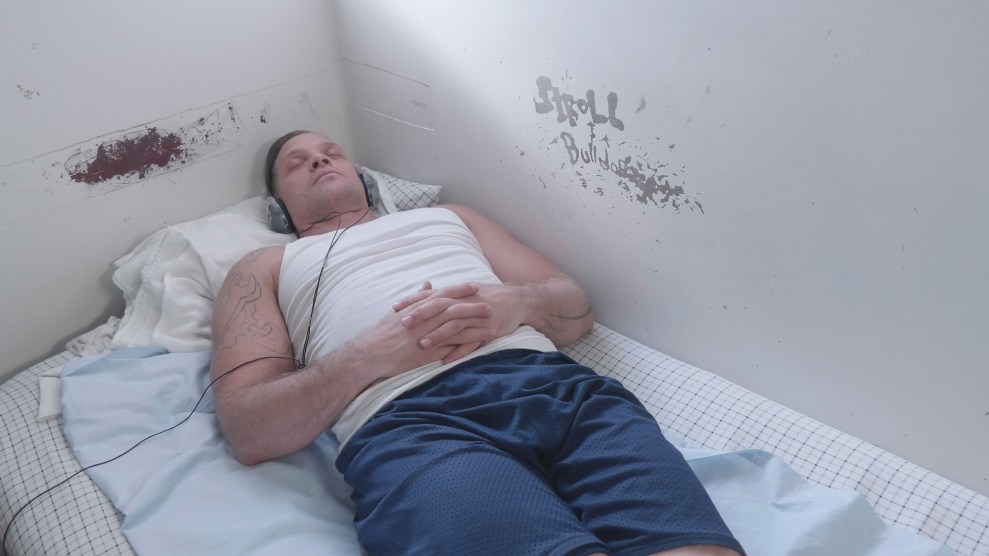 This story was originally published by The Marshall Project.

Last week, Nevada death row prisoner Scott Dozier called his family and friends and said they might not be hearing from him for a while. He had been placed, he said, in a form of solitary confinement so his mental health could be assessed, with just a few articles of clothing and an anti-suicide blanket.

Prison officials have not offered an explanation, but Dozier has speculated that they are punishing him for—or trying to get him to halt—his years-long effort to be executed. “I have never heard him sound so defeated,” said Edgar Barens, a filmmaker who has regularly corresponded with Dozier.

Dozier’s ongoing legal saga, which I wrote about in January, continues to illuminate the ambivalence and political turmoil surrounding the death penalty in the United States. Death row prisoners usually appeal their sentences, and many manage to hold off execution for decades. Many live in solitary confinement with few amenities, but Dozier was given access to an exercise yard, as well as a television, MP3 player and art supplies. Still, he did not feel that life in prison was a life worth living. Two years ago, he announced that he would give up his appeals and agree to be killed. His request forced Nevada, which had not executed anyone in a decade, to come up with a new lethal injection cocktail and defend it in a number of court battles.

As of now, the state is losing those battles, and it appears Dozier will not be executed anytime soon. In late September, Las Vegas district judge Elizabeth Gonzalez barred officials from using their store of lethal injection drugs, based on opposition from the pharmaceutical companies that produced them. Nevada Attorney General Adam Laxalt is asking the state supreme court to overrule Gonzalez, but if that fails, officials will need to acquire new drugs—no company has offered to sell them—or else develop a new execution method, such as the firing squad.

“I can’t fucking believe they can treat people like this. It feels like they’re fucking with me to get me to stop [pushing to be executed].”

After two previous stays of execution, Dozier was placed on suicide watch for several days. The prison agency said this was a temporary precaution until he could be given a psychological evaluation, but Dozier thought officials might be punishing him. “I can’t fucking believe they can treat people like this,” he told me by phone in July after the most recent stay. “It feels like they’re fucking with me to get me to stop [pushing to be executed].” He wrote letters to the head of the prison agency and a state senator, but to no avail.

This time, family and friends said Dozier had been in good spirits until he was put in these conditions, which he described to Barens as “limbo inside of limbo.” In an email sent on Oct. 3 to one of Dozier’s lawyers, obtained by The Marshall Project, Ely State Prison warden William Gittere wrote that Dozier’s placement was based on a “mental health provider’s orders.” “He is not on a suicide watch, but has been placed in an infirmary cell to be observed and assessed for the next few days to a week,” Gittere wrote. “I cannot comment on the source of information that led to the provider’s concern due to an ongoing investigation.”

Last Friday, Dozier’s family sent a letter to Nevada Department of Corrections director James Dzurenda. “At this point there is little to no information supporting the idea that Mr. Dozier is a risk to himself or others,” they wrote. “He has asked to speak with medical staff yet requests were left unanswered, denied, or met with apathy.”

In an email, corrections department spokesperson Brooke Santina cited patient privacy in declining to provide details about Dozier’s mental health treatment, but said prisoners are only placed in segregation when “we have a reason to believe that there is a threat to their safety or the safety of another.” Asked if Dozier was being punished, she responded, “With nearly 14,000 inmates in 18 facilities across the state, it’s imperative we follow the law and our policy to ensure each inmate is treated as any other inmate in his or her circumstances would be treated.”

“It’s more that I’m resigned … I’m not raging against the dying of the light.”

Dozier was sentenced to death in 2007 for killing and dismembering 22-year-old Jeremiah Miller, an associate in the methamphetamine trade. He was separately convicted in Arizona of killing 26-year-old Jasen Greene, and while in an Arizona jail, in 2005, he attempted suicide. He denies both murders, and began appealing his convictions, but in October 2016, he ended his appeals. Some have described his effort to be executed as akin to state-assisted suicide, but Dozier doesn’t see it that way. “It’s not that I think I deserve the sentence,” he told me. “It’s more that I’m resigned … I’m not raging against the dying of the light.”

His decision set off a chain reaction. Pharmaceutical companies, most of which have refused to sell drugs for use in lethal injection in recent years, declined to sell them to Nevada. The state announced a new cocktail featuring fentanyl, the opioid better known for causing overdoses across the country, and set an execution date in November 2017. When Dozier let his defense lawyers argue that death by the new drug combination might be painful, and therefore unconstitutional, a judge stayed his execution.

As the months passed, Dozier’s frustration—with the state, with his lawyers, with himself—only grew. “I see this as a war right now, a battle, and I feel like sometimes I’m winning, and sometimes I feel like I’m losing,” he told me by phone in February. He started wondering if state officials were dragging out the legal process, hoping he would change his mind and save them the hassle of killing him.

But he also maintained his caustic, nihilistic sense of humor. When President Trump said he wanted to give the death penalty to some drug dealers, Dozier said, “They can’t even execute me! Get your shit together, people.”

“We don’t know how long we have with him, when will be the last time we see him, hug him, talk with him, or say our final goodbyes.”

After state officials set a new execution date for last July, several drug companies accused them of purposefully obfuscating their intentions while buying their products. When a judge halted the execution, it was a benchmark moment: never before had a drug company stopped an execution in court.

Dozier was visiting with his family—for the last time, he thought—when an officer told them about the stay. “It is heartbreaking and stressful,” Dozier’s sister Bekki Patzer told me in an email. “I don’t know for certain, but I imagine it is similar to someone having a terminally ill family member. We don’t know how long we have with him, when will be the last time we see him, hug him, talk with him, or say our final goodbyes.”

His family has continued to write letters to the department about Dozier’s conditions but have not received a reply. Patzer told me she understands that the prison must take precautions, but does not understand why her brother has been deprived of his personal belongings, along with the ability to exercise in the yard, make calls and receive visitors. “His well-being is my primary concern,” she said, “and I don’t see how keeping him from those things can do anything but cause a deterioration in his mental and physical well-being.”