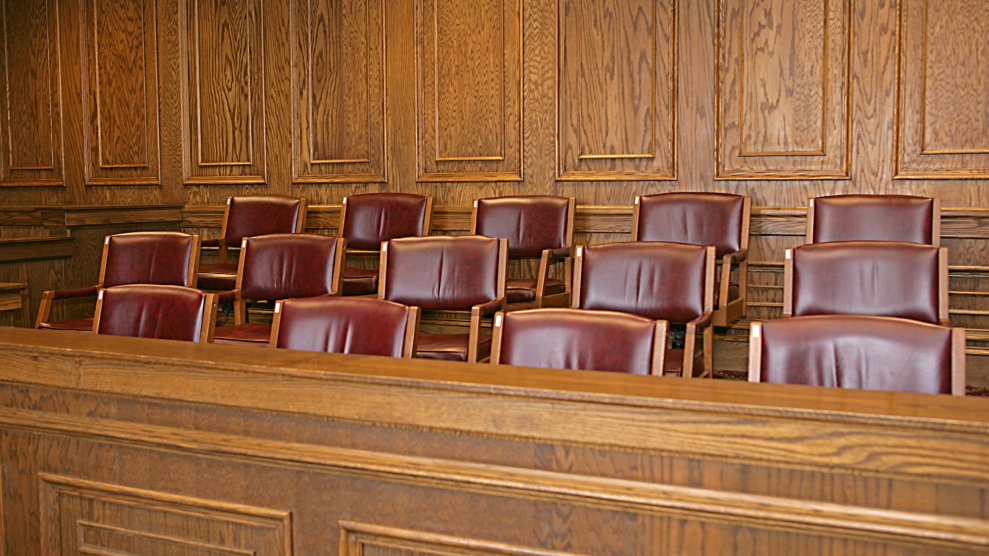 On September 25, 1990, Keith Tharpe disobeyed a judge’s orders requiring him to stay away from his estranged wife and her family after he had threatened them with violence. While his wife and her sister-in-law Jaqueline Freeman were on their way to work, Tharpe blocked their car, ordered them out of the vehicle, and shot Freeman twice, killing her. He then drove away with his wife, parked on the side of a road, and raped her. Tharpe was charged with malice murder, two counts of kidnapping with bodily injury, and armed robbery. In January 1991, he was convicted of the murder and kidnapping charges and sentenced to death. He’s been on death row at Georgia Diagnostic and Classification Prison ever since.

Despite some of the facts, this isn’t an open-and-shut case. One of the white jurors on the case may have voted for the death penalty because Tharpe is black. According to court documents, Barney Gattie, a white juror, said he believed there were two types of black people: “regular black folks” and “niggers.” The victim, in Gattie’s opinion, was black, but Tharpe was a “nigger.” He told one of Tharpe’s lawyers that this distinction factored into his decision on whether to vote for death. Although this raises serious questions about racial bias in cases involving capital punishment, no court has ever examined Tharpe’s claim. Now, nearly 30 years after he was first sentenced to die, the US Supreme Court is going to decide if a death penalty case tainted by racism will be reviewed by the highest court in the land.

The death penalty has been slowly losing support among even its most traditional supporters for many reasons. Studies have demonstrated it doesn’t deter crime, for instance, and repeated problems with the drugs that are used has undermined arguments that it’s a humane way to die. But another reason for its dwindling popularity is its systemic racial bias. Countless studies have shown that race plays an outsize role in who lives and who dies. For example, all seven of the death sentences handed down in 2018 were to men of color. Between 2014 and 2018, Texas sentenced 28 people to death—20 of them belonging to a minority race. “Racial bias, conscious or unconscious, plays a role in the death penalty decisions across America, influencing who faces this ultimate punishment, who sits on the jury…and who is given life or death,” Jeff Robinson, the director of the Trone Center for Justice, said in 2018.

“Racial bias, conscious or unconscious, plays a role in the death penalty decisions across America, influencing who faces this ultimate punishment, who sits on the jury…and who is given life or death.”

The Supreme Court has weighed in on racial bias before. In 2017, the justices ruled in Pena-Rodriguez v. Colorado that laws that prevent the jury’s verdict from being impeached do not apply when racial bias plays a role. Notably, Justice Clarence Thomas, the lone black justice and only the second black person to sit on the court, filed the dissenting opinion. That same year, in Buck v. Davis, the justices ruled in favor of Duane Buck, a death row inmate who alleged racial bias during his trial. In Texas, jurors can only sentence a defendant to death if prosecutors can prove that he will be a future danger to society. At Buck’s trial, a psychologist testified that black defendants are more dangerous than white ones. Once again, Thomas filed the dissenting opinion. Buck’s sentence was ultimately reduced to life in prison.

But Tharpe’s case focuses on the question of how an individual juror’s views on race affected the defendant’s sentence. “Mr. Tharpe is clearly facing execution in part because he is black,” said Sam Spital, the counsel of record for the NAACP Legal Defense Fund, which has filed an amicus brief on behalf of Tharpe. “The Supreme Court has to take a very firm position that racial discrimination has no place in the administration of the criminal justice system.”

As is customary in death penalty cases, Tharpe’s post-conviction lawyers began the appeals process. As part of his appeals to the state, in 1998 his lawyers interviewed the 12 jurors who had sentenced their client to death. Gattie signed a sworn affidavit. In it, he stated abhorrent views about black people. “After studying the Bible,” he said, “I have wondered if black people even have souls.” Referring to O.J. Simpson, the black football player who was acquitted in the murder of his white ex-wife, Gattie noted, “Integration started in Genesis. I think they are wrong. For example, look at OJ Simpson. That white woman wouldn’t have been killed if she hadn’t have married that black man.”

After attorney Laura-Hill Patton interviewed Gattie, she concluded that clearly the juror harbored racist views. Another lawyer, Diana Holt, returned one week later and asked Gattie to review the draft of the affidavit from the first interview. Before signing the document, Gattie stated that all of it was correct save for one sentence in which he intended to say “integration” instead of interracial marriage. He initialed the correction. The following day, Gattie signed a second affidavit on behalf of the state, claiming he was drunk and never used a racial slur when describing Tharpe. He did not disavow his statements about black people being divided into two groups. After filing the second affidavit, the state also moved to exclude Gattie’s original affidavit because it violated a Georgia law that does not allow the jury’s verdict to be impeached.

According to court documents, after an evidentiary hearing in 1998, Tharpe’s case languished and both sides changed attorneys. Then, in 2007, the state appeals court held hearings about an intellectual disability claim but did say this about the juror bias claim: “[T]he fact that some jurors exhibited certain prejudices, biases, misunderstandings as to the law, or other characteristics that are not conducive to neutral and competent fact-finding is not a basis for impeaching the jury’s verdict.”

Finally, in 2010, Tharpe’s case made it to the 11th Circuit. It ruled that the state’s previous ruling on his juror claims could stand because he hadn’t raised the claim early enough. In other words, the delay prevented Gattie’s racial bias from being taken into consideration.

Tharpe’s attorneys appealed, and the day he was supposed to be executed, September 26, 2017, the Supreme Court issued a last-minute stay and remanded the case back to the 11th Circuit for reconsideration. In 2018, the federal court once again denied the defendant, saying he was barred from raising the claim.

“The ultimate goal is to not have Mr. Tharpe executed on the basis of racism,” says Marcy Widder, one of Tharpe’s lawyers. “The Supreme Court is really the last court that can do anything about it.” She describes the case as being “pretty starkly racist in the standard, old-fashioned way.”

The court is expected to decide in early March whether it will hear Tharpe’s case. Their decision, either way, will speak volumes. “It will be very troubling if the court does not intervene,” Spital says. “You have such strong evidence that racial discrimination affects [his case].”