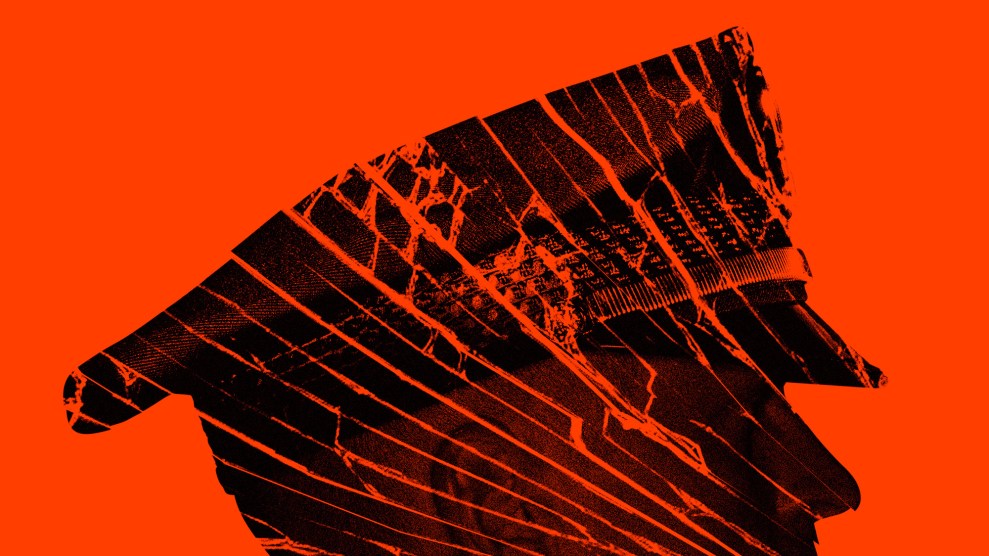 On the dimly lit second floor of Stockton, California’s police headquarters, Lieutenant Brad Burrell addressed a room full of recent cadets: “Please come into this with a very open mind,” he told the seated officers, who had just signed up to patrol one of America’s most dangerous cities. Burrell, a tattooed combat veteran, was leading a daylong training intended to help the city’s next generation of cops talk about their feelings and cope with stress. “I sat on these very seats many, many years ago and thought, ‘I don’t need this junk,’” he said. “I was very wrong.”

In 2014, after the killings of Michael Brown in Missouri and Eric Garner in New York sparked nationwide protests over police violence, Barack Obama created the President’s Task Force on 21st Century Policing. The committee would develop strategies not only for building trust between cops and communities, but also for addressing mental health problems among law enforcement. Nationally, more active-duty officers die from suicide than from shootings and traffic accidents combined—about 11 or 12 per month, according to some studies, and at least 27 so far in 2019, according to Karen Solomon, president of the group Blue H.E.L.P. And an estimated 150,000 cops show up to work with symptoms of post-traumatic stress disorder, a condition that’s often linked with heightened vigilance and could potentially affect their decision-making in fast-moving, high-pressure encounters—like when a suspect on the street reaches into a pocket for what may or may not be a gun.

The science is new, but as researchers begin to explore how trauma might affect cops on the job, more police departments are paying attention to their officers’ emotional wellbeing. They’re trying out everything from meditation apps to napping protocols to more traditional resources like counseling and chaplain programs. Last year, 115 agencies applied for a national award recognizing innovation in officer wellness and mental health programs, up from 10 agencies the year before.

More active-duty officers die from suicide than from shootings and traffic accidents combined.

Stockton’s wellness network, as it’s called, is hailed as a national model. It stands out partly because of its eight-hour training session about wellness and spirituality taught during officer orientation. Over the course of the day, they’ll talk about their heightened odds of alcoholism and divorce, learn about the benefits of seeing a staff psychologist, and even hear advice from philosopher Friedrich Nietzsche: “Whoever fights monsters should see to it that in the process he does not become a monster,” one of the instructors quoted from a PowerPoint on the day I visited the training last February.

Though Brown’s and Garner’s deaths may have rattled the Stockton police, they weren’t the catalyst for the department’s decision to ramp up its mental health offerings. It was an incident closer to home. In July 2014, a trio of bank robbers pulled three hostages into a getaway car and led dozens of Stockton officers, including Burrell, on an hourlong chase—shooting up more than a dozen police cars along the way with an AK-47 thrust out the back window. When the officers responded with 600 bullets, a level of force that independent investigators later described as “excessive and unnecessary,” they killed one of the hostages, a mother of two whose family would later sue the agency for its handling of the incident. It was “the most intense thing our department has gone through,” Chief Eric Jones says.

The hostage situation came during a rough stretch for the Stockton department, which had laid off roughly 100 employees and cut some officers’ paychecks by nearly a third after the city filed for bankruptcy two years earlier. Desperate to boost morale, Jones got serious about his officers’ emotional needs. The agency already had a psychologist for staffers. Jones decided to train more peer support officers who could lend a hand to colleagues during hard times, whether by bringing water and a change of clothes to the scene of a shooting or sticking around to listen and debrief afterward.

Burrell, who joined the force in 2006, was selected to shepherd the wellness programs. He started by showing up at roll call with business cards and encouraging people to swing by his office if they ever wanted to talk. The agency also launched a CrossFit competition and gave new employees a book about police psychology. Its team of chaplains, volunteers of multiple faiths, grew to dozens.

At the new officer training I observed last February, Burrell teamed up with Jesse Kenyon, the agency’s chief chaplain. Kenyon, a former cop and military medic, tutored the cadets about the body’s chemical responses to stress and ways to calm down from a state of prolonged high alertness. He suggested exercising for at least 22 minutes after work. Or they could practice mindfulness techniques to fall asleep: For instance, closing one’s eyes and attempting to recall all the objects in a bedroom. “In your mind, think, ‘Okay, on my nightstand I have a lamp, I’ve got a cup of coffee, I’ve got a plant,’” he told them. “I don’t even make it halfway around the room.”

Some of the new officers there were no strangers to trauma. The class counted at least three military veterans among its ranks, including two who admitted they slept less than three hours the night before. Another, Morin Yom, worked as a correctional officer at the Fresno jail before coming to Stockton. He said one of his colleagues in Fresno remained in a vegetative state after being shot in the jail’s front lobby two years before. Yom couldn’t stop thinking about him: “I’d lay in bed and my mind would start wandering: ‘Man, is that guy going to die? Man, did I do the right thing?’”

“I’d lay in bed and my mind would start wandering: ‘Man, is that guy going to die? Man, did I do the right thing?’”

Even if they were lucky enough to avoid serious trauma in the past, many officers will develop PTSD on the job—between 9 and 19 percent of officers nationally are at risk for the disorder, according to an expert on police stress at the State University of New York-Buffalo. Sometimes the condition is triggered by a single incident, but often it’s the result of years of exposure to violence. “Cops see stuff that’s unimaginable,” said Ron Clark, a retired Connecticut police sergeant who works for an organization that used to track police suicides.

In 2017, the Justice Department awarded researchers at the State University of New York-Buffalo an $814,000 grant to investigate how exposure to trauma affects officers’ ability to make good choices in stressful situations. In a previous study, cops took a computer test with instructions to push a button as quickly as possible whenever a particular sequence of two letters flashed. In instances when the wrong sequence flashed, those with PTSD had a harder time refraining from the button, notes Janet L. Shucard, one of the researchers. For the new study, which will build off that research, Shucard and her team “hypothesize that PTSD impairs the attention and response control processes that are necessary for rapid and accurate decision making.”

Stockton hopes to help officers avoid reaching that point. In 2017, its police department won a national award from the Bureau of Justice Assistance and the National Law Enforcement Officers Memorial Fund for its wellness network. Nick Breul, a retired cop who then worked for the Washington, DC-based fund, says judges were impressed by how comprehensive and proactive it was. For instance, he noted that Stockton sends a peer support officer to the scene of a shooting or to locations where a child has been found dead, rather than waiting for the involved cop to come back to headquarters, a strategy that’s “not as common as one would think,” Breul says. “There’s a great disparity across the country as to how a lot of those things are handled.”

Between 9 and 19 percent of officers nationally are at risk for PTSD.

With more emphasis on officers’ wellbeing, the department has handled fewer workman’s compensation claims than it did in the past. The number of complaints about officer use of force has also dropped—from eight complaints in 2014 to half that in 2017, in part, perhaps, because of better de-escalation training, body cameras, and a major grant from the Justice Department to improve trust between officers and the local community. “I’m not seeing cowboy behavior hardly at all anymore—that ‘I’m special forces’ kind of attitude,” says Fred Sheil an activist who has spent 26 years trying to improve interactions between cops and residents in predominately African American and Hispanic neighborhoods of southeast Stockton as part of a group called Stocktonians Taking Action to Neutralize Drugs. “They are definitely being more respectful no matter the situation.” The agency has met with neighborhood leaders, who “for the first time see officers as people, not as a nonhuman police officer,” says Hector Lara, executive director of Reinvent South Stockton Coalition, another grassroots group. Beyond good will, these efforts appear to be working in another important way: Violent crime decreased in the city by 15 percent from 2012 to 2017, according to Burrell.

Still, Stockton saw at least two police suicides over the past few years, including a newly hired cadet who drove out to an orchard and shot himself. One hurdle is convincing veteran officers to ask for help. “It could be a generational thing,” said Sergeant Brian Fry, who has been with the agency for about 18 years. Some cops are wary about looking weak. Fry admitted that he hadn’t made use of the wellness network himself, but he alerts Burrell if one of the younger officers on his team seems shaken by an incident.

Fry thinks the wellness training will have the biggest impact on newer officers. As Stockton bounces back from bankruptcy, the department has hired hundreds of employees. Since retention has been a problem there, and nationwide, “you’re seeing agencies make greater pushes for officer safety and wellness,” adds Breul, the ex-cop formerly at the National Law Enforcement Officers Memorial Fund. “It’s an investment in the future.”

At the end of a long day of training, the new officers left with a homework assignment. Over the next several days, they would each have to ask a close friend or family member for a bit of help. Burrell explained, “The conversation can be however you want, but substantively it just needs to be, ‘Hey, listen, I’m about to embark on the greatest adventure of my life. But if you see me change in a negative way, I give you permission to call me on my shit. I give you permission to sit down with me and say, ‘I don’t like what I see.’”