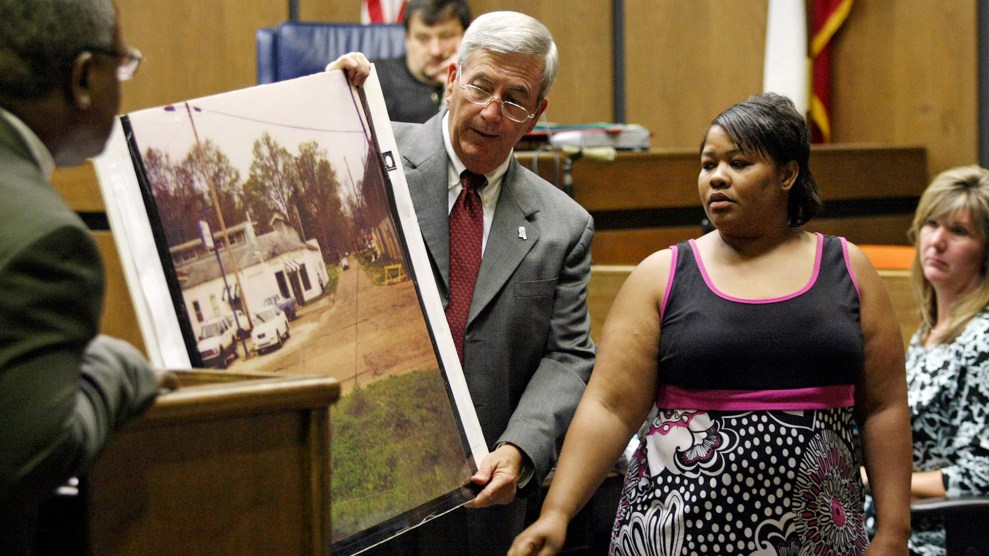 Prosecutor Doug Evans with a witness at a 2010 trial for Curtis Flowers in MississippiTaylor Kuykendall/The Commonwealth via AP, File

In 1997, Curtis Flowers, a black man in Mississippi, was indicted for the murder of four employees at a furniture shop where he used to work. Over the next 13 years, he would be tried a staggering six times. He was ultimately sentenced to death in 2010 by a jury composed of 11 white members and one black member, but he maintains he is innocent.

On Wednesday, as Flowers’ case went before the Supreme Court, his attorneys argued that racial bias played a role in the jury selection and unfairly led to his conviction. It had happened to Flowers before: Of the five trials before 2010, two were thrown out after lower courts determined that the prosecutor removed certain people from the jury pool simply because they were black, violating a 1986 Supreme Court ruling called Batson v. Kentucky that says it’s unconstitutional to strike potential jurors on account of their race.

Prosecutors in North Carolina removed African American jurors at about twice the rate that they removed white jurors.

This kind of racial bias is common in courtrooms. During jury selection, prosecutors and defense attorneys are allowed a certain number of “peremptory challenges” to strike potential jurors—they can ask to nix them from the lineup without explaining why. If one side suspects race motivated the request, it can file a motion for a Batson test, and the other side must provide another justification for the strike.

But as critics point out, it’s fairly easy to come up with another justification, even when race is the motivating factor. Courts have found it acceptable to exclude potential jurors because they had bad posture, lived in a dangerous neighborhood, or had a beard. In Flowers’ sixth trial, District Attorney Doug Evans reasoned he was striking some of the black potential jurors because they knew the Flowers family, even though some white jurors had connections to the family as well. In North Carolina, a major study last year found that prosecutors in the state removed African American jurors at about twice the rate that they removed white jurors, a pattern that likely holds up in other states.

On Wednesday, the Supreme Court’s liberal and conservative justices seemed sympathetic to Flowers. But even if the high court rules in his favor, what are the odds they’ll substantially strengthen the Batson test—to make it harder for trial lawyers in other cases to strike jurors of color?

Ronald Wright, a professor and former Justice Department attorney who helped conduct the North Carolina study, isn’t optimistic. For decades, he points out, people have asked the high court to give Batson more teeth, but it hasn’t yet: Prosecutors (and defense attorneys) can still fairly easily exclude people of color from juries. In 2016, for example, in a case called Foster v. Chatman, the justices ruled in favor of a defendant who claimed racial bias tainted jury selection, but their decision was so narrow it did little to help anyone else. “Once every five years or so there will be the Batson case, and people will kind of hold their breath and wonder if this is the time the court will strengthen the test,” says Wright. “People are forever hopeful about this and forever disappointed.”

But even if the Supreme Court doesn’t tackle Batson in a meaningful way during the Flowers case, individual states could make a difference. Wright spelled out three possible solutions:

1. Limit attorneys’ power to strike jurors. Since it’s so easy for prosecutors and defense attorneys to shroud discriminatory intent during jury selection, one possibility would be to get rid of peremptory challenges. Courts would still pick and choose from a pool of potential jurors, but judges would only remove people who don’t qualify for a set list of reasons, like if they are deemed unable to follow established law while hearing the case. In 1986, in a concurring opinion for Batson v. Kentucky, Justice Thurgood Marshall actually suggested that courts end peremptory challenges, arguing that they failed to protect defendants’ rights to a fair trial. The suggestion has popped up regularly since then, says Wright, but it’s never gained enough support, largely because prosecutors and defense attorneys don’t want to give up their power to shape juries. “Whenever you talk about getting rid of peremptories, everyone lines up against you,” says Wright. The Supreme Court isn’t likely to go this route. “At this point, it’s clear there is no constitutional doctrine that would outlaw peremptory challenges,” Wright says. But a state legislature could decide to, he says, or lower-court judges could opt to change the procedural rules of their courts to achieve it.

2. Follow Washington’s lead. Last April, the Washington state Supreme Court approved a new rule that makes it harder to remove potential jurors of color by outlawing certain types of peremptory challenges. Specifically, attorneys there can no longer request to strike jurors for reasons that are highly correlated with race, like “prior contact with law enforcement.” They also can’t veto potential jurors for “expressing a distrust of law enforcement or a belief that law enforcement officers engage in racial profiling; having a close relationship with people who have been stopped, arrested, or convicted of a crime; living in a high-crime neighborhood; having a child outside of marriage; receiving state benefits; and not being a native English speaker.” Wright says it’s too early to know how this rule has affected the racial composition of juries in the state because the data isn’t out yet.

3. Publish the data. Wright says publishing more information about jury selection could help tackle the problem of racial bias. Courts already collect data about whom judges, prosecutors, and defense attorneys are removing from juries, but it’s not normally published. If states changed their public records laws and required courts to share this information, it could affect the reputations of the prosecutors and judges who rely on voters to elect them to their positions. “If there is a judge way out-of-line in terms of a pattern of racial exclusion, or a prosecutor’s office way out-of-line, then that might start to figure in a reelection campaign,” Wright says. “Maybe we should elect someone who will be more aware of this and not produce such outlandish numbers.” He doesn’t know of any states that have adopted this approach, but he and some colleagues are currently pitching the idea to legislators in North Carolina.