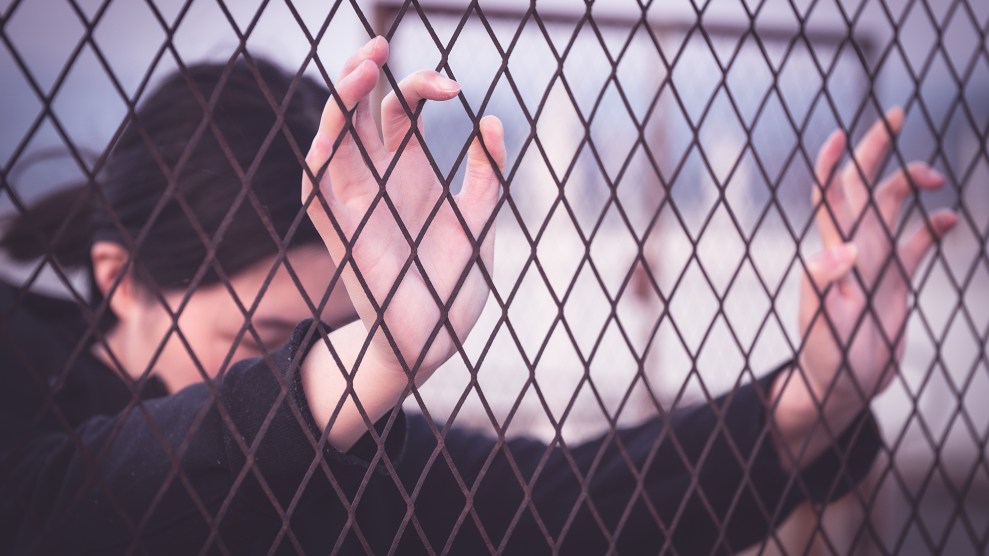 In 2015, Renata Singleton, an accountant in New Orleans, arrived at court in an orange jumpsuit, shackled at her hands and feet. But unlike the other inmates she was chained to, Singleton, a mother of three, hadn’t been accused of any crime. She was still jailed five days earlier on a $100,000 bond because the local district attorney obtained a warrant arguing that her detention was necessary to force her to testify against her ex-boyfriend, who was facing charges for abusing her. He came to court in his own clothes, pleaded guilty, and received no jail time.

A new Louisiana bill would prevent district attorneys in the state from jailing people like Singleton. A court order known as a “material witness warrant” allows prosecutors to temporarily lock up crime victims who might otherwise not testify. The warrants are used around the country, from Oregon to Texas, in many types of cases. The Louisiana bill, which recently advanced out of a state Senate committee and will now head for a floor vote, would prevent these warrants from being used against survivors of domestic violence and sexual assault.

Critics point out that this practice traumatizes survivors who did nothing wrong.

This week, the Louisiana District Attorneys Association pushed back against the proposed legislation, arguing that it is sometimes necessary to detain abuse victims so they can help convict people who committed violent crimes. But critics point out that this practice traumatizes survivors who did nothing wrong. “It is most cruel way to try to entice testimony from someone,” New Orleans City Councilwoman Helena Moreno, a supporter of the legislation, told senators in a hearing on Tuesday, according to the Times-Picayune.

State Sen. J.P. Morrell, a Democrat from New Orleans, sponsored the bill after a watchdog group pointed out that the city’s district attorney temporarily jailed at least two women in 2016 who had survived rape and domestic violence. “In each instance, the witness testimony was deemed critical to preventing a dangerous offender from walking free to victimize others,” DA Leon Cannizzaro said in a statement about his use of the tactic. He is currently fighting a lawsuit, filed in 2017 on behalf of Singleton and other plaintiffs who were jailed or threatened with detention. “One rape victim spent 12 days in jail before her first court appearance,” the suit says. “A victim of child sex trafficking was jailed for 89 days—including Christmas and New Year’s Day—before she had an opportunity to challenge her confinement.”

The New Orleans City Council passed two resolutions urging Cannizzaro to end this practice, but he declined to do so. “This tool is very, very necessary for us to use on rare occasions,” Charles Ballay, head of the Louisiana District Attorneys Association, told senators of material witness warrants in the committee hearing this week. He said all DAs in the state oppose the legislation. “This is rarely, rarely ever used, but it is a tool that must be used sometimes,” he added. The group estimates that out of 750,000 cases from 2012 to 2017, roughly 150 material witness warrants were approved by judges in Louisiana, and that few of those were against sexual assault or domestic violence victims.

However rare the practice may be, there have been horror stories. In 2016, I reported on some in other states:

Usually victims are held for less than a week, the Oregonian reports, but Oregon has no limit on the duration of detention in these cases. One material witness in the state was held for 900 days in a murder case before he was released last year. Victims rights advocates warn there are consequences to holding sexual-abuse victims in jail, noting that it can deter other victims from bringing their cases forward. “It has a terrible ripple effect,” says Jessica Mindlin, an Oregon-based attorney at the Victim Rights Law Center…

This summer, a 25-year-old rape victim with bipolar disorder had a mental breakdown on the stand in Harris County, Texas, making national headlines. Prosecutors worried she might not return to court to testify again, so she was jailed for about a month. But the county jail mistakenly admitted the woman as a defendant of sexual assault, rather than a victim, according to a lawsuit filed against the county in June. While she was there, she was allegedly attacked by an inmate and punched in the face by a guard. Harris County District Attorney Devon Anderson defended the decision to jail her: “If nothing was done to prevent the victim from leaving Harris County in the middle of trial, a serial rapist would have gone free—and her life would have been at risk while homeless on the street,” she said in a video statement.

[Mindlen] recognizes that prosecutors are trying to make sure criminals can be taken to court. But “if what you are doing is creating barriers to victims coming forward and seeking help and safety,” she adds, “in the end all you’re doing is making your community even more dangerous, not less.”

In New Orleans, Moreno of the city council argues there are less harmful ways to ensure that abuse victims testify, whether by requiring them to stay in safe houses or forcing them to wear an ankle monitor. “Sometimes when something is wrong, you have to correct it,” state Sen. Morrell reportedly told senators of the material witness warrants.

By the time Singleton was released from her stint in the New Orleans jail, she had lost eight pounds. She had been worried about her three children while she was away, and about her odds of getting fired from her new job. The court gave her an ankle monitor, which she hid from her kids by wearing bellbottom jeans. But the arrest, according to the lawsuit, continued to be “a persistent source of humiliation and shame.” Her mugshot could now be found online. And it “left another mark as well,” the lawsuit added. “Ms. Singleton is afraid to ever call the police again.”