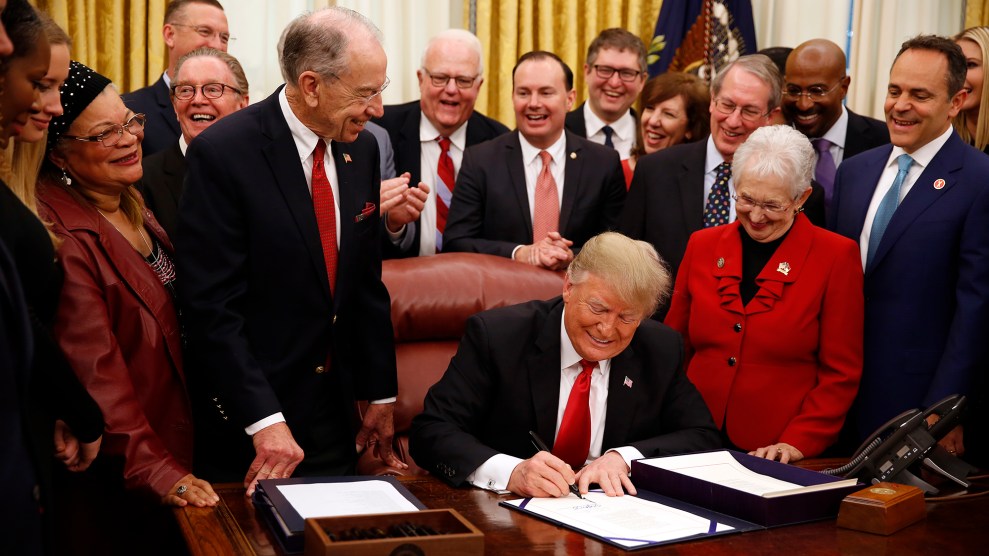 President Trump participates in a signing ceremony for the First Step Act in December.Martin Simon/picture-alliance/dpa/AP Images

President Donald Trump is hosting a party at the White House on Monday to celebrate the First Step Act, the first major criminal justice reform bill to pass Congress in a generation. Signed into law in December, it’s Trump’s biggest bipartisan victory so far—one he’s expected to tout on the campaign trail this year—and his team has invited about 300 guests to attend the event, including formerly incarcerated people. Housing and Urban Development Secretary Ben Carson will lead a session on reentry, and Ivanka Trump will help with another about incarcerated women.

But the celebration could be premature: Criminal justice reform groups point out that the administration has so far struggled to implement the law, and has failed to fully fund its programs. As Trump continues to brag about the measure, inmates at federal prisons around the country are left in limbo, and many wonder when or if they’ll see the benefits of the law’s promised reforms.

Criminal justice reform groups point out that the administration has so far struggled to implement the law, and has failed to fully fund its programs.

The First Step Act calls for $75 million in funding per year for five years, starting in 2019, to implement an array of changes to the federal prison system and sentencing rules. But Congress didn’t allocate any funds for the law in the 2019 fiscal year. And Trump’s proposed 2020 budget sets aside only $14 million to implement it, far short of the amount specified.

Backers of the First Step Act are also concerned about the administration’s ability to follow through on another key goal of the law, which is to create new rehabilitation and training programs for prisoners, which lawmakers hope will help them find jobs when they reenter their communities and reduce their chances of recidivism. In order to determine which inmates can participate in these programs, the law required the Justice Department to set up a committee in January to develop a risk and needs assessment tool. But the department missed that deadline and even now has yet to convene the committee, raising doubts about whether it will successfully finish creating the tool by July, as the law mandates.

And a lot is riding on that tool. After it’s up and running, prisoners who participate in rehabilitative programs can be rewarded with additional time in halfway houses at the end of their sentence. Another crucial component of the law depends on the tool as well: The First Step Act promised to let incarcerated people accrue extra time off their sentences for good behavior, a change that some criminal justice reform groups believed would let about 4,000 prisoners head home right away. But as I reported in February, after the law passed, the Federal Bureau of Prisons announced that these prisoners can’t accrue the extra time off until the Justice Department finishes developing the risk assessment tool.

All these problems don’t discount the fact that the law has done some good so far: More than 500 inmates have been released, partly because of reforms to crack cocaine sentencing and “compassionate release,” which gives people dealing with serious illnesses a chance to go home. And according to the New York Times, the Federal Bureau of Prisons said in a recent budget justification document that funding the First Step Act is a “priority,” and that it plans to reserve $147 million in the 2020 fiscal year for activities related to the law’s implementation. A senior administration official told NPR that the administration hopes to set up the risk assessment committee “as soon as possible.”

“Americans have always believed in the power of redemption—that those who have fallen can work toward brighter days ahead,” Trump proclaimed ahead of the event, declaring that April would officially be Second Chance Month. “My Administration is committed to helping former prisoners reenter society as productive, law-abiding citizens.” But the missed deadlines and his own paltry budget requests will cast a shadow on the celebration and leave some wondering how much of it is just for show.