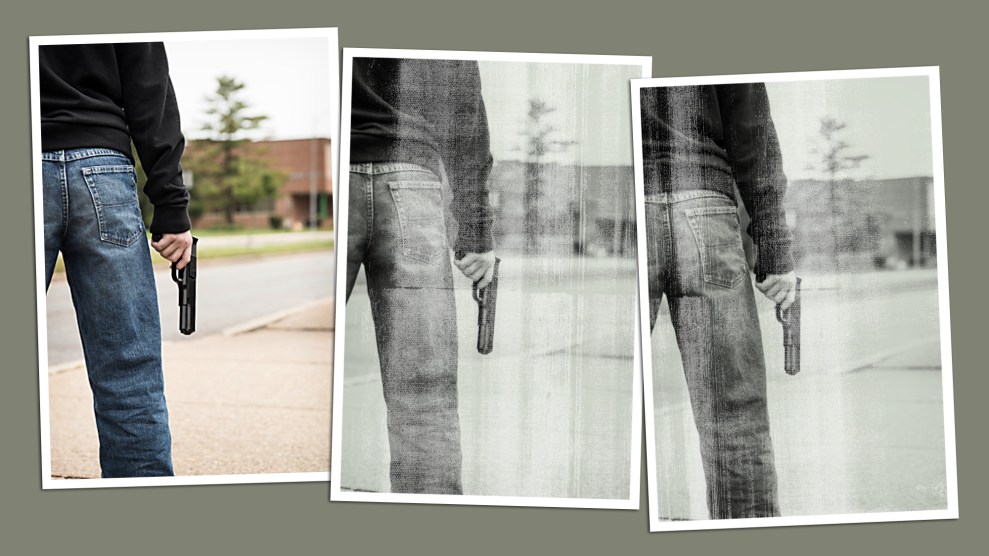 Editor’s note, 11:45 a.m. PDT: An armed woman “infatuated” with Columbine who prompted the shutdown of hundreds of Colorado schools shortly after we published this story was found dead from an apparent suicide, according to authorities.

Two of the future shooters were just infants and a third wasn’t even born yet when Columbine happened. But by the time they each attacked their schools last year, all three young men had drawn inspiration from the pair who committed suicidal mass murder at their Colorado high school on April 20, 1999.

“I’m thinking about doing my school the same way,” one commented online prior to opening fire at his former high school in Ocala, Florida, 19 years later to the day. “Everybody will know my name,” he added. The shooter in Parkland, Florida, also researched the Columbine attack, and recorded himself on video: “When you see me on the news, you’ll all know who I am.” The high school junior who went on a rampage last May in Santa Fe, Texas, wore a trench coat and insignia that echoed the Columbine perpetrators’ attire.

There have been many others like them: young men (and a few young women) who have plotted or carried out violent attacks that were influenced by the “Columbine effect.” When I first reported in 2015 about this phenomenon and the media’s growing role in motivating mass shooters, our Mother Jones investigation documented the Columbine effect in 74 plots and attacks spanning 30 states. The data, drawn from news coverage, public records, and interviews with mental health and law enforcement experts, revealed some stark behavioral patterns—all linked to the perpetrators’ desire for media attention and notoriety. Some planned to strike on the anniversary of the Columbine attack, like the shooter in Ocala last April. (There have been at least 18 anniversary-related plots and attacks.) Others aspired to outdo the Columbine body count. Many explicitly identified with the Columbine shooters, hailing them as “heroes,” “martyrs,” or “gods.” Some even took pilgrimage-style trips to suburban Denver, from as far away as North Carolina and Washington state, to visit Columbine High School before returning home to carry out shootings.

Today, the Columbine effect is even more grimly pronounced than it was in 2015. Additional cases since then bring the total to more than 100 plots and attacks influenced by the 1999 shooting. And those are just the cases for which there is some kind of public record: In talking with law enforcement and mental health sources who work to prevent such attacks, I’ve learned of dozens more Columbine-influenced threats that never made the news.

“We’ve taken more guns off kids this year than any other year, and it’s not just here. My counterparts I’m talking to around the country are seeing the same thing.”

As the response to the recent massacre in New Zealand showed, public officials and the media have made some improvement on how they react to mass shooters—downplaying their names and faces and choosing not to publish gruesome footage or images—to avoid granting shooters the infamy they seek. But the blitz of media coverage for this week’s 20th anniversary of the Columbine attack has once again put the perpetrators on display. Again, we see the familiar image from surveillance footage of one of them wielding a gun in the school cafeteria. Again, from videos the pair recorded, we see images of them in their trench coats and sunglasses, grinning with their weapons in hand.

Shooter-focused media coverage does not cause a person to commit violence. Nor do various salacious internet sites devoted to Columbine or other high-profile cases. Most mass shooters are motivated by a complex set of factors including entrenched grievances and behavioral health problems, as detailed in a major study from the FBI published last year. But the impact from persistent sensational coverage of the Columbine shooters—produced with what purpose?—keeps showing up in case after case. They often get renewed publicity after the latest school shooting. In the view of several mental health experts I’ve spoken with, such content has fed an enduring false narrative that the pair were social outcasts who took a stand against bullying. (In reality, sociopathy, suicidal depression, and other factors drove their behavior.)

Listen to Mark Follman discuss his investigation into copycat shooters, and how the media, mental health experts and public officials are responding, on the Mother Jones podcast:

Kris Mohandie, a forensic psychologist who has assessed youth offenders fixated on Columbine, says the massacre should no longer be treated as some dark cultural touchstone. “Those two offenders should be made as anonymous as possible,” he says. “I think the reporting needs to downplay the people who did it, while underscoring what we’ve learned about how to manage these kinds of people, the things wrong with them.”

The fact that Columbine grew to be shorthand has itself fueled the problem.

“Every single school shooting, the media calls it a Columbine-style attack,” says John McDonald, a threat assessment expert who oversees security for the 157 public schools serving roughly 85,000 students in Colorado’s Jefferson County, including Columbine High School. The worsening copycat problem has tracked with a rise in threat cases more broadly. “We’ve taken more guns off kids this year than any other year, and it’s not just here,” McDonald told me. “My counterparts I’m talking to around the country are seeing the same thing.” Following a string of workplace shootings in the 1980s, he noted, “It used to be called ‘going postal.’ Now it’s ‘doing a Columbine.’”

JeffCo, as the region is known locally, has seen a sharp rise in threat cases in each of the past several years, including a fresh one that disrupted its school system this week. The district has already logged more than 800 cases in the current school year; until the rate began climbing six years ago, there were fewer than 100 cases annually. As of mid-April, 46 of this year’s cases were serious enough to be elevated from the individual school level to JeffCo’s district-wide threat assessment team, which taps additional expertise to handle the most worrisome cases. The surge in threats has included outsiders increasingly showing up at Columbine, according to McDonald. And the other disturbing behavioral patterns continue: In March, a Texas man armed with a knife told an officer who intercepted him in the Columbine parking lot that “the soul” of one of the shooters “lives in my heart.”

The Columbine effect hasn’t just been exacerbated by news outlets; public officials around the country routinely describe threats to schools as “Columbine-style plots,” sometimes even when there is no specific indication of a copycat factor. The problem has also spread internationally in recent years: There have been at least a dozen Columbine-influenced cases ranging from Canada to countries in Europe and Latin America, including a suicidal mass shooting carried out last month at a school in Brazil by two former students.

With April 20 approaching, public attention should focus on the resiliency of the Columbine survivors and community, and on lessons learned about safety and prevention. One strategic legacy of Columbine is that law enforcement no longer waits to move in and confront active shooters. Experts have learned a lot since 1999 about behaviors and motivations that can lead to gun rampages, including the allure of the media spotlight.

To the extent that the focus remains on them, “those two offenders would be nothing but thrilled to see that there’s a two-decade marking of this event,” says Mohandie. “They had this grandiose fantasy that they would be remembered. What’s perverted about the whole thing is that, in a way, they got what they wanted.”