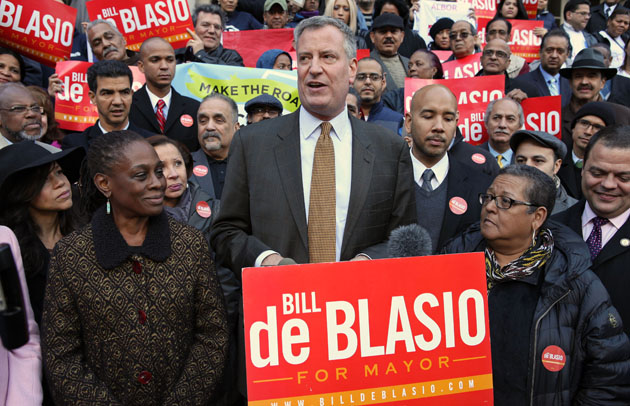 Five years to the month that Eric Garner died as the result of a chokehold meted out by New York police officer Daniel Pantaleo, 10 Democratic candidates for president stood on the debate stage in Detroit and talked about criminal justice reform. And one of those candidates, New York Mayor Bill de Blasio, can’t escape the shadow of Garner’s death.

That much was clear from the start of Wednesday night’s debate, as protesters in the audience chanted “Fire Pantaleo.” The officer has so far managed to avoid prosecution for Garner’s death and remains on the city’s police force. Some observers identified the protesters as Women’s March co-founders Tamika Mallory and Linda Sarsour, though Mother Jones could not confirm their identities.

Thank you sisters @TamikaDMallory & @lsarsour & co for protesting to hold @BilldeBlasio accountable for keeping the NYPD officer who killed Eric Garner on the job and shielded from justice. That is unacceptable. #FirePantaleo#DemDebate https://t.co/RdgOsYYBlC

After the protesters were escorted out, former Secretary of Housing and Urban Development Julián Castro attacked de Blasio for not firing Pantaleo, saying that the officer “has not been brought to justice.”

Garner was a 42-year-old black man who was confronted by Pantaleo on Staten Island in 2014 for allegedly selling unlicensed cigarettes. The ensuing alteraction was captured on video by a bystander. The video—in which Garner can be heard repeatedly yelling, “I can’t breathe!”—went viral and set off a national protest movement against police brutality. That movement was led in part by Garner’s daughter, Erica, who staged sit-ins and protests demanding accountability for her father’s death.

A Staten Island grand jury declined to bring charges against Pantaleo, and earlier this month, the Trump administration’s Department of Justice did the same. In 2015, the Garner family reached a wrongful death settlement with New York City for $5.9 million. Still, the case took its toll. Erica Garner died from a heart attack shortly after Christmas in 2017. She was 27.

When CNN host Jake Tapper questioned the candidates about the case, observers noted that he appeared to refer to Garner as “Gardner.” (The official transcript has Tapper saying “Garner,” but here’s the clip—judge for yourself at 1:30 and 4:05.)

Garner’s surviving relatives have been steadfast in their demand for Pantaleo’s termination. “The DOJ made their decision,” Garner’s mother, Gwen Carr, told reporters recently. “We are looking for de Blasio to make his. We want him to stand up as the mayor he’s supposed to be.”

New York City’s public advocate, Jumaane Williams, has also taken aim at de Blasio, telling the mayor via the New York Times, “You cannot be president, you cannot be the Democratic nominee, if Daniel Pantaleo is still on the force.”

Instead, the officer has received a 14 percent raise while working desk duty.

Meanwhile, de Blasio has repeatedly said publicly that his hands are tied and he does not have the power to fire Pantaleo—a point of deep contention among local advocates and many observers.

What’s clear is that while de Blasio delivers a populist message nationally, he’s far from a progressive hero at home.

This story has been updated to include more details of Tapper’s apparent mispronunciation of Eric Garner’s name.