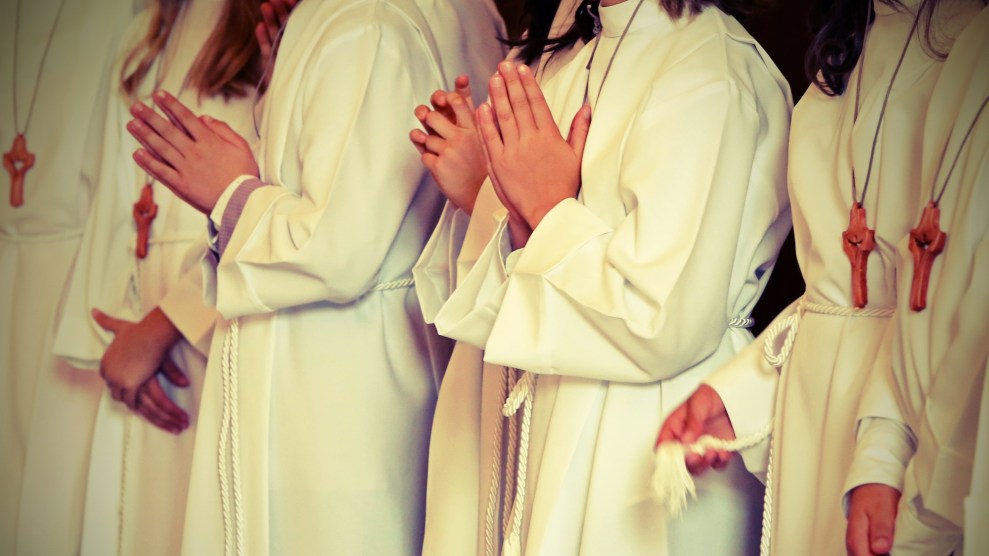 When 52-year-old Michael Whalen stood up in front of the St. Louis Roman Catholic Church in downtown Buffalo, New York, in February 2018, to tell his story of being sexually abused by a priest as a teenager, it set off a Spotlight-style chain reaction. The accused priest, the Rev. Norbert F. Orsolits, told a news reporter who knocked on the door of his cottage that he had abused “probably dozens” of boys. Within weeks, the local Catholic bishop released a list of 42 clergy members from the Diocese of Buffalo who had been accused of abuse. Local journalists later identified 85. A federal grand jury reportedly started investigating a potential cover-up in the churches of western upstate New York.

But Whalen, who has spoken publicly about how the abuse had caused him to have problems with drugs, alcohol, and family relationships, could not sue the church for damages. New York state’s statute of limitations for a civil lawsuit had already expired. The church offered him less than $50,000 in a private settlement.

That changed yesterday, as New York’s Child Victims Act (CVA) went into effect, opening a one-year “lookback window” for survivors of child abuse across the state to file lawsuits against individuals and institutions, even if the statute of limitations had previously expired.

A tsunami of lawsuits has already hit the state courts. On Wednesday alone, 439 CVA cases had been filed by 11:59 p.m., according to the New York State Unified Court System’s press office. At least 105 of those were against the Diocese of Buffalo, according to the Buffalo News. One involved the late accused sex trafficker Jeffrey Epstein. And one of them was Whalen’s. “Long time coming,” he said as his case was filed, turning to hug another survivor.

In addition to the lookback window, the law lengthens the criminal statute of limitations for child sexual abuse. Many of its other provisions apply only to survivors who had not yet turned 23 when it was signed on February 14: Those survivors have until their 25th birthdays to press misdemeanor criminal charges or their 28th birthdays to press felony charges. They also have until age 55 to file a civil lawsuit.

The idea of reopening statutes of limitations for child abuse survivors, who often wait decades to report their experiences, isn’t new. California, Minnesota, Delaware, and Hawaii have passed similar legislation, according to the Associated Press. California’s lookback window in 2003 produced more than 1,000 lawsuits, many against the Catholic Church. The Diocese of San Diego, faced with 140 lawsuits, filed for bankruptcy.

New York’s lookback bill was stuck for more than a decade in Albany, where Republicans in control of the state Senate, backed by the Catholic Church and the insurance industry, prevented it from coming to a vote. According to a report from law firms representing clergy-abuse survivors, the church spent nearly $3 million to fight the bill between 2011 and 2018. In the lead-up to the 2018 election, the Child Victims Act became a campaign issue in the fight for the state Senate, especially in heavily Catholic areas like Long Island, says state Sen. Brad Hoylman, who sponsored the bill this year. When Democrats took control of the Senate in January, the bill was finally permitted to come to a vote and passed unanimously.

“There is a direct political correlation between issues like the Child Victims Act, mandatory clergy reporting, and Democratic control of the Senate,” said Hoylman, who is also sponsoring a bill that would lift the exemption for clergy members from reporting child abuse when they learn about it through a confession.

Many of the lawsuits filed yesterday take aim at Catholic dioceses across the state, but other organizations are also facing a reckoning. The Governing Body of Jehovah’s Witnesses is a target of multiple suits. New allegations against the Boy Scouts of America include stories of abuse dating back to the 1960s. Other lawsuits accuse former public school employees of molesting students.

And 32-year-old Jennifer Araoz filed a lawsuit against the estate of Jeffery Epstein and his longtime associate, Ghislaine Maxwell, and three other Epstein employees, alleging that Epstein groomed her and raped her when she was 15 years old. “His money, influence and connections to important people made me want to hide and stay silent,” Araoz wrote in a New York Times op-ed published Wednesday. “For years I felt crushed by the power imbalance between Epstein, with his enablers, and me. The Child Victims Act finally offers a counterweight.”