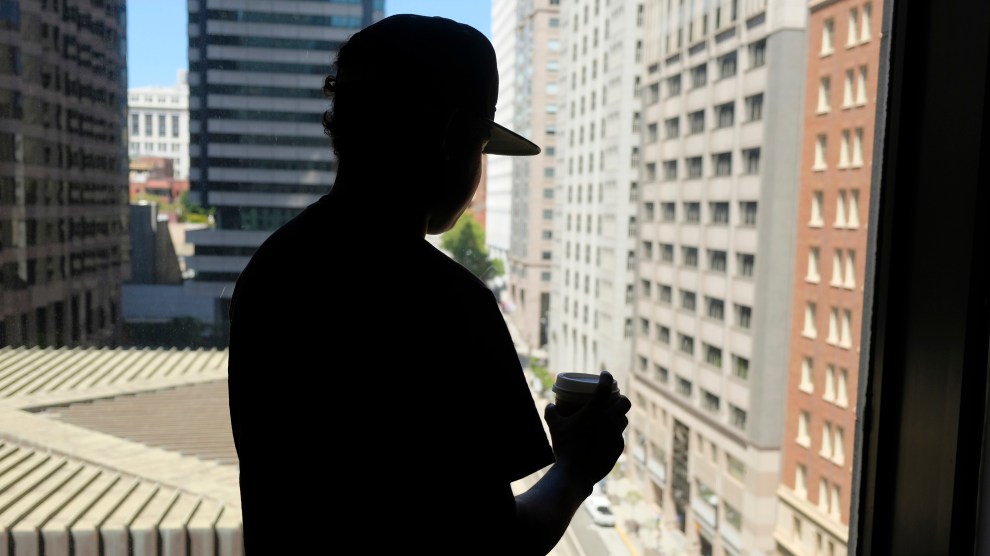 An 18-year-old Honduran who said he suffered abuse inside a Virginia immigration detention facility stands in front of a window in San Francisco. Eric Risberg, File/AP

Antonio was tired of people calling him names. Staff members at the Virginia juvenile hall where he was held would call him pendejo and “onion head,” he said. After fleeing violence in Mexico at age 15 and arriving alone at the US border, he’d been sent to Shenandoah Valley Juvenile Center in 2016 and held alongside American teens while he awaited immigration proceedings. Shenandoah is one of two juvenile halls nationally that the Office of Refugee Resettlement uses to hold unaccompanied minors who are deemed threatening.

Now a group of district attorneys from around the country—including reformers Larry Krasner, Chesa Boudin, and Kim Foxx—have filed a brief citing concerns about the immigrant teens’ treatment there.

Antonio hadn’t broken the law, but his detention in Virginia felt like a punishment: Once, when he got in a fight with an American kid who taunted him, he says staffers restrained him by tying him to a chair for four hours, allegedly hitting him while he sat there. Over a year and a half at Shenandoah, Antonio (not his real name) says he was tied to the chair about five times. In court documents, he recounted that staffers who restrained him would sometimes put a bag over his head, meant to deter biting or spitting. “It had small holes that I could see out of, but only a little,” he said.

Several other immigrants recalled similar scenarios. A boy from Honduras described his time in the chair as almost suffocating. “When you’re in crisis, the bag is the least helpful thing—it’s scary,” he said, adding that he had been diagnosed with post-traumatic stress disorder before arriving in Virginia. A third teen recalled peeing his pants while restrained in the chair.

The immigrant teens told their stories as part of a lawsuit about conditions at the juvenile hall, first filed in 2017 by the Washington Lawyers’ Committee for Civil Rights and Urban Affairs. (Their real names were redacted in legal filings to protect their privacy.) The lawsuit argued that the immigrant teens required trauma-informed mental health care, given the hardships they faced fleeing their home countries. But, the suit alleged, they were instead “subjected to unconstitutional conditions that shock the conscience,” including violence by staff, isolation, and excessive use of the restraint chair.

The case received national attention after the Associated Press reported on it, prompting Virginia Gov. Ralph Northam to order an investigation in 2018. A former child-development specialist who worked at the facility told the AP she saw kids with bruises and broken bones. In court filings, lawyers for the detention center denied all allegations of physical and verbal abuse; they admitted staffers restrained children in a chair after fighting or self-harm, but rejected the kids’ accounts about specific instances. In December 2018, a federal judge found there were grounds to allow a trial over claims of excessive force, but ruled against the claim for better mental health care.

Now, as the teens’ lawyer appeals to a higher court, they have some new allies. On January 13, dozens of elected prosecutors and criminal justice reform advocates filed a brief on their behalf, arguing that the court erred in ruling against them. The prosecutors include some of the country’s most famous reformist district and state’s attorneys: Larry Krasner of Philadelphia; Kim Foxx of Cook County, Illinois; Chesa Boudin of San Francisco; Wesley Bell of Saint Louis County; Rachael Rollins of Suffolk County, Massachusetts; and Marilyn Mosby of Baltimore. They are joined by a handful of attorneys general, including Keith Ellison of Minnesota, the former deputy chair of the Democratic National Committee. “The court’s decision,” they wrote, failed to consider that the immigrant teens “are children, and have not been adjudicated delinquent or convicted of any offense. The purpose of their detention is…to protect them from harm, not to punish them.” But, they added, staffers at the juvenile hall “responded to the Plaintiffs’ acting out with physical abuse and punitive imposition of restraints and solitary confinement.”

The lawsuit claims that immigrant teens at Shenandoah were repeatedly confined to their rooms for minor infractions like not participating in class, complaining about a headache, or accidentally hitting the ceiling with the ball while playing soccer. It says they were sometimes “stripped of their clothes, including, at times, even their underwear, while restricted to their rooms in solitary confinement.” The plaintiff, a teen from Honduras who I’ll call Carlos, told the court about lying face-down on the floor in nothing but his boxers as punishment; repeatedly landing in room confinement for saying angry words and threatening staff members; and taking blows from staffers who hit him for misbehaving. The suit argues these experiences led to further trauma and exacerbated his mental illnesses.

Advocates for immigrant kids argue that aggression or bad behaviors exhibited at shelters generally stem from untreated mental illness, often resulting from trauma they experienced in their home countries or while fleeing. Some of the children interviewed as part of the lawsuit reported previous abuse by family members or strangers, witnessing murders of friends and relatives, being exploited for their labor, and enduring assaults.

Some immigrants started engaging in self-harm at the facility; Antonio said he became suicidal, cut his wrists with a piece of glass or plastic, and banged his head against the floor because he was sad. Another boy said that after he slammed his fist into a door, staffers handcuffed him and strapped him into the chair as he cried. “Staff said that they did it to calm me down,” he said in court filings. Carlos said he repeatedly asked to talk with a psychologist about his angry feelings, but was only allowed to once. Lawyers for the detention center deny he made these requests and say he met repeatedly with a psychiatrist who prescribed him medicine, and that he spoke with a licensed professional counselor once a week. The detention center also denies punishing children for self-harm, or confining them for things like complaining about a headache. Any use of force or restraint, its lawyers said, was justified and legal.

Investigators noted that the juvenile hall was “geared more toward a correctional philosophy and environment than a therapeutic model.”

In mid-2018, Gov. Northam ordered a state investigation of Shenandoah. Investigators interviewed kids at the facility, but only with staffers in the room—something Carlos’ lawyer, Hannah Lieberman, says may have skewed responses. They also reviewed case files and medical records at the facility, but were barred from making any copies or taking handwritten notes. Staffers confirmed they strapped children to a chair and placed mesh bags over their heads to prevent spitting or biting. A few children said they had been abused.

But investigators concluded that the harsh treatment described by kids did not meet the state’s legal threshold for abuse. While the facility did isolate children in their rooms, records suggested that, contrary to what the teens had claimed in the lawsuit, it never lasted more than 24 hours, and tended to be a handful of hours at a time. Investigators did note that the juvenile hall was “geared more toward a correctional philosophy and environment than a therapeutic model,” and recommended training staffers about youth development, deescalation strategies, and trauma-informed care.

A few months later, US District Judge Elizabeth Dillon ruled in December 2018 that there was enough evidence to proceed to trial on claims that staffers used excessive force and restraints on Carlos. But she rejected his claim that the juvenile hall provided mental health care so inadequate that it violated his constitutional rights. “Not surprisingly, plaintiffs desire and advocate for a best practices approach, but the law does not require best practices,” she wrote. “Rather it requires constitutional practices, and that is the issue before the court.”

The district attorneys aren’t buying that argument. In their amicus brief, they argued that “the conditions in which children are detained must account for, and not exacerbate, their trauma.” It is undisputed, they wrote, that many immigrant teens arrived at the Virginia juvenile hall with depression, conduct disorders, anxiety disorders, and PTSD, and that some engaged in self-harm there. “Shenandoah Valley Juvenile Center has egregiously and repeatedly departed from accepted professional norms—including failing to provide adequate mental health treatment to children in its care with known mental health issues and using punitive measures including lengthy solitary confinement,” they wrote. Isolating kids and tying them to a restraint chair for lashing out, they added, would likely worsen mental health problems like panic attacks, suicidal thoughts, psychotic symptoms, and hopelessness. “Because of their special vulnerabilities and needs as adolescents, the use of these approaches is a cruel and harmful practice…and can have long-term deleterious consequences that are difficult to remediate,” Gregory Lewis, a Chicago-based licensed psychologist, wrote in earlier court filings.

Carlos’ attorney, Lieberman, is now appealing to the Fourth Circuit Court of Appeals. “Punishing kids for behavior that is the consequence of trauma exacerbates the preexisting harm to which they’ve been exposed,” she says. “It’s antithetical to acting in accordance with any kind of professional judgment.” Next month, a juvenile hall in California will stop holding unaccompanied minors for the Office of Refugee Resettlement, which will make the Virginia facility the only one in the country that still does.

In 2018, the teen who recalled crying in the restraint chair after hitting his fist on a door chose to go back to Honduras. Before he left, he gave the court a statement: “I want us to be treated as human beings.”