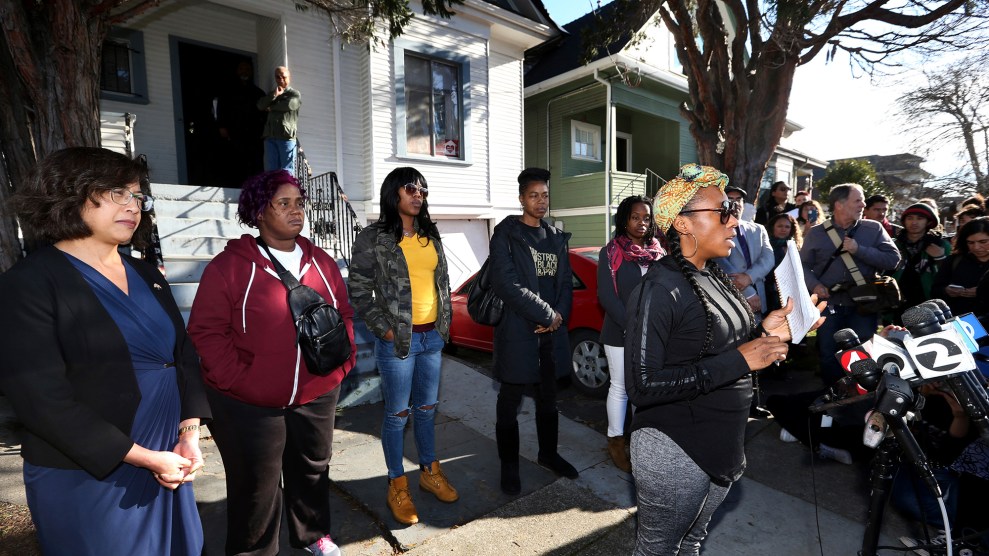 Before dawn on Tuesday, the Alameda County Sheriff’s Office descended on a residential block in West Oakland with armored vehicles, guns drawn. The thirty-some officers—including a contingent in military-style fatigues and helmets—showed up not to respond to a riot or the apocalypse, but rather to enforce the eviction of a handful of mothers and their children, a group who has turned their occupation of a house into a (peaceful) protest movement under the banner Moms 4 Housing.

Did you know the Alameda County Sherrif’s office has a tank and soldiers with AR-15s? They’re out here evicting and arresting the @moms4housing at 5am. There is nothing happening at 2928 Magnolia St that justifies this level of force. pic.twitter.com/5zBEgwPVIl

As I reported last month, the moms started squatting in a vacant home on Magnolia Street in November and immediately made their presence known. They accused the owner, Wedgewood Property Management, of exacerbating the housing crisis rocking the Bay Area through its speculative real estate practices, and they asked the house-flipping company to turn the house back over to the community. The women’s message struck a chord with local residents fed up with skyrocketing rents and homelessness. (Oakland’s homeless population shot up by 47 percent in just two years.)

Hundreds of volunteers and community supporters mobilized over the past few months to fix up the house, raise money for the moms, and defend them from eviction. Oakland city council members, including Nikki Fortunato Bas and president Rebecca Kaplan, even got behind the moms and attempted to negotiate the sale of the home to the Oakland Community Land Trust, a nonprofit that stewards permanently affordable housing and land assets on a community’s behalf. Still, Wedgewood refused. When Bas reached out to the company’s CEO to offer help in facilitating a meeting with Moms 4 Housing and the land trust, she says the message she got back read: “I will never negotiate with criminals.”

“I was really moved by the story of the moms. They’re working, they’re going to school, they have very young children. They have worked within the system to find resources, and the system isn’t working for them,” Bas told Mother Jones earlier this month. “Sometimes our laws don’t always align with what is just. What the moms are doing is an act of nonviolent civil disobedience, saying that there was a human right to housing, a right to adequate housing.”

In December, Moms 4 Housing filed a right of possession claim to the house, but on Friday a judge ruled against them and ordered the sheriff’s office to evict them. Hundreds of supporters came out to block a potential removal Monday evening. Sergeant Ray Kelly, a spokesperson for the Alameda County Sheriff’s Office, told KTVU that the department had no plans to evict the moms Monday night and wanted a peaceful resolution. “We can deal with passive resistance. That’s fine,” he said. “It’s one of those you can’t win situations for law enforcement…It doesn’t benefit us to be confrontational.”

In reality, the police waited until just after 5:00 am Tuesday to arrive, and they brought along a tactical team and battering ram. (The department said the doors were barricaded.)

I was inside the house when this happened and it was absolutely terrorism. A small army of heavily armed white men busting down the door. What if the babies had been in there?

I hope every single person who had a hand in what happened to the Moms this morning never sleeps again https://t.co/FeNrkdjnzW

Two moms, Misty Cross and Tolani King, and at least one community supporter were arrested Tuesday. No children were home at the time. Dominique Walker, another mom living in the house and the public face of the group, wasn’t arrested as she was appearing on Democracy Now! at the time of the eviction. She left mid-interview when she got news of what was happening, and Cross and Tolani were released later in the day Tuesday.

“They came in like an army for mothers and babies,” Walker said as she teared up at an impromptu press conference just after the eviction. “I feel like I should be standing with my sisters, but I’m standing right here for them. Right now. This movement is just beginning, and we see what we’re up against, but we also see what they’re afraid of. They’re afraid of us mobilizing over 300 people in 15 minutes. That’s what we did. Because we all care, and we all have humanity, and we want to change this system.”

“If you’re not angry, you should get angry that our tax dollars went to this extreme force to evict mothers and children,” Walker added. Kelly said the eviction process cost tens of thousands of dollars.

Speaking with journalists later on Tuesday, Kelly said the department succeeded in its mission to keep the eviction “simple,” “non-confrontational,” and as “low key as possible,” noting that no one was injured and the arrests were executed peacefully.

“We made tremendous steps to make sure we did not look like a militarized force going in there,” he noted. “We didn’t want to go in there with a heavy footprint…but knowing some of the threats that were out there and some of the things that had been said, we had to have people on standby.”

Crowd shot: supporters of @moms4housing have basically shut down this entire block in West Oakland.