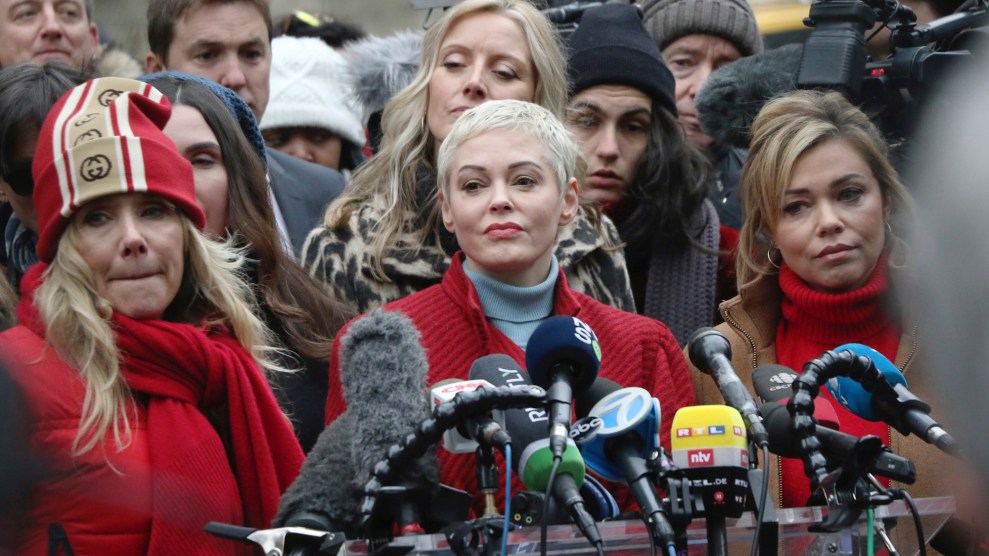 When Harvey Weinstein was convicted of rape and sexual assault in a New York City courtroom on Monday, it wasn’t just vindication for the two women whose experiences were at the center of the trial—it was a victory for the scores of “Silence Breakers” who have accused the once-powerful Hollywood mogul of sexual assault and harassment. Following the verdict, 18 of Weinstein’s accusers joined a conference call to celebrate the verdict, praise the six women who testified against him, and express hope for continued cultural and legal change in the wake of the MeToo movement.

Here are excerpts from their statements:

Rose McGowan: Every one of us who’s come forward, we have a name, we have a history, we have a life, we are more than Weinstein. But today because of the brave women who bared their deepest hurts for the world to see, he’s in Rikers Island. For once, he won’t be sitting comfortably. For once he will know what it’s like to have power wrapped around his neck. Today is not a referendum on Me Too. This is taking out the trash.

Mira Sorvino: I don’t think you can understand if you haven’t been through this, and haven’t gone public, how immensely difficult and life-changing it is to bring out some of the worst memories in your life into the public eye and become the fodder for debate, for gossip, even for pity…Harvey Weinstein has haunted many of our lives, even our nightmares, long after he initially did what he did to each one of us. We have finally taken that power back…To any survivor out there who is scared and hopeless and doesn’t know what to do, know that we are here for you and there is hope and love as light and community.

Dawn Dunning (who testified in the New York trial): This has been a crazy and traumatic experience, but I’m really happy to hear the verdict today. Mainly my overwhelming feeling is that it’s really nice to see that money and power doesn’t make you completely untouchable. Your voice can be heard and justice can be served.

Zoe Brock: I’m crying right now, because I expected the worst. Because, for us, the worst keeps happening. In Hollywood especially, for sexual assault victims, the worst keeps happening. When Roman Polanski got a standing ovation at the Venice Film Festival last year, I really just anticipated that Harvey Weinstein was going to get off today, and that he would make a comeback, and that he would go to the Oscars, and that he would win again. But that’s not going to happen. Because now Harvey Weinstein is a convicted rapist. And right now he’s sitting in Rikers jail. And I am so happy about it.

Jessica Barth: We spoke out against arguably the most powerful and the most vindictive producer in Hollywood, and that has not been without sacrifice on each of our careers, personal lives, wellbeing, and yet we kept going. We kept fighting, and we kept doing the work, in order to ensure justice for each and every victim of sexual harassment and assault and accountability for sexual offenders everywhere. The jury convicted Harvey Weinstein of rape without physical evidence, which means our voices as victims and survivors are finally enough.

Larissa Gomes: I was floored, I was ecstatic, to read the words “guilty” on my news headline notification on my phone this morning as I drove my son to preschool… The courtroom can be a vicious battlefield for any woman who dares to utter a claim of rape. And it took the courageous voices of six women who testified to make this happen. In fighting for their truth, they’ve already dignified themselves far above the power of any court… This trial has become a symbol—we’ve seen the manifestation of some of the deepest issues in our culture. And now it serves as a platform, a huge platform, to turn our pain into purpose and to reflect on a safer world that we all want to live in. We’re never going back to the way things were.

Louisette Geiss: I am the lead plaintiff against Harvey Weinstein in the civil case. And I did that because at the time I did not have the option to go after him criminally. And I just would like to say to those women who stood up to him in court: I am grateful to all of you for stepping up in the criminal case. I wish we could have all been there, honestly, to support you… I’m working now, tirelessly to try to make some changes in the law because really that is the next step for all of us.

Jasmine Lobe: It is important to remember the difficulty in getting to this verdict. The jury was made up of seven men, and just five women. That is difficult in and of itself. But it’s even more difficult to find 12 people who can be impartial when it comes to the atrocious acts Harvey Weinstein committed over many decades. This is a watershed moment in history.

Rosanna Arquette: Although we prayed that he would be [convicted] on all five counts, this is a step in the right direction. It’s vindication for all the women that he has harmed, and gives hope to other victims, that when they report a crime, their voices will be heard… Moving forward, we must actively pursue strengthening laws and closing loopholes in our criminal system so that more rape cases will be prosecuted, and rapists will be held accountable for their crimes. But today, let’s focus on the progress that has been made.

Lauren Sivan: Victim shaming will not work as a defense anymore. We saw it during the Cosby case, and now it’s been confirmed during this Harvey Weinstein case, that there’s no such thing as the perfect victim. A victim that didn’t keep in contact, didn’t have consensual acts. It shows that rape is rape, sexual assault is sexual assault, no matter the victim’s behavior, no matter what they wore, what they said, what they did. I’m so grateful that the jury saw through that.

Louise Godbold: All of the women who testified are so immensely strong and brave, and we’ve all been standing on the sidelines, cheering for them, because sadly, with the statute of limitations, many of us will not able to press all cases… They were the ones that were on trial. They were the ones whose phones were seized, whose every last photograph and email was scrutinized, their medical records, scrutinized. Harvey didn’t have to go through that. How is that fair? So we have to look at the way that we press charges, the way that we conduct these trials to find a way that is less traumatizing, so that more sexual assault survivors will have the courage to come forward and not fear that there’ll be a second violation and a second traumatization.

Paula Williams: All the the women took the stand, I’ve watched them walk through fire. In fact, I’ve watched all of us silence breakers walk through fire. And luckily, we found each other along the way. How lucky are we? I know that not all women in the future will have the luxury and the support of what we found… But I do hope that what’s happened today and all the work that we’ve done will serve as a beacon for all the future silence breakers.

Rowena Chiu: For all the inability in 1998 to press criminal charges, and then again in 2017, when I was unable to bring a civil case due to the limitations of the law, and the statute of limitations issues the others spoken about, I began to see the criminal trial as a kind of proxy for all the things that I couldn’t have done… Having raised my voice so very recently, I now am not going to stop raising it. I want to raise it for those women of color and those who are underrepresented and those who are working for an hourly wage, because they are all part of the MeToo movement too.

Erika Rosenbaum: Along the way we’ve received messages from hundreds of thousands of people, just giving us strength and saying we believe you, and saying we are you. I really feel like today’s a victory for every single one of them too… The one that stuck with me, a woman named Amanda wrote to us and said that “I’ll never forget the moment I first read your stories, and what the outpouring afterwards felt like because things have never felt the same since.” And that’s exactly how I feel. Things will never be the same.

Lisa Rose: I thought I’d feel really jubilant. In fact, I’m just really relieved, and I’m really glad that he’s going to prison… I want to thank all those women who were brave enough to speak out, but it in fact, I don’t think it should be a matter of being brave, because I think it’s just a matter of right and wrong.

Caitlin Dulany: To me, it’s like the sky is blue again. I’m very emotional. I’m thrilled. And I just want to thank all of the women who spoke out against Harvey Weinstein, this man who who seems impervious to the law, no matter who he harmed and for how long.

Sarah Ann Masse: This is only the beginning. We will keep fighting, and we will see you all in Los Angeles. So, to Harvey, all the abusers, rape myth perpetuators, victim blamers, and those who have retaliated against us—this one’s for you. Your time is up. The time for survivors to rise up and thrive has come.