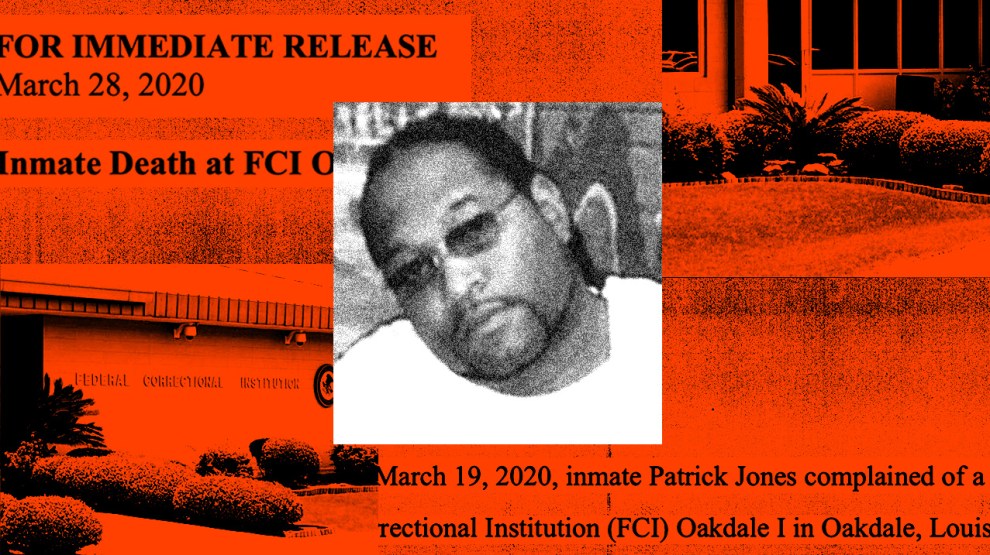 Christopher Walker’s father, Patrick Jones, died on March 28—the first federal prisoner to die from the coronavirus. He was incarcerated in Oakdale, Louisiana, in a facility where four others have since died from the disease. Jones, 49, was serving a 27-year sentence for a drug conviction; the victim of draconian and inequitable sentencing policies, he’d been trying for years to apply for release. In February, a federal judge refused his latest request.

Walker, 33, lives in Dallas and always thought he’d see his father again, that someday, sooner or later, his father would come home. On Saturday, Walker and other members of Jones’ family held a service in Temple, Texas, to say goodbye. Advocates for prisoners are calling for widespread release of people behind bars to protect them from the spreading coronavirus. This is Walker’s story, in his own words, lightly edited for length and clarity.

My father called me all the time. Every month, for 10 minutes. He was always talking about getting out.

I heard that my father died from my grandmother. She called me. And then I saw this clip on the internet about the first inmate who died from the coronavirus and at first I thought it could not be him.

My father called me all the time. Every month, for 10 minutes. He called me a week before, maybe more. It was the middle of March. But when he called me that time, I didn’t get to answer because I was at work, working at a warehouse. That was the last time he called me. But the last time we spoke was a month ago, not too long ago. He said he was putting in to come home, that Trump maybe was going to sign something. He was waiting on the answer as to whether he would be released. He was always talking about getting out.

The majority of my time growing up, I was good, I wasn’t trying to see him. I knew one person who knew him, who used to tell me about my daddy when I was real young, like 10 years old. He stayed next door to my house. He was locked up with my father. He was real cool. He used to tell me that my dad used talk about me. That’s when I was young and I used to be like, “I don’t care.”

I just found him and reached out. I had a little girl. She’s 14 now. When I had a daughter of my own, I thought about what it means to be a father. And I wanted to meet him and I wanted her to meet him. It was cool—we drove down to Temple, Texas, where he was staying. It was an apartment complex. We sat and talked. It was a short visit. But it was it was cool.

Then, right after that, right after we met, a couple months after that, he caught that charge and he went to prison. It was like we were just starting, and then it stopped. But after that, we did stay in touch. I ended up going to prison too, and he started writing me from the prison he was in. We were writing from prison to prison. We would write letters. He was mostly trying to keep me level-headed. The letters, they helped. Talking to someone experiencing the same thing, it helped. He would give me good positive advice, on how a man should carry himself. I turned 21 on the street, and by the time I had another birthday out on the streets I was 25. We were in touch that whole time.

When I talked to him on the phone, you’d think he’d been in jail for two or three days. He kept that same little vibe. At least with me on the phone, he was like he was immune to it. They lock up your body, but they can’t trap your mind.

When I was locked up, I was now put in his shoes and, you know, I could see where he was coming from. I had two kids, one on the way, when I went to jail. I didn’t meet the second until she was 2 years old. She’s now 11. I used to have a lot of anger toward my father, and then I was inside and used his situation to think about myself. I thought, everybody makes mistakes.

I got out. He was still in. But when I talked to him on the phone, you’d think he’d been in jail for two or three days. He kept that same little vibe. He was in jail for long time. At least with me on the phone, he was like he was immune to it. Maybe just on the phone, but he was always jiving and happy when we talked. They lock up your body, but they can’t trap your mind. You have to keep your mind going and keep it outside your body. You can’t think like you’re in a cage. You can’t think like that.

Inside, he was working in the bakery. He used to talk about baking cakes. He would say he wanted to get out and try to start a little cake company, to make birthday cakes for people when he got out. He was anxious, you could hear the anxiousness in him, about starting a business.

He didn’t make it. It’s kind of cold. It’s not a way to live your life, for your life to end that way. Especially when you’re trying to start your life over.

This article was reported in partnership with Type Investigations.