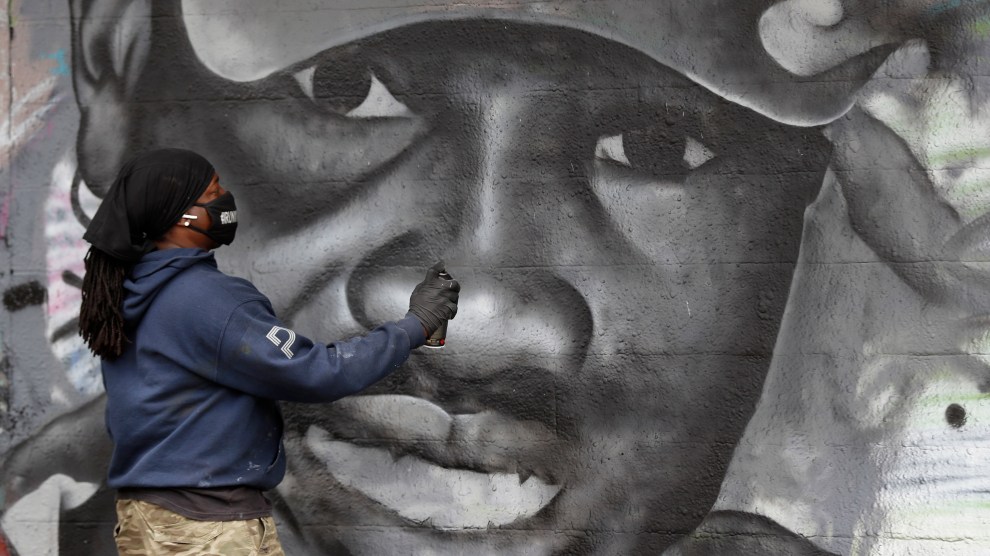 Artist Theo Ponchaveli paints a mural of the likeness of Ahmaud Arbery in Dallas.Tony Gutierrez/AP

Olivia Pearson knows what it’s like to be caught up in the criminal justice system in southern Georgia. In 2016, a local district attorney’s office indicted Pearson, a Black grandmother and civil rights activist, on felony voter fraud charges and threatened her with years in prison after she helped a first-time voter who didn’t know how to use an electronic voting machine.

The district attorney who pursued her case was none other than George E. Barnhill—a guy in the news this week for having failed to prosecute the men who killed jogger Ahmaud Arbery, a 25-year-old unarmed Black man.

“For the district attorney’s office to not charge these gentlemen, I couldn’t believe that,” Pearson told me this week from her home in Douglas, before pausing a moment: “Then again, I could believe it.”

In late February, Arbery was jogging down a shaded residential road in Satilla Shores, Georgia, when two white men in a truck pulled over in front of him and shot him. When a video of the killing went viral on Tuesday, the case sparked national outrage—especially after it came to light that Barnhill sat on the evidence for weeks without pressing charges. In a memo to police, Barnhill concluded that the men had acted in self-defense and did not violate any laws because they believed Arbery fit the description of a burglar.

Joe Biden said Arbery was “essentially lynched before our very own eyes.”

On Thursday, after former Georgia gubernatorial candidate Stacey Abrams described the killing as “murder” and former Vice President Joe Biden said Arbery was “essentially lynched before our very own eyes,” the Georgia Bureau of Investigation arrested the two men. Gregory McMichael and his son Travis are now charged with murder and aggravated assault. On Friday, the Atlanta Journal-Constitution reported that Gregory McMichael, a former police officer, previously worked with Barnhill’s son, a prosecutor in the Brunswick DA’s office, to bring a criminal case against Arbery at some point before McMichael retired last year.

Barnhill recused himself from the case of Arbery’s killing because of this conflict of interest. But his reluctance to press charges has kept his name in the spotlight. “I can’t answer what another agency did or didn’t see,” Vic Reynolds, director of the Georgia Bureau of Investigation, said in reference to Barnhill’s office during a press conference. “But I can tell you that…probable cause [for an arrest] was clear to our agents pretty quickly.”

For Pearson, hearing Barnhill’s name in the news again brought the memories of her own case flooding back. In 2012, Pearson was a longtime city commissioner who often ferried people in Douglas to the polls. On the first day of early voting that year, during a visit to the local elections office, a 21-year-old Black woman named Diewanna Robinson asked Pearson for assistance with the electronic voting machine. Pearson says she told Robinson where to insert her card into the machine, and instructed her to follow the prompts. Pearson then walked away before Robinson began filling out her ballot.

Pearson didn’t think much of the encounter—but it would come back to haunt her. Four years later, after a voter fraud investigation by the secretary of state’s office, Barnhill’s office decided to have Pearson arrested for the incident. When Pearson assisted Robinson, poll workers had asked her to sign a form allowing her to help someone struggling with the machines; she did so, not realizing that by adding her signature, she was agreeing to help only those who were disabled or illiterate. (Robinson was neither.) The district attorney’s office charged Pearson with felony voter fraud and threatened her with 15 years in prison. The day she was indicted, “I was just devastated,” she told me over the phone this week.

Barnhill’s office brought Pearson to trial for alleged voter fraud twice, before she was ultimately acquitted.

Though Georgia has a reputation for passing strict voter rules, it was highly unusual for a prosecutor’s office to pursue charges for such minor violations, as Josie Duffy Rice pointed out in an op-ed for the New York Times. From 2014 to mid-2017, the state investigated about 154 instances of alleged voter fraud, and just 10 were referred to a prosecutor, according to BuzzFeed, which brought national attention to Pearson’s case in 2016. Most of those cases were dismissed or closed without a ruling. But Barnhill’s office brought Pearson to trial not once but twice, before she was acquitted.

Pearson’s lawyers accused the district attorney’s office of taking Pearson to court to intimidate Black voters. The office also brought voter fraud charges against at least three other community members around the same time. Pearson believed prosecutors targeted her because of her political activism: She was the first Black woman elected to the city commission in 1999. Her mother was a top official with the local NAACP and helped sue the city in the 1970s to gain better political representation for Black residents. One of Barnhill’s deputies, prosecutor Ian Sansot, who oversaw the litigation against Pearson, denied any improper motive in the case, and argued he was just following the law and doing his job. At trial, he appeared to mock Pearson’s concerns about racial bias, according to BuzzFeed: “Isn’t it true that you think everyone who disagrees with you on this matter is a racist hater?” he asked. “No, sir,” she replied. But she added that she did believe race played a role in the decision to charge her.

“What hurts the most is: Douglas is home. I’ve worked in this community trying to do good for people all my life.”

Though Pearson was ultimately acquitted, the litigation took a toll on her health. She says she fell into a depression that she has struggled to emerge from. She ran for city commissioner again in 2019, and won, but she remains disheartened at how the city responded to her attempts to help Black voters all those years ago. “What hurts the most is: Douglas is home. I’ve worked in this community trying to do good for people all my life,” she tells me. “Achieving justice in south Georgia is a very difficult task when you’ve got people in the district attorney’s office like these people we got.”

On Saturday, Pearson will go to a protest in Arbery’s honor, a four-mile run in Waycross, the town where the district attorney is based. Because of a hip replacement, Pearson, 58, plans to drive the four miles in her charcoal-gray car, with a sign hanging outside that says, “I Run With Maud.”

“It’s so sad that we’re in the 21st century and we’re still going through this kind of stuff,” she told me over the phone, breaking into tears. “I mean, you would think things would get better. It seems like they’re getting worse.”