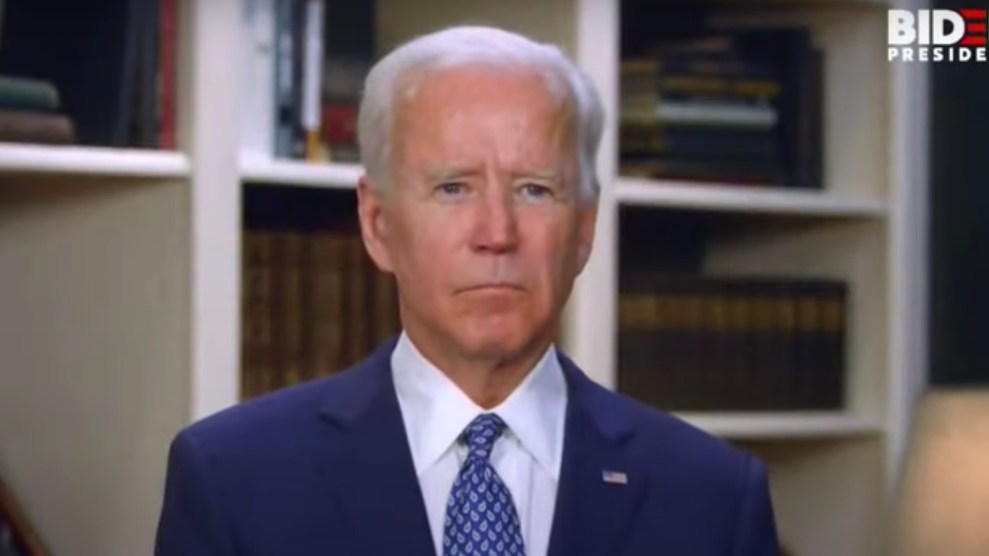 Joe Biden made a promise to the family of George Floyd, the African American man killed by a police officer in Minneapolis last weekend: As president, he will seek justice and enact “real police reform.”

In remarks streamed on YouTube Friday afternoon, the former vice president began by noting that he’d spoken with Floyd’s family earlier in the day. He described the killing as an “act of brutality so elemental” that it “denied [Floyd] of his very humanity and deprived him of his life.” He drew a line from Floyd’s death to those of Eric Garner, a Black man killed by New York City police officers who placed him in a chokehold; Breonna Taylor, a Black woman shot to death by police in her home; and Ahmaud Arbery, a Black man who was killed by white men while jogging in Georgia. “We’ve spoken their names aloud,” Biden said. “We chisel them onto our long-suffering hearts.”

Then Biden drew a longer arc. “It’s a list that dates back more than 400 years,” he said, calling upon the history of slavery, which he described as “the original sin of the country” that “still stains.” The consequences, he said, are “the norm black people deal with.” And he promised to “hold bad cops accountable” as part of an effort to address the systemic racism Black Americans experience.

Biden’s spoke for only five minutes, but it was long enough to draw a sharp contrast with President Donald Trump, who had vowed over Twitter to send in the National Guard to stop the rioting that broke out in Minneapolis after Floyd’s death. Trump called the protesters “thugs” and invoked a racist threat that dates back to the 1960s—”when the looting starts, the shooting starts.”

The President’s tweets had been Biden’s call to action on Friday morning. “Enough,” Biden tweeted. “[Trump] is calling for violence against American citizens during a moment of pain for so many. I’m furious, and you should be, too.” When he spoke Friday afternoon, he condemned the president’s words. “This is no time to encourage violence,” he said. “We need real leadership right now.” (After Biden spoke Friday, Trump claimed on Twitter that he had simply meant that “looting leads to shooting”—not that looters should be shot. “It was spoken as a fact, not as a statement,” the president wrote.)

Biden kicked off his presidential run last year by drawing a similar contrast to Trump, over the president’s handling of the deadly 2017 white supremacist riots in Charlottesville, Virginia. At the time, Trump said there had been “very good people” on both sides. For weeks, pundits have noted how Biden has dropped the “soul of the nation” message he relied on during the primary in favor of one emphasizing a “New Deal” to fit the scale of the pandemic-induced disaster. But on Friday, he revisited his old language, noting that “the very soul of America is at stake” if the country does not come to terms with the consequences of its long history of racism.

The outrage over Floyd’s death has offered new salience for that message. Biden ascended to the top of the Democratic ticket despite his controversial track record on issues related to race and criminal justice. As a senator from Delaware, he was an author of the 1994 crime bill that ushered in an era of mass incarceration and heavy policing. But he owes his presumptive nomination in large part to the support of Black voters—as well as to his ability to express empathy in office and on the campaign trail. On Friday, that empathy was on full display.