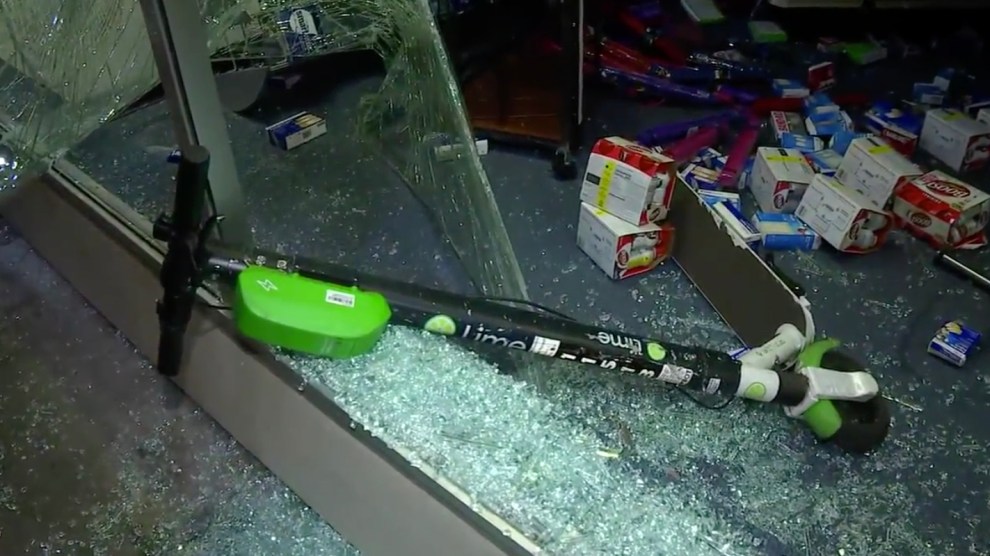 A scooter smashed through CVS window in Portland, Oregon.Screenshot/Fox 12 Oregon

As protests have erupted across the country following the police killing of Minneapolis resident George Floyd, demonstrators have deployed all the traditional tools of urban unrest to smash things up: bricks, bottles, rocks, and whatever else might happen to be lying around at the moment. In a sign of the times, one of the things lying around during many of these protests have been electric scooters. Light enough to be tossed around but strong enough to crack glass, the scooters are electric and, if hit in a certain way, they can explode. Protesters from DC to Salt Lake City employed them to inflict a remarkable amount of damage.

In Dallas, for instance, a few people smashed one through the window of a police car, and seemed surprised by the resulting sparks:

Portland, Oregon, was the scene of multiple scooter incidents, including the ransacking of a CVS, caught on tape by local news station Fox 12:

A similar smashing happened to other city windows:

“In these unprecedented times, Lime is here for you.”

And, finally, others in the city used a scooter to pummel a police car:

Minutes ago, people were smashing the windows on Portland’s Police cruisers on SW 4th and Yamhill. Police are telling people that this is a riot, and they must leave #LiveonK2 pic.twitter.com/7qyC3R0uLJ

Bird scooters were used in a few locations to break through windows. pic.twitter.com/SLpMb1iwaj

In Los Angeles, demonstrators even used scooters to create a cordon to block off a street:

Demonstrator in DTLA made a cordon blocking the road out of Bird scooters pic.twitter.com/aV8c63SG4k

Dockless scooters have been the source of controversy in many cities, sparking debates over the use of public space and the relative environmental merits of this new mode of microtransit. Even before this week’s protests, cities had been grappling with the fact that scooters have become a new form of litter, as people have chucked them on to subway tracks or into rivers and bushes. Fed up with the favorite ride of tech bros, opponents also have turned their wrath on the scooters themselves, setting fire to the them, tossing them in the ocean and off balconies. Given that history, it perhaps shouldn’t come as any surprise to the scooter companies or their municipal boosters that the scooters would play a role in civil unrest. Bird did not respond to a request for comment or questions about what it might do about the situation.