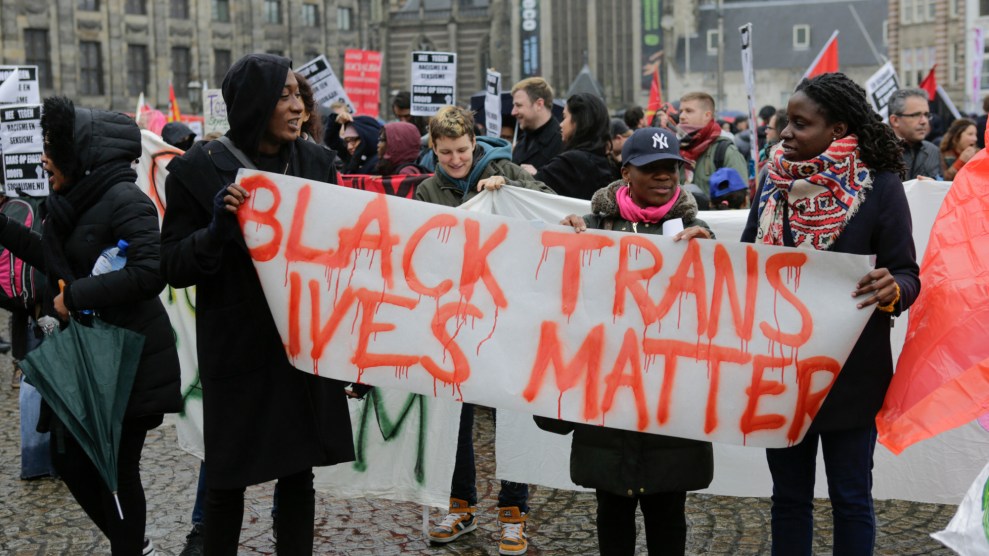 A Black trans person was killed in a police encounter in Florida, the "epicenter of anti-transgender violence."Sipa USA via AP

On Wednesday evening, while Minneapolis burned, several dozen mourners held a candlelight vigil in Tallahassee, Florida, for Tony McDade. McDade, a Black trans-masculine person, was shot and killed by police on Wednesday morning.

The circumstances surrounding McDade’s death are still murky. Tallahassee police say McDade was a suspect in a fatal stabbing that occurred shortly before his death. Police say he was armed with a handgun and he “made a move consistent with using the firearm against the officer.” An eyewitness told local media that police never tried to deescalate the situation:

“I walked down this way, as soon as I get around this curve, I just hear shots,” [Clifford] Butler told WFSU. “I see [McDade] right behind the tree, but I see for him (the officer) just jump out the car, swing the door open and just start shooting.”

Butler says he never heard the officer who fired shots give any warning beforehand.

“I never heard ‘Get down, freeze, I’m an officer’—nothing. I just heard gun shots,” Butler said.

The police have not released the name of the officer involved—thanks to a Florida law that allows officers involved in shootings to be classified as victims to protect their privacy—but witnesses said that he was white.

“Tony was a queer Black American who was gunned down by law enforcement,” says Gina Duncan, director of Transgender Equality for Equality Florida, a statewide LGBTQ advocacy organization. “Nothing can erase that. Talking about Tony’s earlier brushes with the law should not diminish the humanity of this being a person who is now dead and certainly shouldn’t diminish the fact that society failed Tony. Tony was calling out for help and society failed Tony in so many ways.”

McDade’s death comes on the heels of the high-profile deaths of Breonna Taylor and George Floyd—who were killed in police encounters in Louisville and Minneapolis, respectively—as well as multiple local police shootings that have received less national media attention. Since March, Tallahassee police have fatally shot three people—all of whom were Black. The most recent shooting, of a 69-year-old man named Wilbon Woodard, occurred just a week prior to McDade’s death. On March 20, 31-year-old Mychael Johnson was shot to death by officer Zackri Jones, who was also involved in the shooting death of a white man in 2015 (Jones was later cleared of wrongdoing by a grand jury).

“Today’s tragic loss of lives affects our entire community. This comes on the heels of disturbing events around our nation that we will not ignore,” Tallahassee Mayor John Dailey tweeted on Wednesday in response to McDade’s death. “The Tallahassee Police Department has committed to a thorough investigation of the events surrounding today’s murder and officer-involved shooting, and we are asking the public to share any information they have about the incidents with TPD.”

“What brings Tony McDade’s murder so close to home is that this is a national pandemic,” Duncan says. “We have not only COVID-19 impacting our nation, but also the the virus of institutional racism. No matter what your gender, no matter how you identify, we still have this pervasive culture of Black Americans suffering under overt discrimination by law enforcement. And when you look at the big picture, Tony McDade’s shooting is a symptom of that national virus that we’re dealing with as a country.”