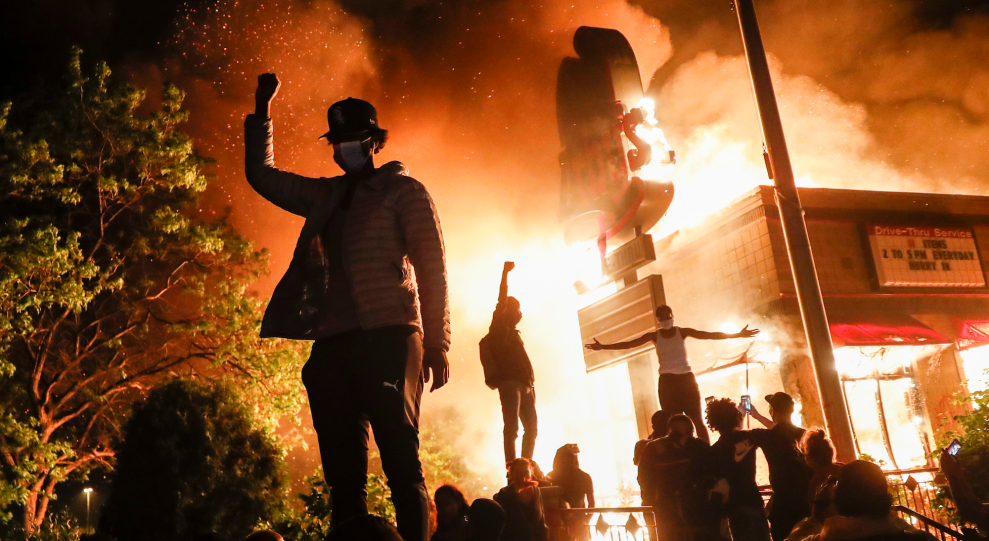 As fires raged across Minneapolis in response to the death of George Floyd, President Trump on Friday labeled protesters demanding justice  “thugs” and warned that “when the looting starts, the shooting starts.” He also lashed out at Minneapolis Mayor Jacob Frey, whom he called “very weak.”

Trump’s late-night threat came as protesters set fire to the Minneapolis Police Department’s Third Precinct building, the base for the officers involved in Floyd’s killing on Monday. Shortly after, Twitter flagged Trump’s tweets for violating the company’s rules but determined that they should remain on the site out of public interest.

“Weakness is pointing your finger at somebody else during a time of crisis,” Frey said at a press conference responding to the president’s attack. “Donald Trump knows nothing about the strength of Minneapolis. We are strong as hell. Is this a difficult time period? Yes, but you better be damn sure that we’re going to get through this.”

Thursday marked the third night of protests after a graphic video showed Derek Chauvin, a white police officer, pinning Floyd to the ground while kneeling on his neck during an arrest. “Please, I can’t breathe,” Floyd is heard pleading in the recording. The four police officers involved in Floyd’s death were swiftly fired and protesters are now demanding criminal charges be brought against Chauvin.

Floyd’s words, “I can’t breathe,” have since become an all too familiar rallying cry for protesters in Minneapolis and cities across the country.