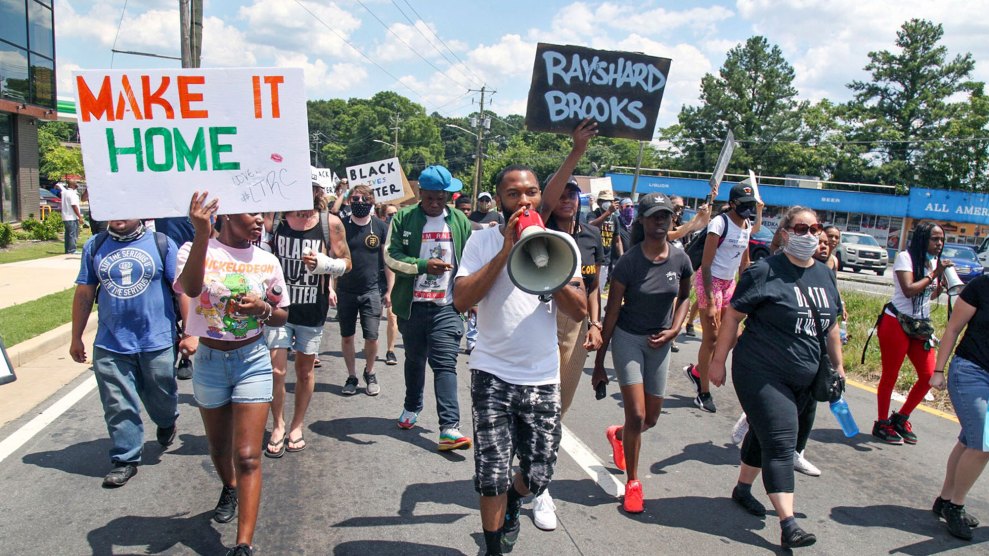 Protesters on Saturday gather on University Avenue near the Atlanta Wendy's where a cop shot and killed Rayshard Brooks.Steve Schaefer/Atlanta Journal-Constitution via AP

Atlanta’s police chief has resigned less than 24 hours after a cop shot and killed a Black man as he ran away from police at a fast-food drive-through. Erika Shields will remain with the city “in a role to be determined,” Mayor Keisha Lance Bottoms announced Saturday.

Bottoms said she had ordered that the officer who shot his gun be fired. Another officer has been placed on administrative duty.

The encounter began Friday night when officers found that Rayshard Brooks, 27, had fallen asleep in his car at a Wendy’s drive-through, causing other customers to drive around him, according to the Georgia Bureau of Investigations. Police gave Brooks a sobriety test. After he failed, the two officers tried take him into custody, but he “resisted and a struggle ensued.”

An eyewitness video posted on social media overnight shows cops trying to pin Brooks on the ground, one of them with his taser drawn. Brooks grabs the taser and runs away with it, off camera, after which gunshots can be heard. On Saturday evening, the GBI released a surveillance video in which Brooks can be seen running away. He turns as he runs and aims the taser at one of the officers, at which point the cop shoots him with his gun.

Brooks later died at the hospital.

In its initial account, the bureau had said Brooks “was shot by an officer in the struggle over the Taser.” This was revised after the GBI had obtained the surveillance video.

Bottoms said she was setting up an advisory committee to examine Atlanta cops’ use of force and expected feedback within the next two weeks.

MAYOR: Because of her desire that Atlanta be a model of what meaningful reform should look like…Chief Shields has offered to immediately step aside as police chief, so the city may move forward with urgency rebuilding the trust so desperately needed..pic.twitter.com/UepWvTgIqR

The mayor also addressed the family of Brooks: “There are no words strong enough to express how sincerely sorry I am for your loss.” She said she hoped the family can see the “swift actions that have been taken today and the meaningful reforms that the city will implement.”

Georgia’s NAACP had called for Shields’ dismissal earlier in the day. “There was nothing that [Brooks] did that was deserving of death,” said Rev. James Woodall, president of Georgia’s NAACP.  “Our overall message is that we are done dying,. We are done waking up at 1 or 2 in the morning to another murder or yet another case of police brutality.”

@KeishaBottoms, @Atlanta_Police needs a serious overhaul. The continuation of these kinds of actions require immediate resolution. Instead of seeing an improvement, it continues to happen day after day.